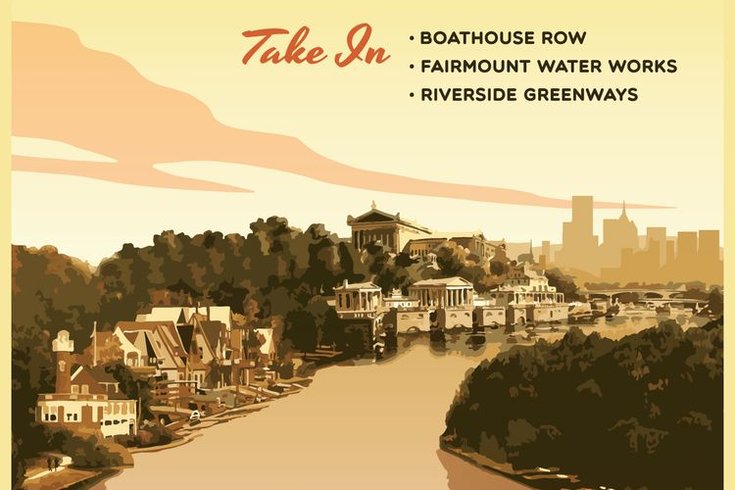 Schuylkill River poster at Philly Outside.

If you've got some empty space on your wall, a faraway friend or your dad's pint glass collection is looking a little bit weathered, there's a great new collection of vintage, Philadelphia-themed merchandise that should fit right in with the rest of your local pride pieces.

A new collaboration between Richmond-based retailer Andy Thompson, the Friends of the Wissahickon, the Fairmount Park Conservancy, and artist Matt Brown features a series of four park-themed designs that celebrate Philadelphia's most iconic outdoor treasures. A portion of all proceeds will go to both organizations' efforts to preserve the parks for current and future generations.

Poster series at Philly Outside.

"The whole idea stems from the National Park Service poster series in the 1930s and 1940s," Thompson told PhillyVoice.

Thompson, a Philadelphia native and former outdoors columnist for the Richmond Times-Dispatch, launched his first "Outside" store in Richmond to honor the best spots in the James River Park System.

"People really responded to that. They were into the retro, vintage style," Thompson said. "It's all well priced and the proceeds go to people who are helping preserve these spaces. Why not help the organizations who are safeguarding and championing the environment?"

To get things going in Philadelphia, Thompson reached out to the Fairmount Park Conservancy and the Friends of the Wissahickon to pin down the top four spots in both parks: the Schuylkill River, Belmont Plateau, Wissahickon Valley, and Valley Green.

"We worked together on the concepts and what's important about each place, whether it's hiking or horseback riding or rowing," Thompson said. "You want it to have that classic feel."

Brown, a graphic designer at Punch Creative in Richmond, captured the spirit of the landscapes and people at each place.

"Matt really brought it all to life," Thompson said.

In his experience so far, Thompson says customers love the stores — Richmond, Washington, D.C. and Philly — when it's time to buy a gift.

"Christmas is always the busiest, but people respond differently. College kids like the posters, pint glasses make a great Father's Day gift and T-shirts appeal to everyone. There's a wistful feel about it."