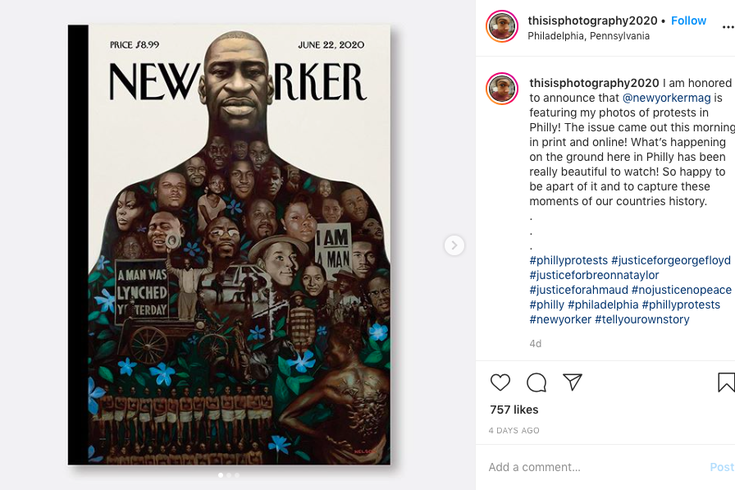 Black and white photos taken by Philadelphia ceramics artist Isaac Scott show some of the most dramatic and moving moments of the city's protests demanding justice for George Floyd. Scott, a Temple student, had some of his photographs featured in The New Yorker.

A series of black and white photographs taken by a Philadelphia artist during Justice for George Floyd protests were featured in The New Yorker this week.

Isaac Scott, a 29-year-old ceramic artist, told the magazine he began taking photographs when the coronavirus pandemic shut down classes at Temple University, where he studies ceramics at the Tyler School of Art.

RELATED ARTICLE: Bandcamp database highlights the music of black artists from around the world

After George Floyd was killed in the custody of Minneapolis police on May 25, Scott decided he would throw himself into documenting the protests that began five days later in Philadelphia. The Madison, Wisconsin, native told The New Yorker he was willing to take risks to do so:

"I was teargassed twice," Scott said, as he took a morning break. "People were getting maced by the cops at point-blank range." He is hardly an experienced conflict journalist, and yet he would regularly get as close as he could to the front lines—and that meant being close to agitated police in riot gear. "I'm a six-foot-three black dude and I knew they'd have no issues beating me, and people like me, over the head," he said, describing one particular moment of confrontation and fear. "I could only see things like that if I was really up close and with people. That was the kind of thing I was there to capture."

Scott has a more extensive collection of photographs from the protests on his Instagram page.

While I have a lot of issues with recent photo ops by police and politicians, I do want to share these photos I took of black officers playing a pickup game with black young men in center city. I felt it was a genuine moment shared by people who just wanted to play ball. We live in a crazy time where moments of human interactions are becoming rare and increasingly dangerous. In these brief moments both sides were able to just be human. They could put down their badges and their protest signs and pick up a ball. Ultimately all signs of solidarity are meaningless in the face of inaction and inadequate policy. We must keep up the fight till we see our communities get funding and our current state of policing is dismantled. I hope moments like this are commonplace in the world we build on the other side. . . . #blackfirst #humanfirst #defundthepolice #fundourcommunities #ballin #basketball #justiceforgeorgefloyd #justiceforbreonnataylor #justiceforahmaud #phillyprotest #📸 #tellyourownstory

The protests in Philadelphia have ushered in some long-awaited changes, such as the removal of the Frank Rizzo statue at Thomas Paine Plaza, and brought promises of comprehensive police reform in Philadelphia.

More than a dozen protesters are taking legal action against police who used tear gas and pepper spray during a demonstration on the Vine Street Expressway, an incident that remains under review by the police department's Internal Affairs division and the office of Philadelphia District Attorney Larry Krasner.

The D.A.'s office continues to take reports of official misconduct during the protests.

Beyond Philadelphia, high profile incidents of police brutality against black men and women have resulted either in criminal charges or officers being dismissed from their departments.

Apart from charges against all four Minneapolis police officers seen on video involved in Floyd's death, former Atlanta police officer Garrett Rolfe has been charged with murder in the June 12 shooting of Rayshard Brooks. In Louisville, former police officer Brett Hankison was fired more than three months after Breonna Taylor was killed in her apartment by police.