Relics of the past back on display 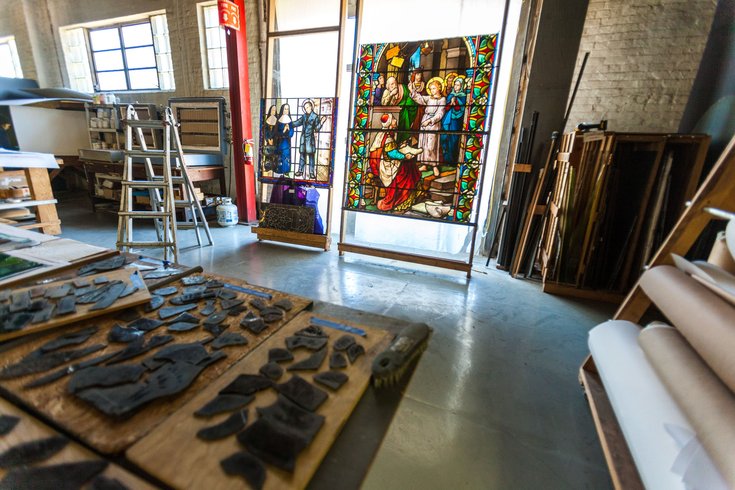 Windows salvaged from Our Lady of the Rosary parish at 63rd and Callowhill streets.

Read More
A 25-foot stained glass window shatters onto the floor of a cathedral, ringing in an empty room.
It’s every designer’s worst nightmare. And a call few will ever get.
Except for one: Joe Beyer, owner of Beyer Studio in Northwest Philadelphia, whose stained glass studio has made it a mission for the last 20 years to rescue old windows from annihilation.
Through the Sacred Window Rescue Project, Beyer facilitates the transfer of stained glass windows from a closed church in Philadelphia to a new owner. He doesn't negotiate sales, which go through the governing church body, usually the Roman Catholic Archdiocese of Philadelphia. What he does do is restore, catalog and maintain these windows in storage until a buyer is secured.

"If I'm not making a dollar from that sale... then I can give advice to both sides, buyer and the seller, without creating a conflict of interest," Beyer told PhillyVoice.com.

The project responds to calls from the Archdiocese of Philadelphia when it decides to shut down a church. They send out a crew to photograph and excavate the windows from the building, then take the glass back to the studio, where they clean it and touch up details with vitreous paint, which "gets fired into the surface of the glass like a ceramic glaze," Beyer said.
About 600 stained glass panes sit in storage at the studio, waiting to be adopted by new congregations.
Churches, like communities, can fall apart. When a congregation moves to another city, often down South in pursuit of work, it is looking for something new. A new church becomes the priority, while the former house of worship falls into disrepair within 30 years.
“All the people who went there, they’ve established their culture to the point where now they want some of the trappings they remember from life back East,” Beyer told PhillyVoice.com. 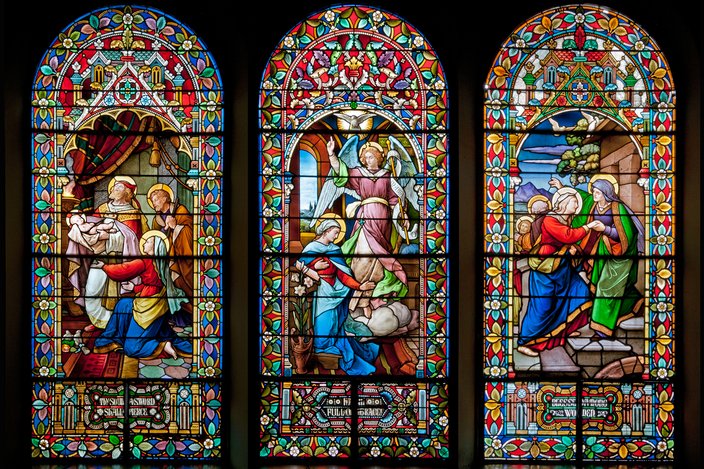 Three glass windows from Our Lady of the Rosary slated for Anchorage, Alaska. (Neil Cippon / Beyer Studio)
The lead putty that holds stained glass in its place erodes over nearly a century of exposure to the elements, and giant windows made in the early 19th century by the Munich School of Design are left barely clinging to their frames.
But vulnerability can find respite in the arms of a new parish. At the inception of the project, Corpus Christi Church in the Hunting Park section of Philadelphia was closed by the archdiocese. Another church in Berwyn had been destroyed in a tragic fire. In collaboration with Philadelphia church architect John S. Sabatino, Beyer helped recreate the burned-down church with “new” windows from Corpus Christi whose sale he facilitated from the archdiocese. In ideal cases such as this one, the architect builds the building around openings for windows.
“I like to say, we’re the tail that wags the dog. We will draw the windows… and [the architects] would incorporate that plan into their wall elevations,” Beyer said.
Getting glass ready for removal and rehoming is a dangerous process. Studio workers strap on Tyvek suits, respirators and surgical gloves to minimize contact with lead. They take each window apart piece by piece – some panes have thousands of minute parts – and clean them in shallow baths of carefully filtered water. Then they put them back together again.
“We’re good at puzzles,” Beyer said. 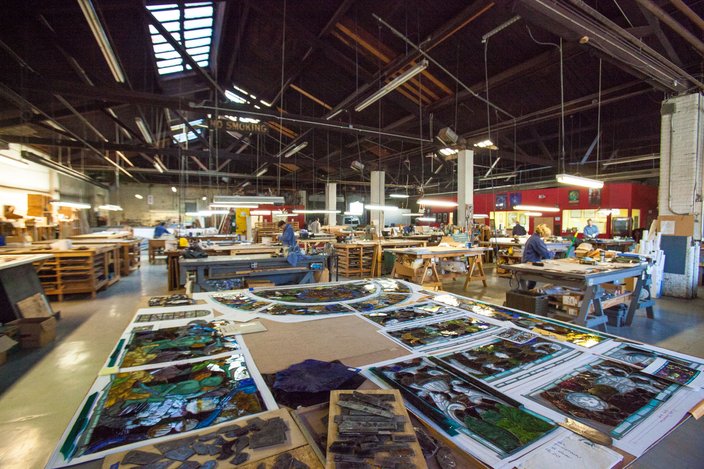 Artisans restore glass windows piece by thousandth piece. (Thom Carroll / PhillyVoice)
Photographing windows attracts potential adopters. They’re positioned in the best light possible, a tough task considering “your eye is a more sophisticated lens than what’s in a camera,” according to Beyer.
What’s so striking about the glass, though, is the sheer intensity of the color.
“You add minerals and metals to the recipe for glass, and that’s what gives it its color,” Beyer said.
Cobalt makes cobalt blue, a gorgeous aquamarine; coppers and cadmiums are used for red; and actual gold is mixed with pink to produce a rose gold the brilliance of which can’t be found any other way.
Ironically, for as delicate and fragile as it is, glass, if kept well, will outlast almost anything. Its color never fades, as those embedded particles become more lustrous as sunlight shines through them.
There’s hope yet for parishioners who feel displaced. While their churches may be closing, the most permanent features of those buildings – really, of the past – are finding new homes. Just like color, the glass will last as long as it remains intact.
“You can go to Europe and see cathedrals and see the glass, and it’s exactly the same as a thousand years ago. The color in the glass is forever.”