The conservative commentator made a splash in Minneapolis, though 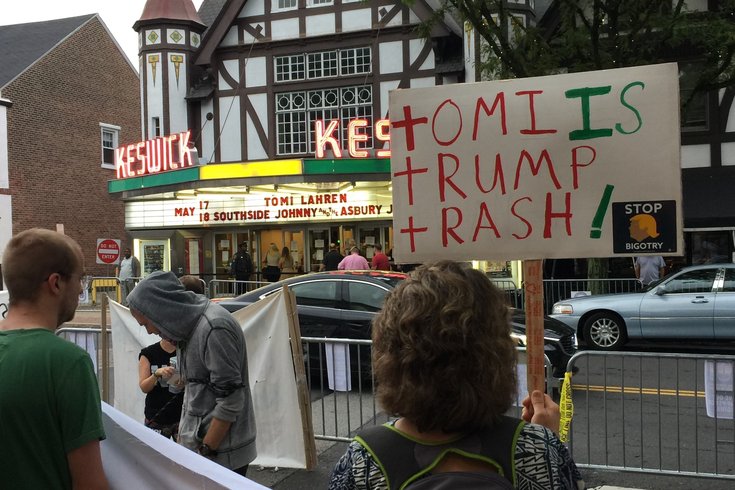 Several dozen protesters assembled across the street from the Keswick Theatre to object to Tomi Lahren, who they view as a 'propagandist for the Trump/Pence regime.'

Turns out, Philadelphia treated conservative commentator Tomi Lahren with a fair amount of respect. Certainly more so than she received in the City of Lakes.

Lahren, who brought her "Freedom, Family and Final Thoughts" tour to the Keswick Theater in Glenside last Thursday, was met here by local anti-fascist protesters who exchanged words with her supporters from opposite sides of the street.

The signs from her detractors included: “Tonight Only: Nazi Barbie,” “This Nightmare Must End” and “Stand Together With Love.”

A day earlier, her impending arrival was greeted by the words "Nazis Die" in spray-paint across the front of the Montgomery County theater.

The Fox News contributor retweeted an image of the graffiti, commenting, "Truth is the new hate speech. You don't intimidate me! See you tonight, Glenside."

Truth is the new hate speech. You don’t intimidate me! See you tonight, Glenside. https://t.co/uXaBi4bCFt

But the confrontation between First Amendment asserters was nothing a notable police presence couldn't keep in check.

With no shocking injuries to report, the 25-year-old lightning rod took her tour to Minneapolis, where she appeared at the Pantages Theater on Saturday night. 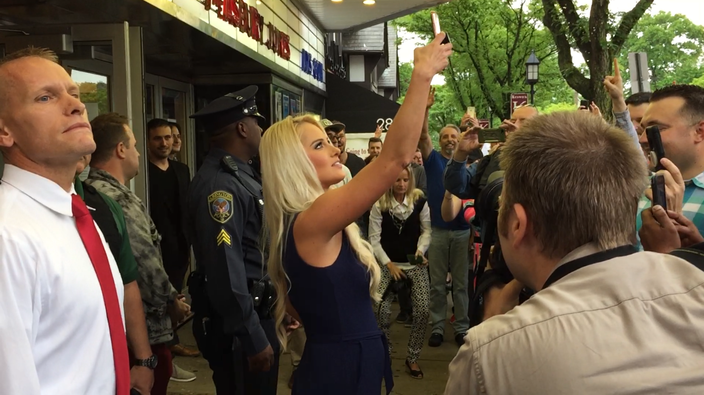 Tomi Lahren spoke with fans outside the Keswick Theatre before her speaking engagement started on Thursday, May 17, 2018. Much of the time she spoke, protesters drowned her words out from across the street.

Apparently the show went without incident, but things got interesting on Sunday, when the controversial firebrand and her parents were out to brunch.

According to local media, a viral video and Lahren herself, she was leaving the rooftop dining area of the Union Bar & Restaurant in downtown Minneapolis when a woman sitting at the bar tossed what appeared to be water from a glass onto Lahren (and apparently her mother) and bathed her in obscenities. There were no injuries.

I’m tough and I can handle it. My hope is that we as a country don’t have to resort to this nonsense over political differences. https://t.co/Oxe50Mg7mY

And got a pat on the back from the president:

Everybody is with Tomi Lahren, a truly outstanding and respected young woman! @foxandfriends

Still the incident in VikingLand might come as a surprise to some Eagles fans.

Minnesotans, it would seem, should be able to treat visitors – yes, even Tomi Lahren – with the same respect and civility they demand when visiting other cities. (And, hell, there wasn't even an NFC Championship on the line.)