FOX29 reporter gets hit with snowball, Vernon Odom draws the short straw again, Steve Keeley continues to be himself 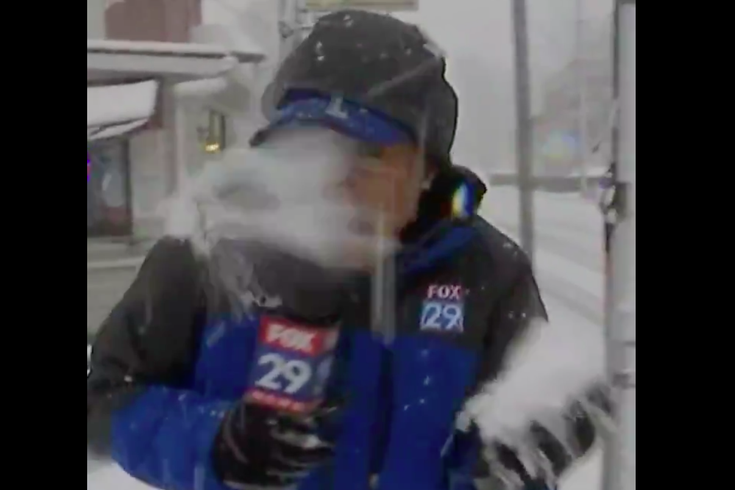 FOX29's Lauren Dawn gets hit with a snowball.

If you had off Wednesday because of the March snowstorm that hit the Philadelphia region, you could have spent your day any number of ways: binging on Netflix, catching up on some reading, alcohol consumption, etc.

What you should have blocked off time for, however, was some classic local news STORM COVERAGE, the annual ritual of reporters standing in front of a camera in poor weather conditions and informing viewers that it is, in fact, snowing.

RELATED: For Mother Nature, an early feint followed by a potent punch

In all seriousness, Philly is blessed with lots of talented television journalists who really do keep the area up to date with how bad — and sometimes dangerous — the weather is outside the comfort of our homes.

Snow coverage, however, usually produces a unique brand of comedy, especially here in Philly — from Steve Keeley becoming a meme after getting leveled by a snow plow, to residents pelting reporters with snowballs, to Vernon Odom drawing the short straw again.

Here are some highlights from Wednesday's storm:

"I think the gentleman was taking a potty"

I think this guy was just using the air pump, but maybe not. pic.twitter.com/LQPH5HlS1F

Deadspin's Dan McQuade captured this gem from FOX29's Jennaphr Frederick at a Wawa during the morning broadcast. Frederick motions the camera to point the other way when she sees a man at an air pump apparently "taking a potty." The video doesn't make clear if the guy was actually peeing or, you know, just using the air pump. I guess we'll just have to trust Frederick, who was ready to get the hell out of the cold as soon as possible.

OUCH! @LaurenDawnFOX29 thought it would be fun to have a snowball fight with some local youngsters. Little did she know, they would show no mercy! #FOX29Snow

Why is it always FOX29 reporters who seem to produce the most memorable moments? Maybe it's the Mike Jerrick effect. Anyway, Lauren Dawn decided to have a fun little snowball fight with some youngsters. One youngster was either cruel and accurate or misfired unfortunately high, landing a direct hit to Dawn's face. Oof.

Jerrick and his Good Day Philadelphia co-host, Alex Holley, just wrapped up a marathon 12 hours of storm coverage on the air. They went from 4 a.m. to 4 p.m.

No snow coverage roundup would be complete without good ol' Steve. What's going on here? Who knows. At least he's not getting plastered on the side of a highway in New Jersey by the snow and ice thrown from a plow.

Saw something we missed? Send us your snow coverage clips.