WATCH: Philly will soon be home to a full-time circus-arts school

When Circadium opens next year, Philadelphia will be the first U.S. city to offer higher education for circus artists 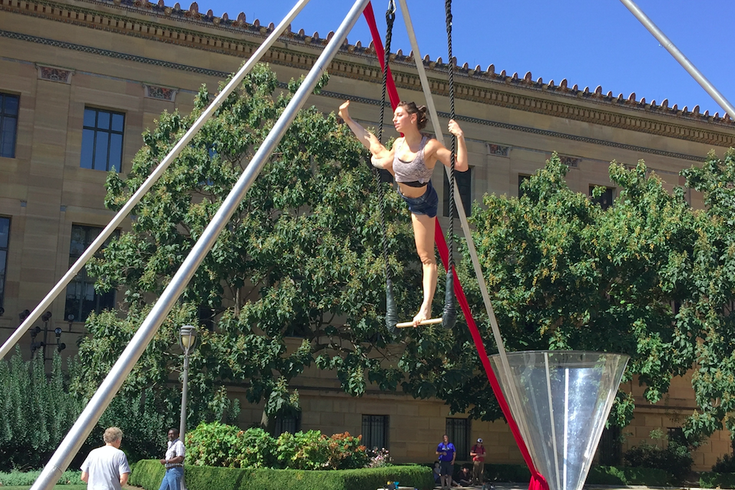 Nicole Burgio performs on the trapeze outside the Philadelphia Museum of Art as the plans for Circadium professional training school for circus artists were announced on Tuesday, Aug. 30, 2016.

Sometimes, she gets entirely lost in the music, her mind and motions, and the trapeze equipment upon which she performs. Other times, she inexplicably gets the jitters.

But on Tuesday, as she clenched onto a trapeze bar swinging eight feet above the ground outside the Philadelphia Museum of Art, Nicole Burgio gazed eastward down the Rocky Steps toward the Ben Franklin Parkway, the skyline and beyond in wonderment.

“I looked out at the city,” she said, “and couldn’t help but think about the amazing things this job is allowing me to do.”

Of course, Burgio wasn’t just randomly performing acrobatics outside the museum as her fellow performers showed off tricks with balls and juggled cones.

She was the final performer at a press conference held to announce the launch of Circadium: School of Contemporary Circus, a full-time, three-year professional training school for circus artists, by the eight-year-old Philadelphia School of Circus Arts.

When Circadium gets up and twirling next September, its organizers say Philadelphia will be the first U.S. city to have an educational facility for budding circus artists. It was enough to draw City Councilwoman Cindy Bass to the microphone to thank the school for contributing to the revitalization of Germantown. 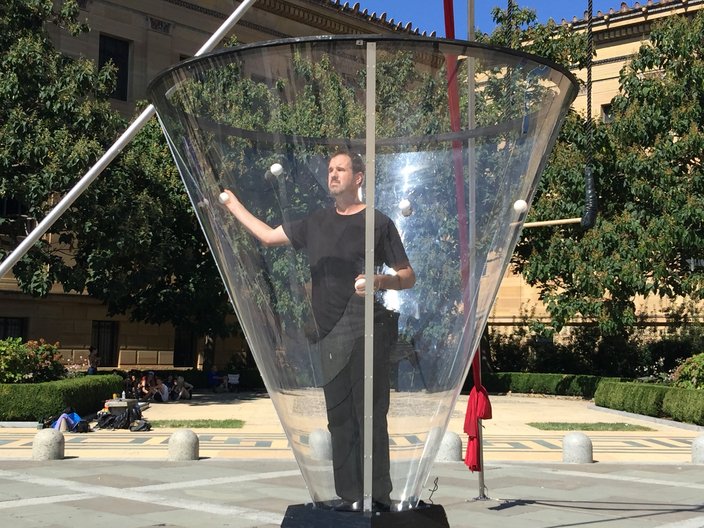 On Tuesday, they launched a Kickstarter campaign to help cover the cost of construction at a nearly secured church-property site in Germantown. Already scheduled is the online-application deadline (Nov. 30), live auditions (March 17-19, 2017) and first day of classes (Sept. 5, 2017).

The effort is being led by the School of Circus Arts executive director and co-owner Shana and Greg Kennedy, the school’s head coach Adam Woolley and Cirque Eloize’s Kryzsztof Soroczynski.

Woolley said the school would not only impact locals interested in the circus arts, but help further re-establish “the American circus community on the international stage” at a time when schools scale back on physical education offerings.

“This school is a natural next step in the progression of American circus,” he said.

Burgio, a professional circus performer who has traveled the world, is a case study in how the existing circus school has helped that progression. A gymnast by the time she was three, she ended up getting a master's degree in psychology at the Philadelphia School of Osteopathic Medicine. 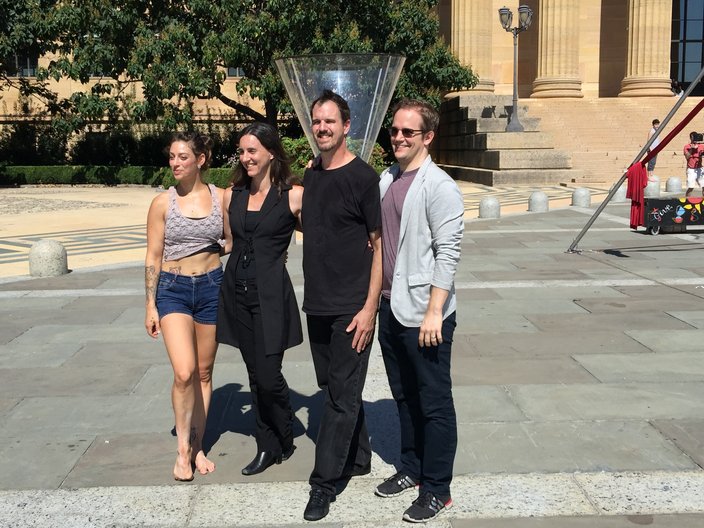 Nicole Burgio, Shana Kennedy, Greg Kennedy and Adam Woolley come together after a press conference to announce the launch of Circadium circus-arts school on Tuesday, Aug. 30, 2016.

“Then, I saw the circus come through town and thought, ‘Man, I could really do that,’” she recalled. “I felt really artless, so I went and saw the show. The ringmaster actually saw me from the audience and he said, ‘You just look so in it. You know there’s a school right in your town.’

“It happened to be a five-minute drive from my graduate school. One class led into three classes a week into me being there every day, six hours a day. And now I’m here, in a life of circus arts.”

That life led her to professional circus school in Vermont, performances in Europe, Montreal and beyond, and an upcoming four-month cruise-line stint as Marilyn Monroe on the trapeze.

She’ll also serve on the board of Circadium.

The school “will offer a more extensive curriculum.…," she said. "It will take a more educational stance of showing you how to be a true professional to push forward your career in the performing arts.”

Burgio said it’s the type of place that she thinks will appeal to people “who are not afraid to take the road less traveled, athletes, creative minds.”

And what type of person is drawn to trapeze and acrobatics as Burgio was, is and will continue to be?