Philly's soda tax could be the model for other U.S. cities

Kenney's focus on revenue, not health, could be replicated, WaPo blog says 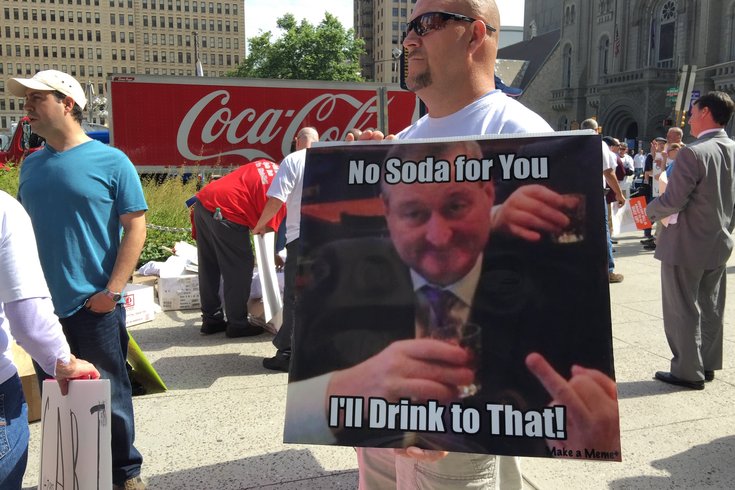 Some of the signs waved at Wednesday's soda-tax opposition rally were crass.

Philly's proposed tax on sugary beverages could serve as a model for cities across the United States.

The Washington Post's Wonkblog posted a piece about the tax – expected to be approved by City Council this week — on Tuesday. Much of the article is detailing the battle over the tax, but it also details how other cities like New York and San Francisco — which both failed to enact similar taxes after lobbying from the beverage industry — could use Philly's lead.

Specifically, it discusses how Mayor Jim Kenney's push for the 3-cents-per-ounce tax (it's now 1.5-cents-per-ounce and includes diet sodas) focused on what the revenue would go toward, as opposed to the detrimental health effects of sugary drinks, a deviation from past efforts in other cities. Per Wonkblog:

New York University professor Marion Nestle, who has authored popular books on food and soda politics, said the move by the Philadelphia City Council was a "huge deal," and likely to be replicated in cities nationwide. Oakland, Calif. and Boulder, Colo., residents will vote on taxes this fall.

“This is a fabulous way to get revenue for revenue-starved cities,” Nestle said.

The American Beverage Association (ABA) has pushed back hard against the tax, labeling it as a "grocery tax" and as regressive because low-income families are more likely to purchase sugary drinks. But Kenney's administration, as well as a group formed in support of the tax, centered their discussion on how the tax would fund things to help the city's poverty-stricken population; most notably, the launch of a universal pre-kindergarten program.

This could work elsewhere. Per Wonkblog:

While (Larry) Ceisler (spokesperson for the ABA) said the Philadelphia success was largely a result of local politics, experts say Kenney’s strategy will likely be replicated nationwide. David Just, who studies nutrition and behavior economics at Cornell University, said that a soda tax that’s used to benefit the public good, rather than wag a finger at fizzy drink-lovers, is much [more] likely to be publicly accepted.

Other advocates are comparing Philadelphia and Berkeley with those cities that began limiting cigarettes in the 1960s.

It should be noted that not all the money from the tax is going toward universal pre-K and Kenney's other passion projects, like improvements to parks and recreation centers and community schools. Some of the expected $91 million in revenue will go to Philly's general fund, a surprise to some City Council members that has sparked forthcoming hearings about the city's financial health.

But it seems as though the campaign to sell the tax worked, to a degree, and could be replicated elsewhere.

You can read the entire Wonkblog piece here, and find more information on the soda tax here.