Spoiler alert: It took a whole lot of blue makeup

By Sinead Cummings and Thom Carroll 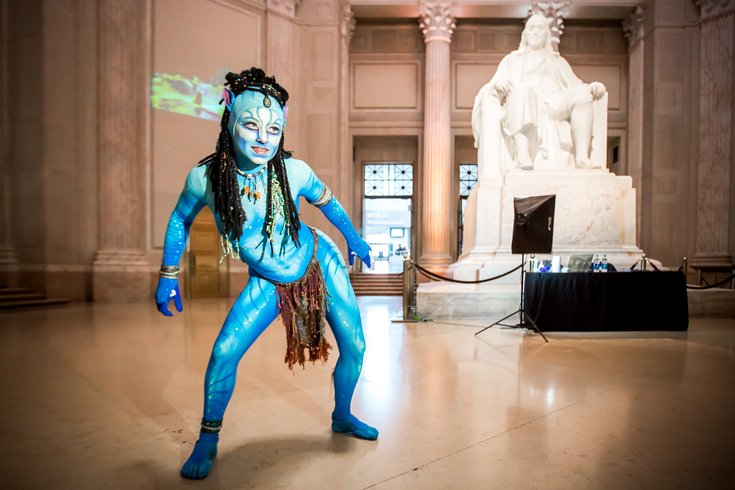 Performer Lydia Harper transformed herself into a Na'vi from Cirque du Soleil's 'TORUK - The First Flight,' a performance inspired by James Cameron's 'Avatar,' at The Franklin Institute to promote the upcoming show at the Wells Fargo Center.

To promote the new Cirque du Soleil show "TORUK - The First Flight," which is based on James Cameron’s "Avatar," visitors to The Franklin Institute on Feb. 7 were treated to a surprise.

Lydia Harper, a Cirque acrobat, applied her stage makeup in front of a crowd of children, museum guests and press. The demonstration was to show the transformation from human to Na’vi, who are the characters in "Avatar" that inhabit Pandora.

"TORUK," coming to Wells Fargo in March, is set thousands of years before the events depicted in the film. Every detail in the production was approved by Cameron.

Simply put, Harper's transformation into the other-worldly being took a whole lot of blue and about 45 minutes. 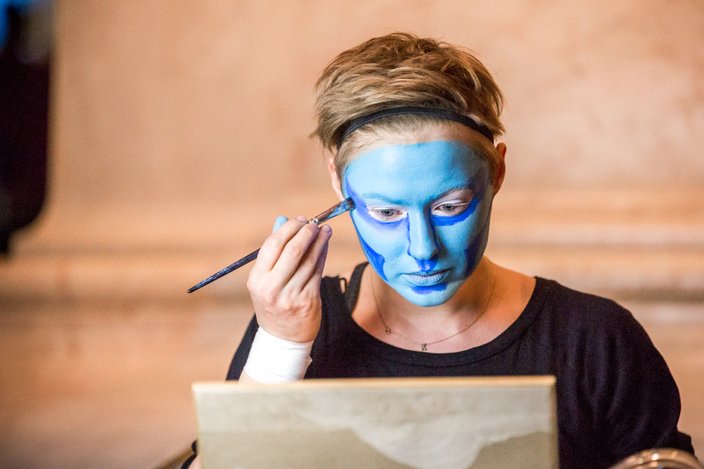 Performer Lydia Harper applies makeup at The Franklin Institute during a public event as she transforms into a Na'vi from Cirque du Soleil's 'TORUK.' 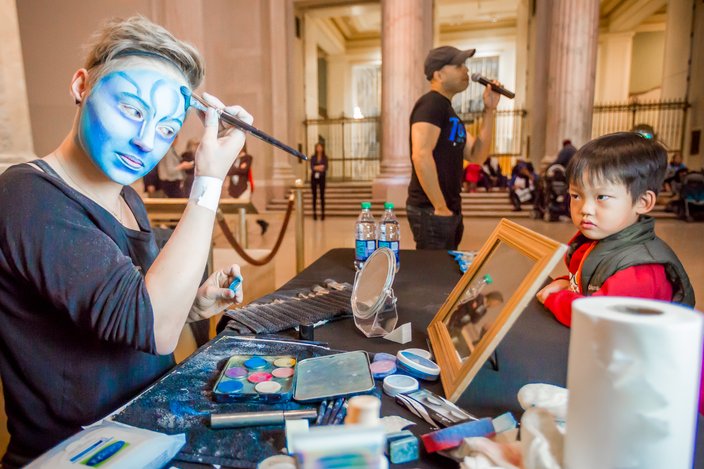 As part of the press event, Lydia Harper transformed herself into a Na'vi, while 'TORUK' cast member and professional puppeteer Rob Laqui answered questions from the audience.

Every performer in "TORUK" has to apply their own stage makeup; no professional makeup artist travels with the Cirque crew. The cast is given about two hours to put on the blue face paint before each show – and there's some pride in being able to do it in under an hour.

The performers start with a cream base for their stage makeup, then use a powder to keep the base in place through each acrobatic trick.

After the powder is on, details and highlights are added so that even the nosebleed seats can tell they're looking at a face. 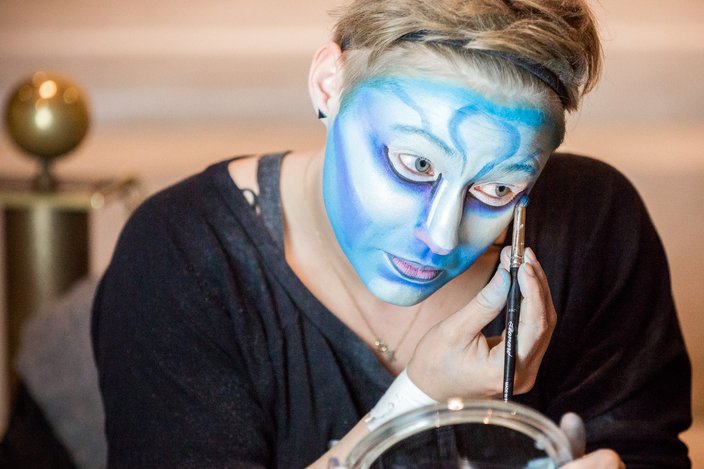 Lydia Harper transforms into a Na'vi. 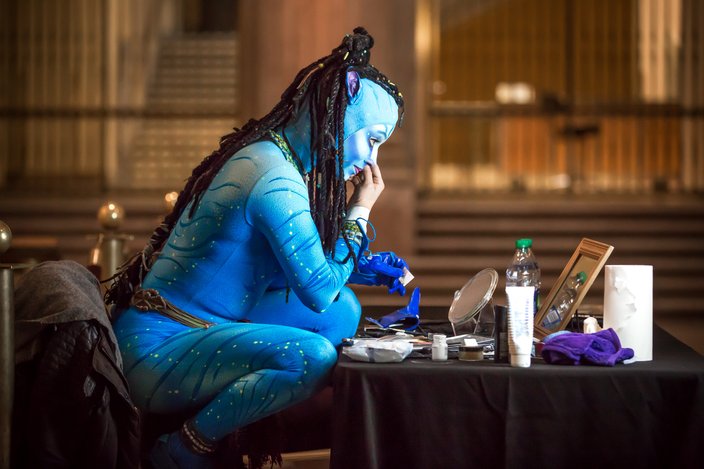 After a full body suit matching her face makeup is put on, the Na'vi is almost complete.

Once makeup is in place, it's time to put on the blue suit.

Almost all of the performers wear a basic blue suit, then interchangeable blue pieces are added to make them look different.

The performers also wear a hood that goes over the body suit and connects under their chin. Hair pieces are sewn into the hood so performers can easily change to play different parts and their hair won't fly off when they're flipping on stage. 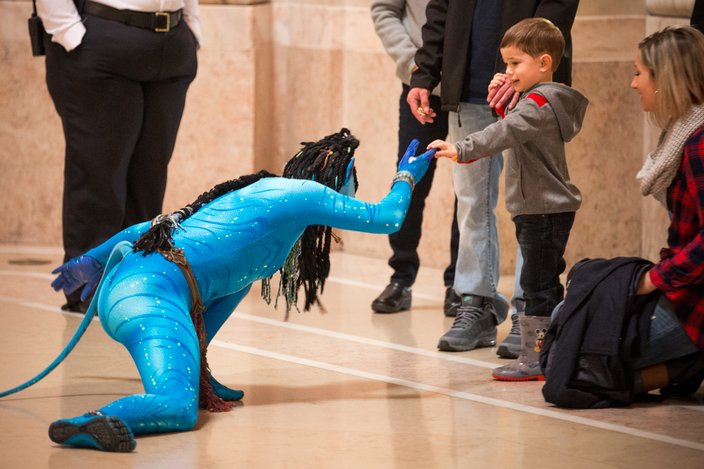 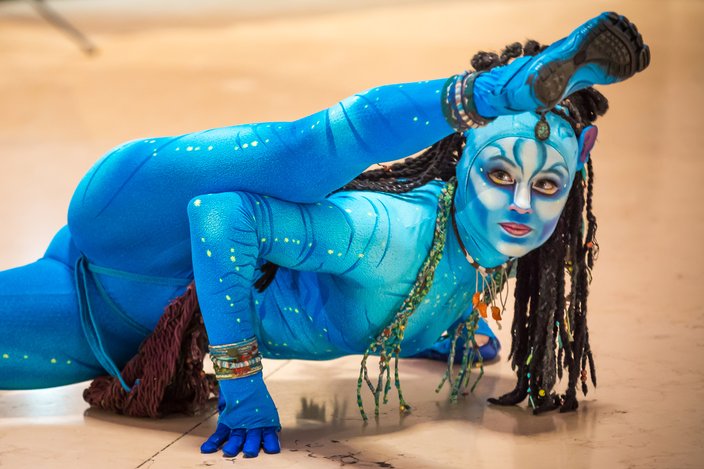 The Na'vi characters speak their own indigenous language and have an intricate way of moving and interacting with their surroundings.

Learning to do your own stage makeup might be challenging, but for many of the performers, it was having to work with a tail that required the most training.

If you remember from the movie, however, all Na’vi have tails, so there was no getting around it. 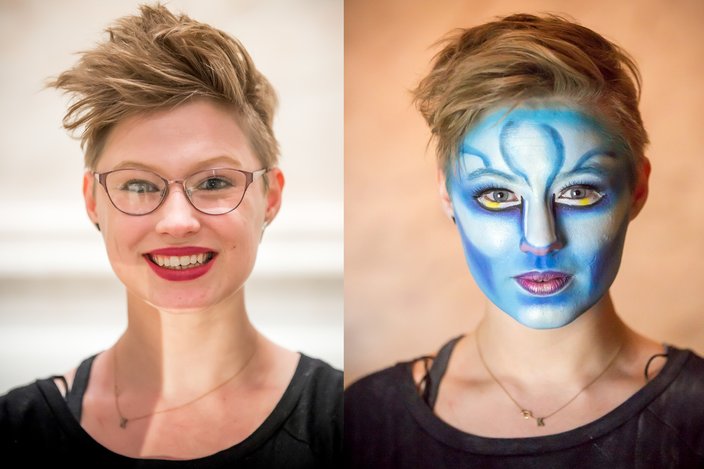 Before and after the makeup transformation process.

Besides talented acrobats, "TORUK" also features a boomerang expert, a kite specialist, puppeteers and a contortionist.

"TORUK" will be in Philly beginning March 8. Tickets are on sale.