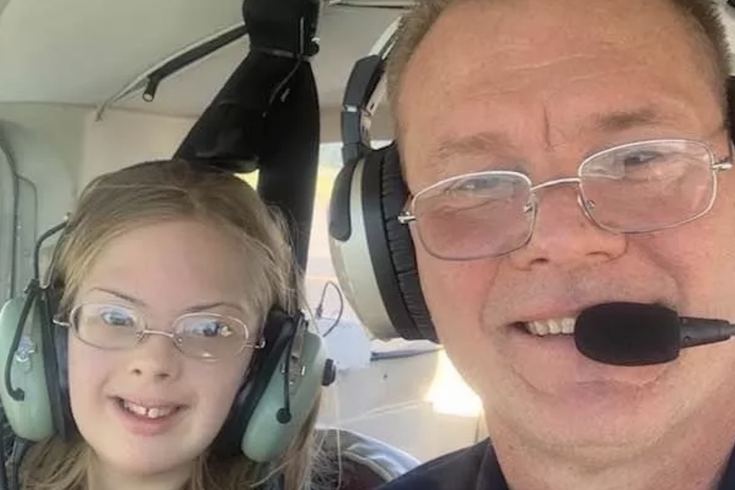 Father and daughter Chris and Angela White survived a small plane crash in Luzerne County, Pennsylvania on Nov. 13, 2021. Angela, who suffered serious injuries in the crash, underwent spinal surgery this week and may not regain functioning in her legs. Proceeds from a GoFundMe campaign will support Angela's recovery.

A Pennsylvania girl is recovering from serious injuries she suffered in a small plane crash when her father's aircraft went down in the Poconos on Sunday afternoon.

Angela White, 13, and her pilot father, Chris, 58, miraculously survived the crash in Luzerne County after their Cessna 150 rapidly descended into a wooded area. White executed the landing in such a way that the wings were sheered off, but the cockpit and fuselage remained intact.

The father and daughter were the only occupants of the aircraft and were located by rescue crews thanks to Chris's iPad, which had a flight plan for the afternoon stored on it and enabled authorities to ping their location. They had taken off from Wilkes-Barre Scranton International Airport and were on their way to Pocono Mountains Municipal Airport when the plane disappeared from radar.

Pennsylvania State Police located the aircraft after a search that lasted hours. Chris and Angela were found huddled together on a nearby trail and both were "pre-hypothermic" in 37 degree weather, said Angela White, Chris's wife and Sharon's mother.

White shared an account of the harrowing afternoon at CaringBridge.org and provided an update on Angela and Chris's medical conditions.

"Ten minutes before arrival to the ER, it was discovered that Angela was no longer able to move her legs," White said. "She underwent a thorough evaluation and was found to have a skull fracture, small amount of bleeding on the brain, an aortic injury with right sided hemothorax, T12 vertebral compression fracture with compression of the spinal cord, and chemical versus thermal burns to her left posterior thigh and both lower legs."

Chris White suffered multiple fractures and a concussion, but no apparent life-threatening injuries.

Angela, who has Down syndrome, was flown to Geisinger Medical Center to undergo spinal surgery on Tuesday. White said her daughter's operation went well, but it remains unclear whether she will be able to use her legs again.

Relatives of the Whites in South Carolina have launched a GoFundMe campaign to raise money for Angela's medical care as she continues to recover from her injuries.

"She will require ongoing therapy/rehab, and we are hoping that she is able to regain the ability to walk and use her legs," wrote Andy Thompson, Angela's cousin. "Please consider donating, as her father, Chris, is also hospitalized with multiple painful but not life-threatening injuries that will likely keep him out of work for some time."

In her latest update at CaringBridge.org, Sharon White said she and her family will lean on their faith as Angela's recovery continues.