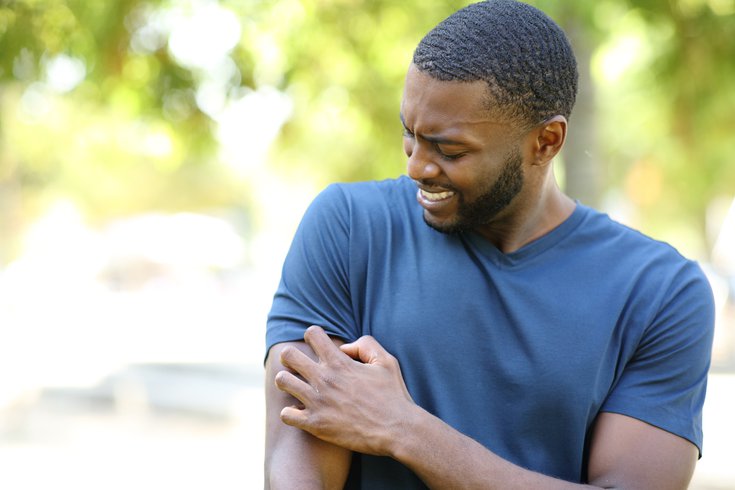 Psoriasis treatments have been a staple of TV advertising for nearly 50 years. That’s because the skin disease is relatively widespread throughout the United States.

Roughly 80 to 90 percent of psoriasis patients have a form of the disease called plaque psoriasis. Here’s a look at what it is and how it can be treated.

Plaque psoriasis is the result of an immune disorder in which T-cells attack skin cells, causing the body to make new skin cells more often than normal. This overproduction results in the skin cells building up in thick, scaly patches called plaques that may be itchy and painful.

Plaques usually appear on white people as raised red patches covered with a silvery white buildup of dead skin cells. On people of color, they may be darker and thicker, and either dark brown or a purple or grayish color.

Plaques most frequently appear on the scalp, knees, elbows, and torso. They typically appear symmetrically, affecting the same areas of the body on the right and left sides.

Psoriasis tends to run in families and is not contagious. People are more likely to be afflicted if they drink or smoke, are obese, or experience stress or depression.

Most people who get psoriasis have it for life. Although they can’t be cured, they can manage it and treat its symptoms.

The exact causes of psoriasis outbreaks aren’t known. Possible triggers may include dry skin or skin injuries, such as cuts or bad sunburn; certain foods or drinks; tobacco and alcohol; some medications, including lithium, prednisone, and hydroxychloroquine; infections, such as strep throat; and emotional stress.

There are four types of treatments for psoriasis.

Topicals are treatments applied to the skin, whether prescription or over-the-counter.

There are many varieties of over-the-counter topicals, including lotions, foams, tars, bath solutions, and shampoos. Many contain salicylic acid and coal tar, which have been approved by the Food and Drug Administration (FDA) for psoriasis treatment. Other ingredients in over-the-counter topicals include aloe vera, jojoba, zinc pyrithione, and capsaicin, which can moisturize and soothe the skin, remove the top part of the plaque, and relieve itching.

Also known as light therapy, phototherapy is typically prescribed by a dermatologist and involves exposing the skin to ultraviolet light on a regular basis under medical supervision.

Complementary and integrative treatments are those that traditionally haven't been part of conventional medicine. They may be helpful in addition to conventional treatments, but should always be discussed with your doctor.

Plaque psoriasis is a pain for many reasons. It’s incurable; it can be painful and/or itchy, as well as unpleasant to look at; and it can lead to other health problems. Fortunately, there are treatments available to help you manage the condition. And some of the steps you can take to reduce or control outbreaks — like eating healthy, maintaining an active lifestyle, and reducing stress — are also good for your overall health.