Pokemon Go: The best walking tour of Philly no one asked for 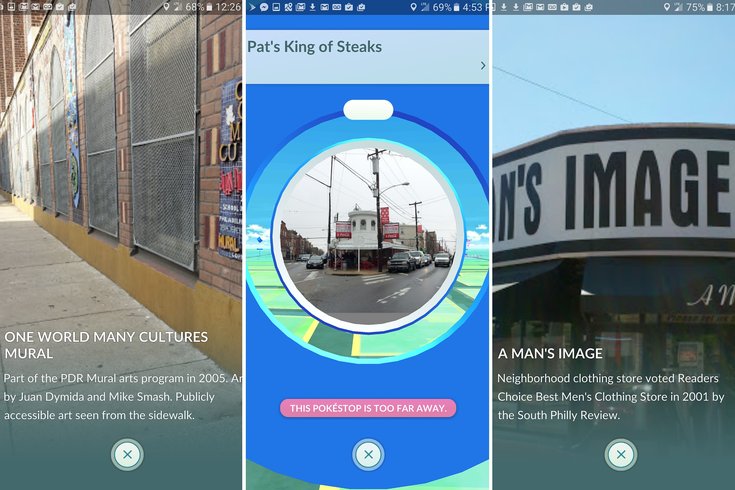 Landmarks, or 'PokeStops,' in Pokemon Go.

In case you haven't noticed already (and you'd have to live under a Regirock not to have), "Pokemon Go" became a pop-culture phenomenon the minute it debuted this weekend. Beyond its social media dominance, the location-based, augmented reality Pokemon app quickly leapfrogged every other free game in the Google Play store and Apple's App Store and thus caused Nintendo's profits to surge after a rough year.

Catching Pokemon is great and all, but the real side-delight here is that "Pokemon Go" makes for a great if unintended tourism tool for the city of Philadelphia.

While maddening the Saturday foot traffic behind me as I stopped to catch a Bulbasaur on East Passyunk Avenue, I was fascinated to see, highlighted in those blue circles dubbed "PokeStops," so many landmarks spotlighted that I'd never paid much mind to on my own. First, with a painted squirrel that I'm not quite sure how Nintendo's algorithm picked up on, then with a synopsis of the Moyamensing Prison historical landmark I'd somehow been blind to, and again as I made my trek home and cocked my head at the One World Many Cultures mural at the G.W. Childs Elementary School.

If you're a non-Pokemon fan who didn't know any better, you'd think this is a virtual tour of the city and not a video game.

And considering most PokeStops I've encountered have been churches or murals, I'd say the city's clergy and Philadelphia Mural Arts Program should look at Nintendo's latest offering with glee. Or, if nothing else, as an example of how to tour the city for newbies in a 21st-century fashion — to make Philadelphia's offerings more accessible. It's a wonder, almost, that the Mural Arts Program, in particular, hasn't already come up with a phone-friendly walking tour of the city's murals. (Hey, Philly techies, anyone want to volunteer to make that happen?) 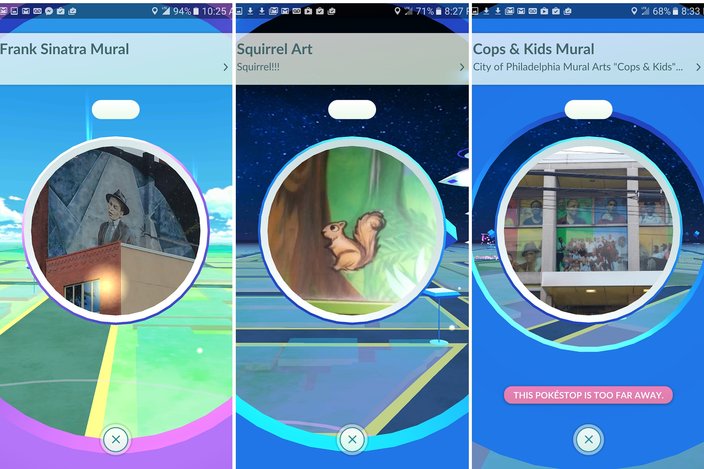 The Frank Sinatra Mural, 'squirrel art' and the Cops & Kids Mural, all PokeStops in 'Pokemon Go.'

Granted, "Pokemon Go" also highlights how virtual tours like these can go horribly wrong — to be sure, there are some hilarious omissions and errors in some of the stops that shouldn't go ignored. For example, A Man's Image on East Passyunk is hardly a men's fashion staple anymore (though it may soon be a wino's staple), and the decision to make Geno's Steaks a Pokemon Gym and Pat's King of Steaks just a plain ol' PokeStop is ... interesting. (This is America, Pikachu. Speak English.)

But here's the point: No one should be under any illusion that the "Pokemon Go" hype train won't hit the brakes in a few short weeks. So, in your search for meaning behind why you're stopping in the middle of traffic to catch your ninth Pidgey, consider how it's made you look twice at your environment — gems that maybe you, like me, walk by every day but don't really absorb in the way you should.

Think of this as a reminder to stop and look up as you look down to catch 'em all.