Beginning next year, crisis navigators will help 911 dispatchers identify whether a situation requires police, behavioral health personnel or both 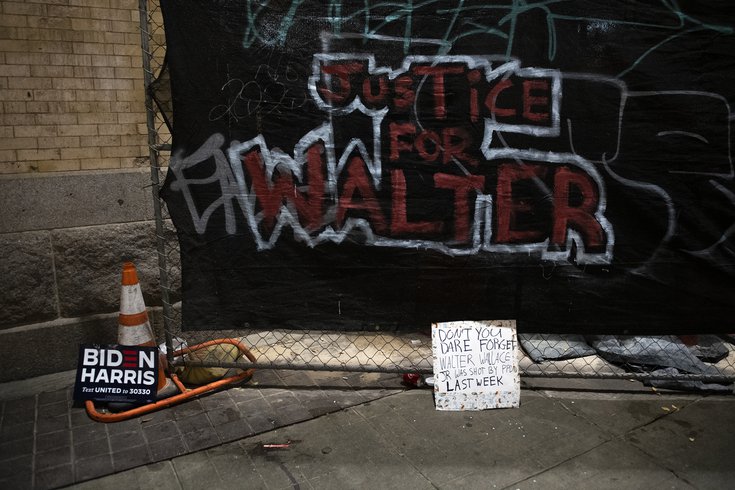 A call for justice for Walter Wallace Jr. appears outside the Pennsylvania Convention Center in Philadelphia, Nov. 6, 2020. Wallace was shot and killed by police while experiencing a mental health emergency.

Walter Wallace Jr. was shot and killed by police in his West Philadelphia neighborhood one year ago, setting off a series of protests by residents and a larger conversation about incorporating mental health professionals into crisis response.

Following Wallace's shooting, the city erupted in protest against police brutality for the second time in 2020. Just months before, the police killing of George Floyd in Minneapolis had sparked demonstrations in cities across the United States.

The protests prompted by Wallace's death renewed calls for public officials to reevaluate policies and procedures related to policing and mental health.Wallace was shot by police after he wielded a knife on a West Philly street. His family had called 911 seeking a mental health intervention. The responding officers, who did not have stun guns, fired at least 14 shots at him when he did not follow orders to drop the weapon.

On Tuesday, the city's Office of Policy and Strategic Initiatives for Criminal Justice and Public Safety acknowledged the anniversary of Wallace's killing in a joint statement with the Philadelphia Police Department and the Department of Behavioral Health and Intellectual disAbility Services.

"Mr. Wallace Jr.'s death, along with last year's protests, underscored the urgency of many important reforms such as mental health training and crisis response resources," the statement said. "Over the past year, the city has worked together with institutions, departments, community leaders and organizations to enact meaningful reforms, reimagine public safety and advance racial justice – and this critical work continues."

In the summer of 2020, the city created the Pathways to Reform, Transformation and Reconciliation as a method of addressing systemic racism in policing and access to care, among other major issues faced by communities of color in Philadelphia. The task force aims to make direct changes to city policies, fostering a more equitable justice system and improving public safety.

In its first report, released in June, the task force highlighted efforts to improve crisis intervention – more police personnel are trained in crisis intervention and implicit bias – and the need for a Police Oversight Commission, an independent board to review of civilian complaints and use of force incidents. Applications to join the commission close Nov. 5.

The city decreased police funding by $33 million last year in response to public calls for reform. Those cuts led to the loss of 195 uniformed positions, according to the task force's report, but the budget also included funding to expand the department's body camera program, provide implicit bias training and support the Police Oversight Commission.

The latest budget, approved by City Council in June, increased police funding by about $2 million, bringing the police budget to $729 million. The budget included allocations for the Community Crisis Intervention Program and Group Violence Intervention, programs that aim to prevent gun violence. It also included $1.9 million for the Police Oversight Commission.

The city's statement also noted improvements made to 911 call operations. New crisis navigators were added to help dispatchers determine whether a caller is experiencing a mental health crisis. Beginning next year, the crisis navigators will help dispatchers speak with people in crisis, de-escalate situations over the phone and identify whether the response requires behavioral health personnel, police or both.

Other related initiatives have included providing dispatchers with behavioral screening questions to utilize and an updated Crisis Intervention Team curriculum. Efforts have been made to increase non-police responses through Community Mobile Crisis Response Services.

The city also has increased funding to purchase new tasers for all uniformed police officers. Officers are able to receive a taser after only eight hours of Crisis Intervention Training, rather than the previously agreed-upon 40 hour CIT program. This allows officers an "expedited use of tasers" in an effort to address issues related to the lack of a stun gun in the Wallace shooting.

The city included various reform-based revisions in its latest contract with the Fraternal Order of Police. They included increasing the amount of time a disciplinary action remains on an officer's record, increases in penalties for police-related offenses, and prohibiting officers from maintaining relationships with members of hate groups.

"While the reforms and updated policies are a significant step forward, the city remains committed to ensuring that all Philadelphians have the safety and supports they deserve," the city's statement said. "We know we have a long way to go to making our city the best, fairest and most equitable that it can be."

The city's statement Tuesday emphasized the mental health resources available to residents, including the "Boost Your Mood" resource guide from Healthy Minds Philly, which includes tips for people experiencing stress linked to racially-motivated incidents of violence and trauma associated with gun violence.

A community resilience and trauma guide addresses the sadness, fear and anxiety that violent incidents create. The city also urged people experiencing a mental health emergency to call its crisis hotline at (215) 685-6440. It is available 24/7.

The statement noted the city's Black Male Resource Finder, a digital tool for people looking for health, education and housing-related assistance, among other areas. It includes access to local community organizations and city-run organizations as part of an effort to bridge the racial gap in access to care.