Indiana congressman doubles down on transphobic tweet about Rachel Levine 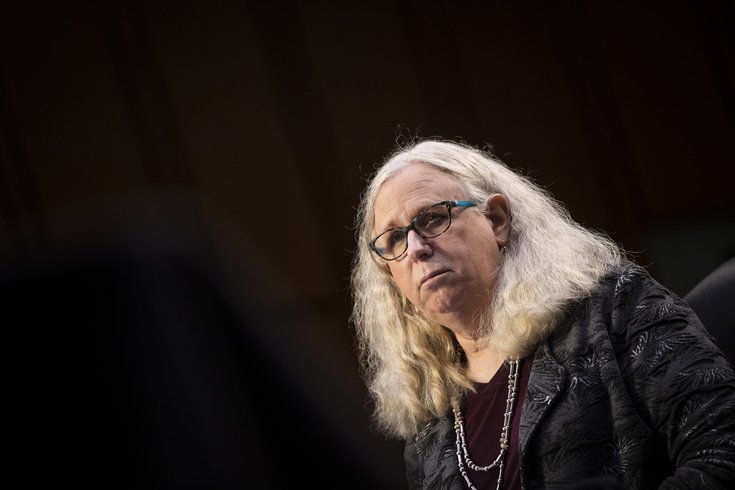 Dr. Rachel Levine has been the recipient of transphobic remarks throughout her career in public service, including during her time as Pennsylvania's health secretary.

Indiana Rep. Jim Banks is refusing to back down from transphobic remarks he tweeted last week after Dr. Rachel Levine was sworn in as the first openly transgender four-star admiral in the U.S. uniformed services.

The Republican congressman tweeted that "The title of first female four-star officer gets taken by a man" after Levine, the U.S. assistant secretary for health, was promoted to the U.S. Public Health Service Commissioned Corps.

Big Tech wants to control everything about us.

Not just the speech we put ON these platforms, but what we want to buy, believe and say OFF their platforms.

I tweeted out a factual statement and Twitter responded by silencing me. And Twitter is preventing millions of other...

Banks represents Indiana's Third Congressional District, which covers the northeastern part of the state. He is a military veteran who currently serves in the U.S. Navy Reserve as a Supply Corps officer.

Levine, 63, frequently has been subjected to transphobic remarks during her public service career. As Pennsylvania's health secretary, Levine was the target of transphobic attacks by a state legislator, a reporter, a Trump presidential campaign adviser and the Bloomsburg Fair. She was vigorously defended by Gov. Tom Wolf, who called on state residents to stand up against transphobia.

The Commissioned Corps is a force of 6,000 uniformed officers who respond to health crises and national disasters. Led by the U.S. Surgeon General, it is one of eight uniformed services in the United States.

It is separate from the military branches but plays a critical role in responding to crises, just like the National Oceanic and Atmospheric Administration Commissioned Officer Corps.

The group also works with medically-underserved populations, including Native Americans and Alaska Natives, and has had a growing role in shaping national policy around mental health.

Levine was confirmed to her post as assistant secretary for health earlier this year, becoming the highest-ranking openly transgender federal official in U.S. history.