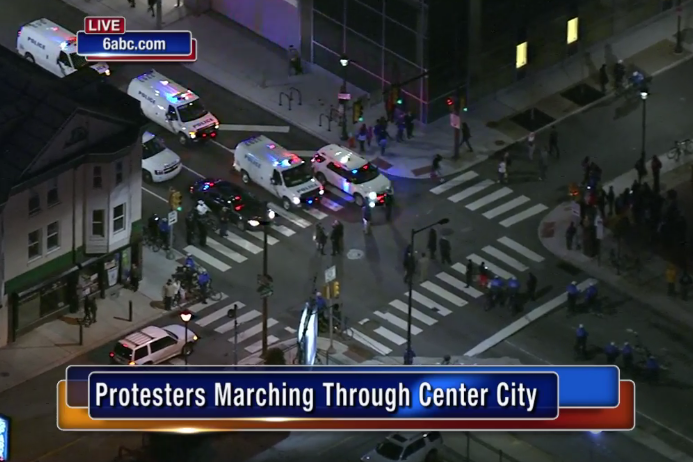 A screenshot from 6ABC shows protesters marching through Center City on the anniversary of the death of Brandon Tate-Brown.

On the anniversary of the fatal shooting of 26-year-old Brandon Tate-Brown at the hands of Philadelphia police, protesters marched through Center City on Tuesday calling for accountability from law enforcement and the justice systems.

The rally began around 4 p.m. as protesters marched to City Hall, according to NBC Philadelphia, before moving their way through Center City and stopping at several locations to voice their message.

The officers involved in Tate-Brown's death were cleared of wrongdoing in June by Philadelphia District Attorney Seth Williams, despite Commissioner Charles Ramsey admitting the original story from officers about Tate-Brown reaching for a gun were false.

The officers said after the Dec. 14, 2014 incident that Tate-Brown was reaching into his car when Officer Nicholas Carrelli fired, hitting him in the back of the head.

The shooting arose from a traffic stop on Frankford Avenue in Mayfair, which led to a struggle with police. Responding officers said Tate-Brown ignored their commands to exit the vehicle after spotting a gun.

That story had since been changed by police, as authorities eventually said Tate-Brown was actually running around to the back of his car when Carelli fired. The officer said he believed Tate-Brown was running to grab a semi-automatic pistol that was discovered inside with his DNA on it.

Williams decided against reopening the case. Shortly after that decision, Ramsey admitted there was "no evidence" that Tate-Brown was reaching for a gun.

That decision and admission stoked the anger, in part, behind Tuesday's protest, which ranged from calls for justice to some shouting "f*** the police," according to news reports and social media.

Activists have now taken over the Apple Store. #BrandonTateBrown pic.twitter.com/en2vztMROf

Some marchers utilitized the slogan "hands up, don't shoot," a reference to the death of Michael Brown, an African American man who died at the hands of a white police officer in Ferguson, Missouri, in 2014.

The claim that Brown put his hands up in surrender before being shot was refuted in a Department of Justice report.

Some videos showed protesters using profanity toward officers, including calling them "f***ing pigs, as seen in the video below (Disclaimer: video contains explicit language):

Some protesters, however, were more focused on putting forth their message of reform, according to SEPTA Police Chief Thomas Nestel, who live-tweeted the event. He said on Twitter he spoke to Tate-Brown's father.

People walking by me thanking police saying they're on our side. It isn't about sides. Marchers legitimately concerned. We protect rights TY

Just talked with Brandon Tate Brown's Dad. Great guy. He's up for my idea of going in a food place.

The lawsuit contends police mishandled information in the case. For example, it cites surveillance footage of the officers placing the gun in the car on top of the car which, the suit alleges, was coated with Tate-Brown's DNA.

According to a story on Philly.com Tuesday, she has spent the last year trying to get information on her son's death and has fought urges to give up:

"Two months ago, I said I need a break," she said. "I wonder - did you grieve Brandon the way you were supposed to? But I can't stop even if I wanted to now."

The article notes that Tate-Brown's case did not receive the same national attention as other cases of black men being shot by police. Yet Tuesday's protests show, at least in Philadelphia, the case has hardly been forgotten.