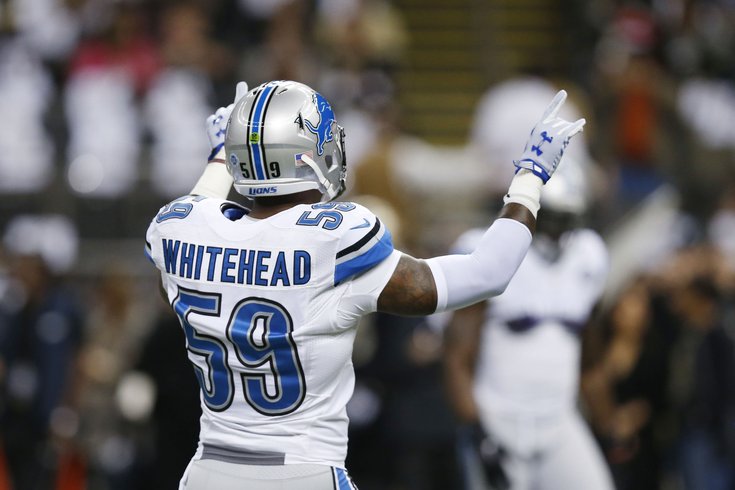 Lions LB Tahir Whitehead would make sense as a replacement for Kiko Alonso.

DeMarco Murray is gone. So is Byron Maxwell. Kiko Alonso. Moe Greene. And other Chip Kelly acquisitions of a year ago are likely to follow. Monday, in a purge that created a wealth of salary cap space, Howie Roseman settled family business at the NovaCare Complex.

The Eagles somehow unloaded a declining, slow, massively overpaid complainer in Murray, and actually got something in return for him. Meanwhile, they were able to dump Maxwell's contract, and threw Alonso into a deal with the Dolphins, that again, will bring back draft pick compensation. All told, the Eagles freed up approximately an additional $10 million. Details of what the Eagles will recoup in those trades are not yet known, but they aren't likely to be anything earth-shattering.

Deals involving Murray and Maxwell were unexpected by some, because it seemed unrealistic that any other teams would take on their hindering contracts. Never underestimate the stupidity that you can find among 31 other football teams.

And so, with those surprise trades occurring, let's take a revised look at the Eagles' standing at running back, linebacker, and cornerback.

Running back was already an underrated need for the Eagles, as the RB cupboard was likely to be bare in 2017. However, with Murray, Ryan Mathews, and Darren Sproles in place for the 2016 season, it made far more sense for the Eagles to address that position in the draft than in free agency.

With Murray gone, the Eagles only have an injury-prone Ryan Mathews, and a non-traditional back in Darren Sproles left. (And Kenjon Barner if you want to count him). Interestingly, the Eagles also reportedly put Mathews on the trading block along with Murray.

It seems like the Eagles are now an extremely good bet to draft a running back, and they might even look to add a frugal option in free agency.

One low-cost player who might make sense is the Jets' Bilal Powell. If Doug Pederson's offense is anything like Andy Reid's, he'll want his running back to be a weapon in the passing game. A season ago, Powell carried the ball 70 for 313 yards (a 4.5 YPC average), and hauled in 47 passes for 388 yards.

An even lower cost option could be old friend Chris Polk, who also showed he could be an effective receiver out of the backfield in his time in Philly. Roseman brought Polk in as an undrafted free agent in 2012.

Here are five running backs who could be of interest to the Eagles in the 2016 NFL draft.

There was always a feeling here that Alonso was far from safe in Philly, and that he could be dealt. The player we identified as a logical replacement in free agency was Lions linebacker Tahir Whitehead, who played for Jim Schwartz in Detroit and went to college at Temple. He would make sense as an option for the Eagles at SAM, with Jordan Hicks at the MIKE spot, and Mychal Kendricks at WILL.

Whitehead did not start at the beginning of the 2015 season, but the Lions inserted him in as a starter in their ninth game. In the eight games he started last season, Whitehead had 37 tackles, 2 sacks, 5 pass breakups and an interception. He'll turn 26 in April.

Here are five linebackers who could make sense for the Eagles in the draft.

With Maxwell gone, that improves the likelihood of Nolan Carroll returning to Philly next season. Carroll played well before being lost for the season with an ankle injury against the Lions on Thanksgiving. It would also seem that the Eagles would likely leave second-year player Eric Rowe at corner, as they should, rather than move him to safety.

Walter Thurmond now also becomes a player to watch. It was thought that the Eagles would let Thurmond walk in free agency, but they could opt to try to bring him back as a "corner with safety experience," but not necessarily as a starting safety.

Another corner linked to the Eagles was the Chargers' Patrick Robinson, who was a former first-round pick of the Saints.

We'll dive more into Robinson's career if anything materializes there.

Here are five cornerbacks who could make sense for the Eagles in the draft.