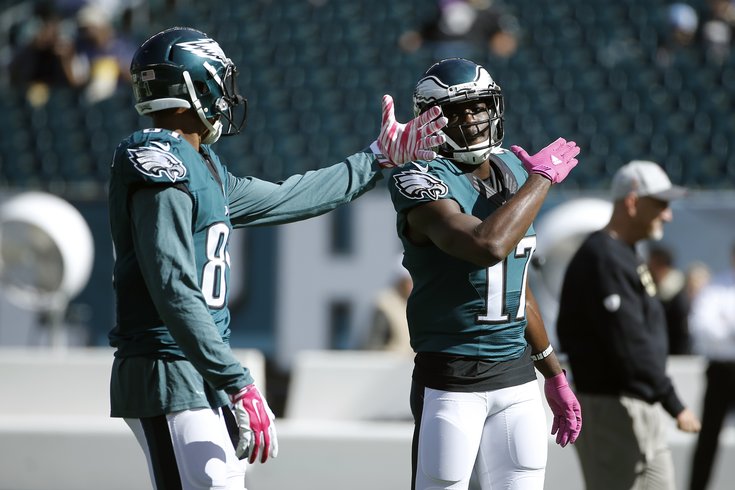 The Eagles have intriguing young players at receiver, but are sorely lacking depth.

A season ago, the Eagles led the NFL in dropped passes. Has anyone mentioned that yet this offseason? Anyway, obviously, the Eagles' receivers were disappointments in 2015. That's a kind way of putting it, really.

Over the last two offseasons, the Eagles have invested heavily in wide receiver talent in the draft:

Jordan Matthews fell a few yards short of 1,000 receiving yards in 2015, but he struggled with drops. Nelson Agholor was projected by some to be an Offensive Rookie of the Year candidate before the season began, but he only managed to catch 23 passes for 283 yards and one touchdown, falling far short of preseason expectations. And finally, Josh Huff did not progress in year two like many hoped he might.

Meanwhile, the veteran receivers stunk. The team released Riley Cooper and Miles Austin, who both did little more than eat up cap space and roster spots, and Seyi Ajirotutu is slated to become an unrestricted free agent.

Heading into the 2016 season, the Eagles' depth at wide receiver will look like this when the new league year begins on March 9:

At a minimum, the Eagles will need to add depth. Speaking to reporters at the NovaCare Complex last Thursday, Doug Pederson was asked about his young wide receivers. Unprompted, he noted during his answer that the Eagles will be shopping for receivers in free agency.

"They’re young, they’re talented," said Pederson. "I think they have a good rapport with Sam. I think he’ll be able to work with them. I think that’s very important. I still think you have to create depth at that spot, at that position. We’ll look into free agency there, and then obviously the draft. But I think it’s a good, talented, young group of receivers."