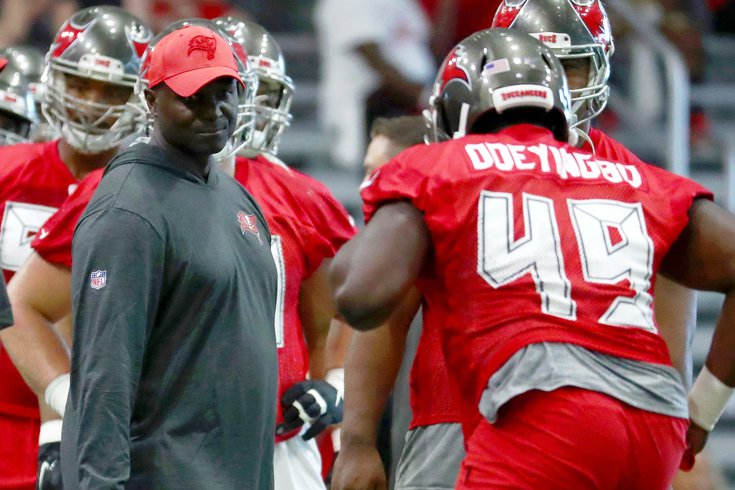 The Philadelphia Eagles have requested to interview Tampa Bay Buccaneers defensive coordinator Todd Bowles for their vacant head coaching job, according to a report from Sal Paolantonio of ESPN (via Adam Schefter, because Sal Pal isn't on Twitter):

And Sal Pal says the Eagles are requesting permission to interview Bucs' DC Todd Bowles as well, which would bring him back to the city in which he played college football at Temple from 1982-'85. https://t.co/C6MsJWJB9q

As a coach, he was with the Eagles for one season, and even served as their defensive coordinator to close out the disastrous 2012 season after the team fired Juan Castillo. His coaching history (via Wikipedia):

Bowles got a head coaching gig with the Jets, which lasted four years, and did not go well. The Jets actually went 10-6 under Bowles in 2015 with Fitzpatrick at quarterback in his first season there. However, he ultimately compiled a 24-40 record with the Jets, winning just 14 games over his last three years. In fairness, in addition to Fitzpatrick, his quarterbacks were Josh McCown, Bryce Petty, and rookie year Sam Darnold.

As a defensive coordinator, Bowles has gotten good results:

RELATED: What is Lurie looking for in Eagles' next head coach?

However, his Jets defenses weren't as effective when he was their head coach, with the exception of the 2015 season:

In 2020, the Buccaneers had the best run defense in the NFL. They were No. 1 in opposing rushing attempts, rushing yards, rushing TDs, and yards per rush. In that sense, his "stop the run first" style of defense is similar to the approach we have seen over the years from Jim Schwartz.

As we noted when we profiled Robert Saleh, the Eagles are unlikely to hire a defensive-minded coach, but we'll see.

MORE: WTS: Lurie (and Roseman) to blame for Eagles mess, not Pederson | Shander: Pederson was Eagles' latest scapegoat, but won't be the last