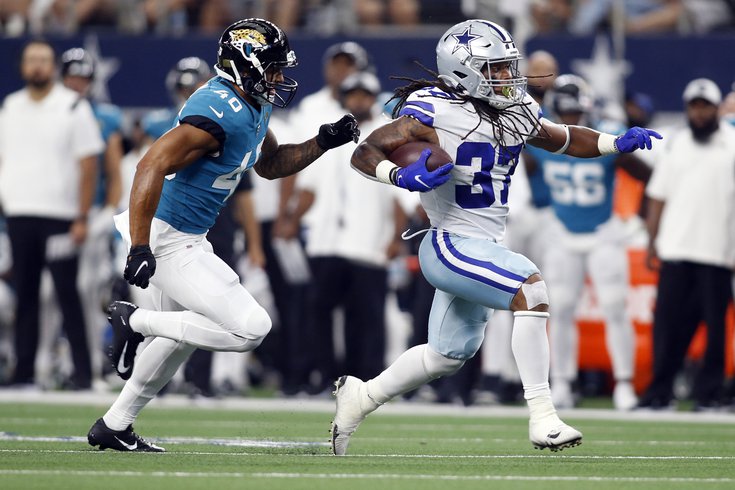 UPDATE [9:30 a.m.] — My new understanding is that JaQuan Hardy is one of several players the Eagles intend to work out on Monday but a signing of Hardy is not imminent.

The Philadelphia Eagles will be signing former Dallas Cowboys running back JaQuan Hardy, according to a report from Chris Tomasson of the St. Paul Pioneer Press.

The #Vikings, who have one roster spot open, looked into bringing in RB JaQuan Hardy for a workout but a source said he's going to sign with the Philadelphia Eagles. Hardy had four carries for 29 yards as a Dallas Cowboys rookie last season before being waived earlier this month.

The Cowboys signed Hardy as an undrafted rookie free agent in 2021 out of Tiffin University. He appeared in three games for Dallas, carrying four times for 29 yards. Three of those carries came against the Eagles Week 18 last year in a meaningless matchup mostly played by backups. He even scored on a 22-yard TD run in that game.

Here are some highlights from his college career at Tiffin:

Hardy is 5'10, 225, so he has some meat on his bones. The Eagles could use a between-the-tackles banger to compliment Miles Sanders, Kenny Gainwell and Boston Scott. Hardy's college scouting report, via Lance Zierlein of NFL.com.

Lower-level running back with upper-level change of direction talent and lower-body balance. Hardy does a nice job of pressing the line of scrimmage before unleashing rhythmic, explosive cuts according to his reads. He has a tendency to do too much at times and will need to be more willing to shut a run down and move to the next one against NFL speed. He's quicker than fast, but his elusiveness, power and contact balance are all transferable traits into the league. A meniscus injury from 2018 could be a concern for teams, but he has the pure talent to become a committee back if the medicals check out.

And via Dane Brugler of The Athletic:

JaQuan Hardy grew up in East Cleveland and attended Westlake High School where he was a three-year starter, compiling 3,164 career yards on offense. A zero-star recruit, he received FBS walk-on opportunities (Akron, Ball State), but he chose the scholarship route, committing to Division-II Tiffin (Ohio). After missing the 2018 season with a torn meniscus in his left knee, Hardy led the GMAC in rushing as a junior with 1,554 yards, putting himself on the NFL map.

An energetic ball carrier, Hardy keeps his hips and feet in sync to press the line, make quick, controlled cuts and clear congestion. While he runs physically to bounce/spin off contact, he lacks ideal size and must improve his run discipline. He flashes encouraging third-down skills but must improve his pass-pro mechanics and comfort as a receiver. Overall, Hardy faces a sizable uptick in competition, but his lateral agility and contact balance are encouraging traits that could surprise in an NFL training camp.

The Eagles had an open roster spot after releasing CB Craig James last Monday. They will now have six running backs on their roster, assuming this signing is finalized.