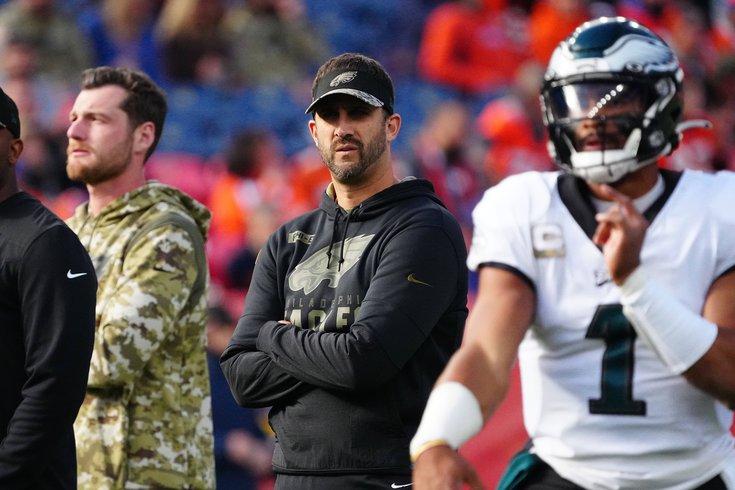 For the first time in Jalen Hurts' professional or college career, he will enter a season with the same head coach / offensive coordinator / quarterbacks coach trio that he worked with in the previous season. A look:

To take that a step further, the Eagles didn't just keep their HC/OC/QB coach trio together. They kept their entire coaching staff together.

When asked what it means, Nick Sirianni explained, "You’re just a step further than you are if you don’t have that because you’re not figuring out things. We know what Jalen likes. We know what he’s good at. We’re seeing it. So I think that’s why you’re seeing a better version of Jalen in the sense that we’re running the stuff we know he likes, and some different stuff like that. And we see a better version in that he’s getting better."

The players around Hurts will also largely be the same. Along the offensive line, Jordan Mailata, Jason Kelce, and Lane Johnson will return to their starting spots at LT, C, and RT, respectively. Landon Dickerson played both guard spots last season, but will settle in at LG this season, after gelling with Mailata on the left side during the back half of the 2021 season. And then at RG, whether the starter is Isaac Seumalo (43 career starts) or Jack Driscoll (13 career starts), both players have starting experience alongside the rest of the group. The Eagles have some of the best offensive line continuity in the NFL.

There will also be all familiar faces at the skill positions, as DeVonta Smith, Quez Watkins, Dallas Goedert, and Miles Sanders will all return to the starting lineup. The only newcomer is A.J. Brown, who just happens to be one of Hurts' closest friends and offseason workout partners.

On the downside, continuity can also sometimes lead to predictability. At the end of the 2022 season, Hurts struggled in the Eagles' two games against the Giants as well as their playoff matchup against the Buccaneers. The Buccaneers in particular had a plan that frustrated Hurts, making him stay in the pocket, or if he was going to escape, they made sure it was to his left, where he is much less comfortable.

That's Hurts 👆. Opposing teams now have a full season's worth of Hurts' tape and tendencies to figure out how to make life difficult for him, and he'll have to prove he can adjust.

Sirianni acknowledged that opposing defenses' familiarity with Hurts could be a challenge to overcome. "The other aspect of that is, ‘OK, they know we run this, this and this,'" he said. "And to an extent, teams did late in the year because they had so much film on us."