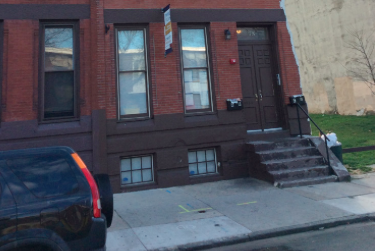 Formerly vacant property on the 1500 block of Diamond St.

The Philadelphia Housing Authority has raised $9.5 million since 2011 by auctioning off approximately 500 vacant properties scattered across the city, according to a report from researchers at the University of Pennsylvania.

The initiative to auction the properties began as an effort to return tax-delinquent properties to the city's tax rolls, according to Plan Philly, but the practice has since become a vehicle for cost-effective redevelopment in neighborhoods across North, South and West Philadelphia.

The report, "Auction Sales of PHA Scattered-Site Properties," analyzes some of the sale and ownership patterns that have emerged through the private auctions conducted in partnership with Max Spann Real Estate and Auction Company in New Jersey. Rules of the auctions require the highest bidders to develop or renovate the properties within a period of three to five years or else hand them back to the PHA.

As a result of the auctions, the PHA was able to return about $25 million of previously tax-exempt properties back to the city's tax rolls. Researchers found that the majority of auctioned properties sold for under $15,000, but more than two-thirds of those properties are now valued higher than their sale price at current market values. Approximately 70 percent of those who purchased the properties reside in Philadelphia while about 30 percent are from other parts of the region and beyond.

The results of the initial auctions are encouraging, said John Kromer, Philadelphia's former Director of Housing and an author of the report. They indicate that open auctions, such as those held last year in Kensington and South Philadelphia, represent a faster way to deal with surplus properties than requesting proposals from developers. It also allows the city to identify smaller developers who can quickly rehab vacant and blighted properties for productive use.

In recent years, the PHA has taken this approach to fix up hundreds of scattered properties in neighborhoods including Point Breeze, Fairmount, Francisville, Brewerytown and Center City. Those efforts are in stark contrast to PHA's plans for 1,300 properties it seized last year in Sharswood. The PHA aims to knock down the Blumberg apartments to construct 1,200 units of primarily affordable housing, a $500 million project that estimates say will cost upward of $400,000 per new unit. Critics argue some of the Sharswood properties should be auctioned off, particularly those owned by people who are up to date on taxes.

The report on the auctions was produced through a course taught in Penn's Urban Studies and City and Regional Planning departments, with the contributions from the Fels Institute of Government.