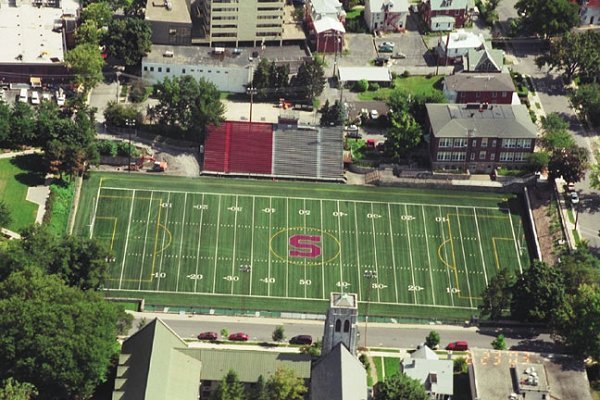 Authorities in State College took a 14-year-old boy into custody on Friday night after witnesses say he shot another teenager with an air gun during a high school football game, causing permanent damage to the victim's right eye.

The incident reportedly occurred in the vicinity of Memorial Field during State College High School's tilt against Central Dauphin High School, according to StateCollege.com.

Police said the suspect shot a 13-year-old boy in the face with an air gun, resulting in the victim's hospitalization for injuries to his eye and face.

The victim's mother told the Centre Daily Times that her son, Justin Anderson, underwent a five-hour emergency surgery to remove pellets lodged in his right eye and temple. He will be permanently without vision in his right eye.

Investigators believe the shooting was intentional and likely stemmed from a previous conflict between the teens.

A GoFundMe page to support Anderson, a youth football player, had already raised more than $11,000 by the end of the weekend.

"A football star with a bright future ahead of him will now suffer life-long consequences and hardship from this tragedy," said a statement at the crowdfunding site.

State College Area School District officials, who are assisting police in their investigation of the shooting, said they plan to take steps to address safety and security at future events.

"Right now, our focus as a district is on our students and their families and our steps to move forward to support them," SCASD superintendent Bob O'Donnell said in a statement. "This tragedy occurred despite having several police officers in close proximity. Therefore, we will collaborate with the State College police department to conduct a review of safety protocol at district events."

The juvenile suspect, who has not been identified, is charged with aggravated assault, simple assault and recklessly endangering another person. He was reportedly being held at the Central Counties Juvenile Detention Center.