No, someone didn’t crash a car into Rittenhouse Square on Tuesday

It was part of a film set, not reckless driving gone wrong 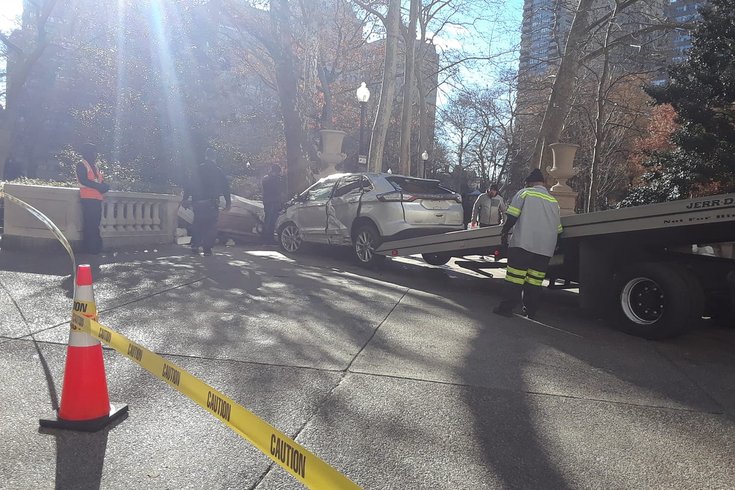 The "crash" at the corner of 18th & Walnut Streets.

Dodging cars in Center City can feel like a constant fight for survival, and a scene at Rittenhouse Square on Tuesday appeared for a moment to be proof that Philly’s drivers need to slow down.

Things looked bad for a silver SUV, and also for Rittenhouse’s famous ledges:

Someone just hit a tree in Rittenhouse and idk how you go fast enough to do that much damage in the middle of the city grid? pic.twitter.com/Wtza1YJRa9

This is a thing that apparently happened in (to?) Rittenhouse Square today. pic.twitter.com/cUj0pczkaQ

Thankfully, it wasn’t a real crash. You might notice the car doesn’t have a license plate on the back, and a fake retaining wall has been placed in front of Rittenhouse’s signature, columned ledges to make it look like a collision had taken place.

Instead, it’s part of a television show being filmed in the city. A flier made the rounds Tuesday morning, which described exactly where the “crash” took place: 18th Street, between Chestnut and Moravian Streets.

The flier says the television show is called “Crumpet” and the production company is called “Uncle George Productions, LLC”.

A search for Uncle George Productions turns up a 9-month-old production company based in Pennsylvania, but information on a television show called “Crumpet” was less available.

Considering production companies often use fake names for film sets in order to throw celebrity-chasers off the scent, it could be anything.

Social media has a few guesses:

It’s supposedly something Apple is filming

Now I'm hearing it's an M. Night Shyamalan film and Ron from Harry Potter was downstairs buying coffee in Joe's. It's definitely filming for something; we watched from above as they painstakingly maneuvered the already-smashed car into place with a flatbed truck.

We'll eventually find out who was filming there.