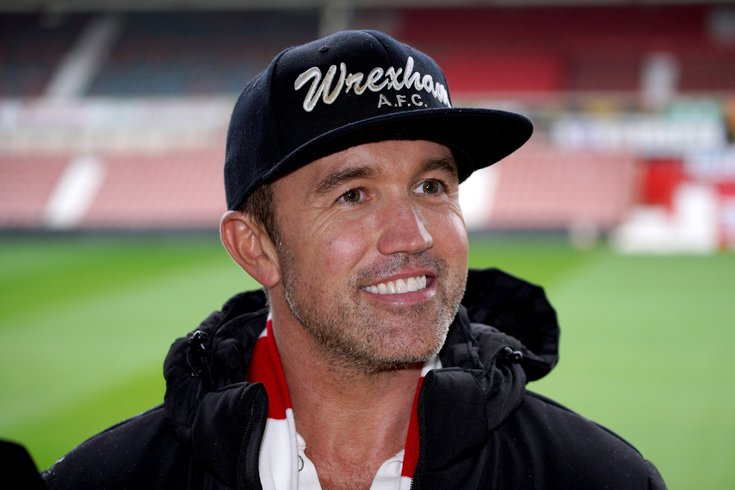 During an appearance on 'Jimmy Kimmel Live,' Rob McElhenney said that he suffered a foot injury after rolling his ankle over a step in his Southern California home during the Thanksgiving weekend.

The newest season of "It's Always Sunny in Philadelphia" is off to a strong start, but not all is well right now for Rob McElhenney.

The actor revealed Wednesday on "Jimmy Kimmel Live" that he tore a few ligaments and suffered tissue damage in his right foot during on the Saturday after Thanksgiving.

McElhenney hobbled onto the set with a very noticeable limp, a boot on his right foot and a cane in his right hand to help him walk.

Calling himself a "moron," the Philly native said he suffered the "very serious" injury in his Southern California home.

"I fell down a step, and I rolled my ankle," McElhenney told Kimmel. "I felt pain like I never felt before. I collapsed onto the ground and I was dry heaving because I was almost about ready to throw up. But I was also laughing because it was really funny. No one else was awake in the house so I was trying to hold down my screams and also my vomit."

McElhenney said he was able to stand up on his own about 15 minutes later and put a little weight on his foot. Despite pleas from his wife, "It's Always Sunny" co-star Kaitlin Olson, and his mother-in-law, McElhenney insisted that he didn't need to go to the hospital and would just shake off the injury.

However, the injury worsened and McElhenney realized he should seek out a doctor.

"So I shake it off and I go to bed that night," McElhenney said. "I wake up the next morning and my foot looks like a Christmas ham and I turn to Kaitlin and I said, 'I think I have to go to the hospital.'"

McElhenney said he initially didn't want to go to the hospital because he expected the emergency room to be busy. But when he got there, it was empty.

"I'm like, 'It's a holiday weekend. Is it always this empty?' And the nurse said, 'Don't worry, it'll be packed this afternoon and tonight.' And I was like, 'Why? Do crazy things happen on Sundays of holiday weekends?' She said, 'No, [people do crazy things] on Friday and Saturday and Saturday night and then they shake it off for a day and then they come into the hospital and an hour later it'll be packed,'" McElhenney said.

McElhenney said he doesn't know when the boot will come off, but he's trying to take a glass-half-full approach to the situation.

"[The injury's] not that bad," McElhenney said. "I get to move around. I will say [the boot] is actually fairly comfortable."

Fortunately for McElhenney, he has a number of positive things going for him right now. The 15th season of "It's Always Sunny in Philadelphia" premiered last week, making it the longest-running live-action comedy series in American television history. The sitcom is already committed for at least three more seasons.

"Honestly, we love the show and we want to keep making it and [FX] keeps paying for it," McElhenney said. "And for some reason, people keep watching it, so we keep making it."

Through four episodes, the Gang has obtained Paycheck Protection Program loans to fund three business ventures and disastrously attempted to make a "Lethal Weapon" film. The season also has explained how the Gang's efforts to buy a South Philly roller rink in 1998 led to them instead purchasing the rundown Paddy's Pub and how a bartending monkey robbed the pub after getting the gang drunk off beer and whiskey.

Now, the Gang has decided to go on a vacation to Ireland, where Dee Reynolds' budding acting career is set to take off. However, the cast didn't actually travel to Ireland due to the COVID-19 pandemic, McElhenney said.

"We had written the entire half of the season where we were gonna go," McElhenney said. "We thought we were gonna hit the right month. It turned out we hit the wrong month and it was just impossible to do it. So we had to recreate Ireland in Southern California. But then again we are recreating the city of Philadelphia in Southern California. We've done that for 14 years. It's probably good for our livers because we probably would've spent a lot of time at the pubs."

New episodes of "It's Always Sunny in Philadelphia" can be seen Wednesday nights at 10 p.m. on FXX and streamed the following day on Hulu.

McElhenney and co-stars Charlie Day and Glenn Howerton also recently started "The Always Sunny Podcast." They share behind-the-scenes stories, relive memories from the show's first 14 seasons, and tell a healthy amount of jokes. The podcast is currently ranked No. 2 on Spotify's list of the top shows in the United States.

"We had been talking about [the podcast] for a few years, but we were like maybe we just do it for promotion for the show," McElhenney said. "It'd be great to keep the word out there that this will be our 15th season. So we did this podcast and we just thought we'd put it out there and a few people would listen to it and it would be a good way to promote 'Sunny.'"

Wrexham AFC is the oldest club in Wales and third-oldest in the world. The club's home pitch, the Racecourse Ground, is the world's oldest stadium that still hosts international games. Prior to McElhenney and Reynolds taking it over, the club had been owned by fans since 2011.

McElhenney said that it was an awesome experience traveling to Wales with Reynolds to meet the team and its fans.

"It was absolutely incredible," McElhenney said. "The way that the town and the team have embraced us. It's a religious experience when you go and you walk into this field that's been there since 1802 [when] it was originally built. They've been playing football there since 1864. So these organizations are older than any professional sports we have in this country."

The Red Dragons are currently in fourth place in the National League, which is the fifth tier of the English soccer pyramid. It's the lowest tier the club has played in since it as first elected to the Football League in 1921. But McElhenney said he's hopeful the team will make a big run in the second half of the season.

A documentary detailing McElhenney and Reynolds' ownership of the club, called "Welcome to Wrexham," will premiere on FX in 2022.

McElhenney also snuck in a "Go Birds" at the end of his interview and said that people have been telling him recently how much he looks like Eagles backup quarterback Gardner Minshew. However, Olson recently handed her husband some humble pie on the matter.

"I said to Kaitlin, 'We could be brothers. We really do look alike.' And she said, 'He's a 21, 22-year-old football player. He could be your son.' And I took umbrage with that," McElhenney said.

You can watch McElhenney's entire interview with Kimmel below.