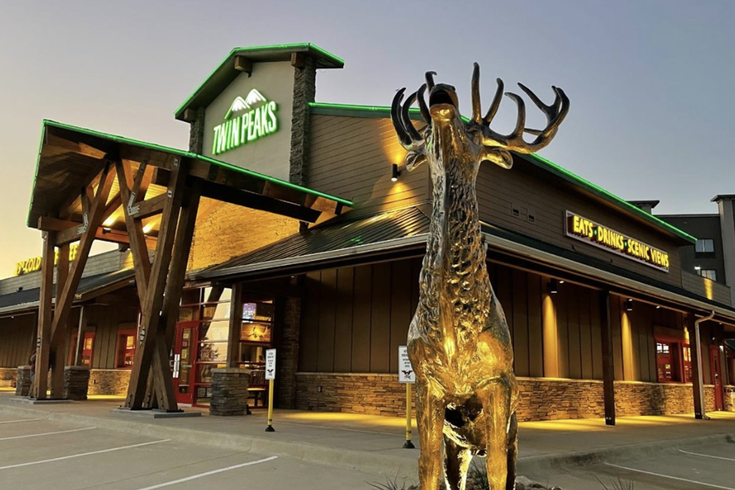 Sports bar Twin Peaks aims to start opening new locations across the Philadelphia area at the end of 2022 and into 2023 as part of its first expansion into the Northeast.

The Philadelphia region will see a wave of new sports bars in the coming years as Twin Peaks, a lodge-style restaurant with wall-to-wall TVs and an all-female waitstaff, embarks on its first expansion to the Northeast.

Known for its rugged atmosphere and savory, made-from-scratch menu, Twin Peaks was founded in the Dallas suburbs in 2005 and has expanded to include 85 locations across the country. Now, the company plans to open 10 locations in Philadelphia and the surrounding areas.

"Everything we put in our building is a high-caliber weapon of mass distraction," Twin Peaks CEO Joe Hummel said. "We want whoever comes in to see these weapons of mass distraction, and all their focus on whatever happens outside the four walls, when they come in, they're distracted because there is such great food, bar, Twin Peaks girls, sports on, sound, fire pits, fire places. We want to really distract them from whatever is going on outside the four walls, so they can kind of escape inside our place."

Twin Peaks has a combination of corporate-owned locations and franchises. The 10 restaurants planned in this area are part of a franchise development agreement.

The company and its franchisees are still in the process of choosing the upcoming locations, but have focused on a handful of potential destinations.

"We're looking toward the King of Prussia market, Springfield, Willow Grove, Oxford Valley, Bensalem. Those are some of the narrowing-down areas that we're really intrigued by," Hummel said.

The brand's footprint in Pennsylvania could include possible locations in Philadelphia, Chester, Delaware, Bucks, Montgomery, Berks, Lancaster and York counties. There also is a possibility that a suitable location springs up in South Jersey, and the company has an eye on Pittsburgh and the Ohio market as well.

At its existing locations around the U.S., Twin Peaks is perhaps best known for its frosty, 29-degree draft beers.

"Cold beer is a really great way to watch sports, but to say 'cold beer' versus execute 'cold beer' — that's two different things," Hummel said. "We partnered with a proprietary draft system guy out in California and he designs our draft systems for us that actually pour beer at 29 degrees. When it's hitting our frozen mugs, you're getting a beer slushy. It just makes watching sports and our scratch kitchen that much better."

The bar's menu features a range of burgers and sandwiches in addition to soups, salads, tacos and hot dishes like pot roast, steak, chargrilled salmon and a selection of sides.

Twin Peaks' marketing gestures toward the general lumberjack ethos, or "mantality," as the company quips in an ad.

The bar has sometimes been compared to Hooters, but Hummel said the similarity only comes from the women on the waitstaff.

"Our brand has so many dynamic parts," Hummel said. "When you look at our lodge versus any sports bar out there, we have so many  other things that can draw you to it to complement sports."

Already in the midst of significant growth, the company plans to use the Philadelphia area as a launch point to move north into New York and Massachusetts in the years ahead.

"We think Eagles fans, Phillies fans, Flyers, Philly Union, all of those sports entities are just great natural fits for our fanbase that will be out of the Philly market having a game day experience inside our lodges," Hummel said.

In the coming year, Twin Peaks aims to open between 22 and 25 new locations, and then between 30 and 35 annually in the subsequent years. The company also has its sights set on soccer fans in Mexico, where there are plans taking shape for 32 new locations in the years ahead.

In the Philadelphia area, the first of the 10 new lodges are targeted to open toward the tail end of 2022 or in early 2023.

Hummel expects that Twin Peaks will attract sports fans from across the spectrum when it arrives in the area.

"Sports resonate — and it's so many different sports," Hummel said. "Whether it's boxing, UFC, obviously the NFL and college football, college hoops, NBA, hockey, baseball. You get Champions League going on and World Cup qualifiers, which plays right into the MLS."

The company may have been born in Dallas, but Hummel says the new lodges will be a welcome atmosphere for rival Eagles fans, who will be watching scoreboards closely in the final weeks of the NFL season.

"Philly, they're hanging in there," Hummel said. "They haven't had as much success (as the Cowboys), but they're still within the hunt, especially if Washington were to beat the Cowboys this Sunday."