The 'Always Sunny' star and his Wrexham A.F.C. co-owner each recently turned 45 – the recommended age to first undergo the potentially lifesaving procedure 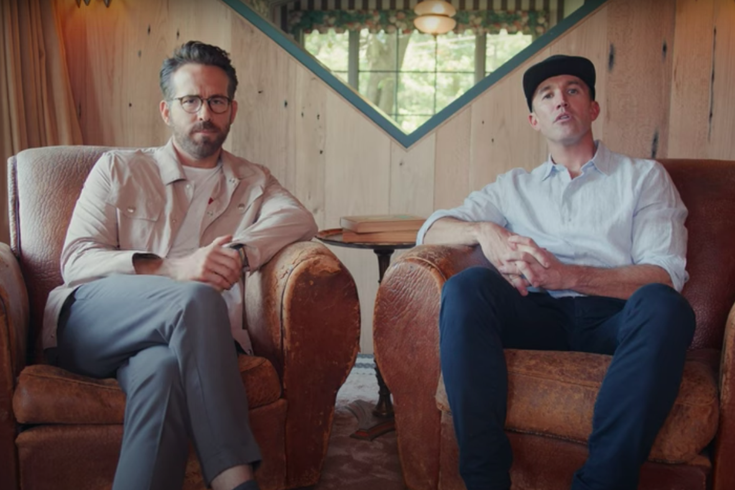 Actors Ryan Reynolds, left, and Rob McElhenney stress the importance of colonoscopies in a video for Lead From Behind, an initiative led by the nonprofit Colorectal Cancer Alliance.

Rob McElhenney and Ryan Reynolds have spent a lot of time in front of the camera, but having one inside them wasn't familiar territory.

To emphasize the importance of colorectal cancer screenings, the actors allowed themselves to be filmed getting their first colonoscopies. They each turned 45 within the last year, reaching the recommended age for most adults to begin receiving regular colonoscopies, even if they don't have any symptoms.

The video of their experiences was released Monday by Lead From Behind, an awareness campaign run by the nonprofit Colorectal Cancer Alliance.

The video stemmed from a bet between McElhenney and Reynolds, who co-own the Welsh soccer club, Wrexham A.F.C. Reynolds didn't think McElhenney could learn the Welsh language.

"He was so sure he said he'd publicly broadcast his colonoscopy if I could do it," McElhenney says in the video – in Welsh.

Although the South Philly native won the bet, McElhenney ended up having his colonoscopy filmed, too.

During a Reynolds' colonoscopy, which lasted about 30 minutes, the doctor removed what he called a "very subtle" polyp from Reynolds and characterized the screening as "potentially lifesaving."

"I'm not being overly dramatic," the doctor said. "This is exactly why you do this. You had no symptoms."

After learning of Reynolds' results, McElhenney, who stars on "It's Always Sunny in Philadelphia," sought to up the stakes.

"They either find nothing and that means my colon was cleaner than his, or they find a polyp and it's either bigger than his, which is awesome, or it's smaller than his, which means I had less of an opportunity to have cancer," McElhenney said. "Either way, I win."

When McElhenney was told his doctor had removed three polyps, he declared victory.

Why are colonoscopies important?

Colonoscopies are used to screen people for cancers of the colon and rectum. Identifying the cancers early increasing the likelihood of survival.

The American Cancer Society estimates that there will be 106,180 new colon cancer cases and 44,850 new rectal cancer cases this year. Colorectal cancer is the third deadliest form of cancer in the United States, but it has become less common since the 1980s.

In the mid-1980s, about 80 in 100,000 men and 60 in 100,000 women were diagnosed with colorectal cancer each year. By 2020, the rate for both men and women had been cut in half. This decline has been attributed to a decline in smoking and increased screenings.

The increased prevalence among younger adults led the U.S. Preventive Services Task Force to drop the recommended screening age for most adults from 50 to 45. The guidelines suggest they receive a colonoscopy once every 10 years.

People with Crohn's disease, ulcerative colitis, genetic conditions that make them more susceptible to colorectal cancer or a family history of the disease may need to begin getting tested earlier and more frequently.

Yale Medicine recommends that patients start looking out for colon cancer symptoms like low energy, rectal bleeding and unusual, dark or black stool as early as their 20s.

What happens during a colonoscopy?

In the days leading up to a colonoscopy, patients are placed on special diets to clear their colons. They must drink a bowel-clearing liquid that causes diarrhea.

During the procedure, a long, flexible tube with a tiny video camera is inserted into the rectum. Medical professionals then look for abnormalities including polyps, which are small growths that can be cancerous. Sometimes, tissue samples are taken, too.

Most colonoscopy patients can return home on the same day, but because the procedure requires anesthesia, they need to arrange a ride. They won't be able to drive for 24 hours.

Patients usually recover within a day, though the procedure sometimes causes cramping or minor bleeding.

Are there other screening options?

Colonoscopies are one of several tests used to screen for colorectal cancer, according to the National Cancer Institute.

A sigmoidoscopy involves inserting a thin, tubelike instrument into the rectum and up to the colon. It contains a light and a camera for viewing and may have a tool to remove polyps or tissue samples. They are later examined under a microscope for signs of cancer.

Colonoscopies are considered among the most sensitive tests available, according to the Mayo Clinic. There also are other less invasive options, but they need to be conducted more frequently than the 10-year gap between colonoscopies.

Virtual colonoscopies rely on a series of X-rays to take images of the colon. Fecal occult blood tests require a small stool sample be placed on a special card or container and sent to a doctor or lab for testing. Blood in the stool may be a sign of polyps or cancer. And DNA stool tests check stool cells for genetic changes that may signal cancer.

Lead from Behind also promotes at-home screening kits, including Cologuard, which can detect the disease through stool samples.