Is rock really dead ... and can the venerable genre co-exist with hip-hop? 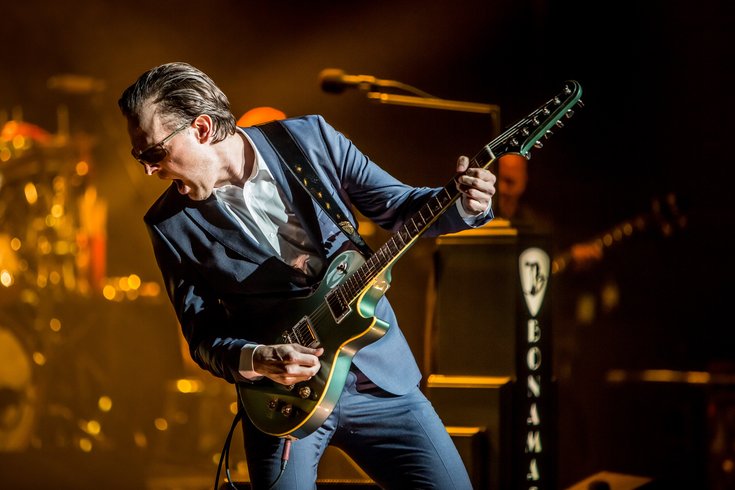 Joe Bonamassa rocked the Academy of Music on Saturday night.

A few guitar heroes played to capacity crowds in Philly over the weekend but is the rock genre here to stay?

During a recent conversation Kiss vocalist/bassist Gene Simmons insisted that rock is dead. “A generation or two ago it was all about rock,” Simmons said. “But today it’s different. People aren’t buying rock music like they used to. It’s a different world. Rock is dead.”

Rock wasn’t dead Saturday night when Joe Bonamassa performed before a packed Academy of Music. The event, which was dubbed “the guitar event of the year,” was an old-school event.

But does rock have a future? “When I look at the music scene and I look at what’s exciting, it’s hip-hop,” E. Town Concrete vocalist Anthony Martini said. “Hip-hop is the new punk. If anyone doesn’t believe that, I’m willing to bet that they’re old. Guitars are great. I’m all about guitars but hip-hop is very popular..”

E. Town, which only plays out occasionally since Martini, aka “Ant Money”, is primarily into music management, is a hardcore punk act. The band’s songs are guitar-driven. “But I’m realistic,” Martini said. “Kids love hip-hop and for good reason.”

“You can like more than one style of music. Go to Europe and people are into everything. They go from one different style of music to the next. When I was growing up, I was into all styles of music. I ended up becoming a rapper but I loved metal since I was a kid."

But Dream Theater guitarist John Petrucci believes there is plenty of life left in rock. Petrucci’s prog-rock band played a sold-out Merriam Theater Sunday evening. “Albums don’t sell anywhere like they used to but that doesn’t mean rock is dead,” Petrucci said. “Rock shows are still very popular. We play to packed theaters throughout our tours. Rock is alive and well and there is a lot of interest in the guitar. I know people are still obsessed with the guitar.”

Petrucci knows from experience. “John Petrucci’s Guitar Universe,” was held in the guitar hero’s backyard of Long Island last summer. The four-day camp, which was capped at 200, sold out quickly.

“It’s a fun but intense workshop,” Petrucci said. “You come in and you leave with a lot more knowledge than when you came in but you have to love the guitar to want to do something like this.”

“I think the guitar is pretty cool,” Petrucci said.

And then there are those who believe that hip-hop and guitar rock can co-exist. Ice T, who has had a successful career as a rapper and the frontman of the incendiary metal act Body Count, is certain that there are enough fans to support both genres.

“There’s no doubt about that,” Ice T, aka Tracy Morrow, said. “You can like more than one style of music. Go to Europe and people are into everything. They go from one different style of music to the next. When I was growing up, I was into all styles of music. I ended up becoming a rapper but I loved metal since I was a kid.

"I love Slayer and (his close friend) Ernie C was obsessed with metal too. I formed a rock band (Body Count) so Ernie C could play guitar. I’m an example of someone that has it both ways. That can be the way it is for anybody. You don’t have to choose. You can have it all.”