When he's done, the vertical height Mark Gibson traveled will be equal to ascending and descending Mt. Everest 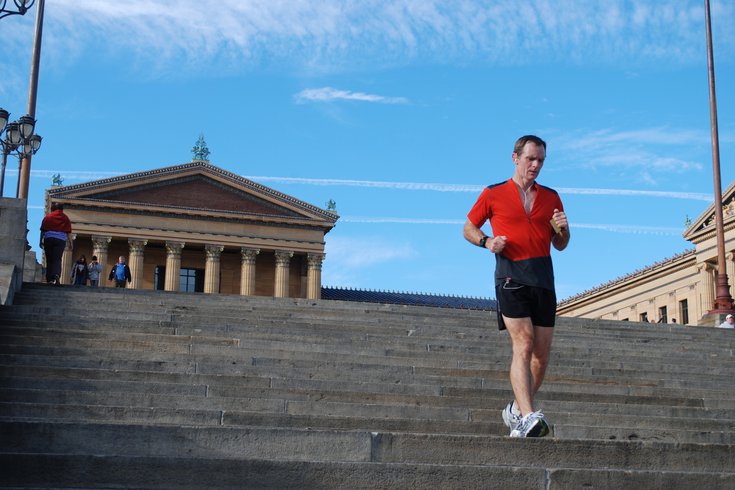 Starting Nov. 19, Mark Gibson will run up the steps of the steps of the Philadelphia Museum of Art nearly 900 times — all totaled climbing the equivalent of the height of Mt. Everest. The feat will raise money for childhood cancer research through Alex's Lemonade Stand.

He has run the length of the Grand Canyon twice; biked across the country from Santa Cruz, California, to Ocean City, New Jersey; and run from Pittsburgh to Philadelphia in 10 days — a feat that required he run the distance of a marathon each day.

But this year, he wanted to do something a little different.

Later this month, one day after he turns 60, Gibson will ascend the 72 steps at the Philadelphia Museum of Art nearly 900 times. The sum of recreating Rocky Balboa's famous run over and over will be the equivalent of climbing and descending Mt. Everest, which stands more than 29,000 feet tall.

The run will raise money for the Alex's Lemonade Stand Foundation to fund childhood cancer research. Gibson, who lives in Perkasie, Bucks County, owns a gymnastics studio where he's worked with families of children battling cancer. He said he knew this was the charity he wanted to support because it was local to the Philadelphia area and he has seen what they can do firsthand.

So Gibson started training and fundraising for what he is calling the Rocky Steps Everest Challenge – a run that he estimates will take 24 hours to complete, factoring in rest and bathroom breaks. He's scheduled to start on Nov. 19.

"These are kids that have to be persistent, and their challenge makes my little thing up and down the steps look minute," Gibson said. "I wanted to give something to the kids in Philadelphia, and it was a good cause I could get behind."

To date, he's raised more than $1,300 and said he hopes to get to $2,000 by the end of his run. Donations can be made for Gibson's Rocky Steps Everest Challenge here, and donations directly to Alex's Lemonade Stand can be made here.

Gibson choose to run the Rocky Steps because of the strong message of the movie.

He has a motto when it comes to training: "Don't get ready, stay ready." Gibson said he's been heading to the art museum steps about every week to prepare for the run and get used to the monotony.

It takes Gibson 1 minute, 20 seconds to run up and down the steps.

When Gibson turned 50 years old and received his invitation to join AARP, that "wakeup call" sparked a decade-long pursuit to do one adventurous, physically challenging thing every year.

"I'm driven by the possibility of failure," he said. "If you know that you'll succeed, you're not thinking big enough. There has to be that element of failure."

As for choosing Everest as the height he was going to scale, Gibson said, "If you're going to run up and down a hill, why not make it the biggest hill in the world?"

Not long after Gibson finishes his Rocky Steps Everest Challenge, Alex's Lemonade Stand will host its annual fundraiser, the Virtual Lemon Climb on Nov. 21, where participants chose to climb the equivalent height of one of four different U.S. structures: the Statue of Liberty, Seattle's Space Needle, the 600 Travis Building in Houston or the Empire State Building. So far, that event has has raised over $40,000 for the charity.