The limited release, dubbed 'I Stand with Ukraine,' combines lemon and blue raspberry to resemble the flag of the Eastern European country under siege by Russia 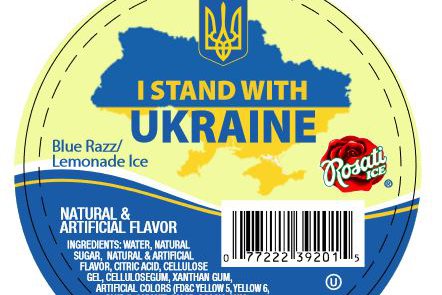 Rosati's limited-edition water ice flavor, 'I Stand with Ukraine,' will be available on May 1. It combines lemonade and blue raspberry, making it resemble in the Ukrainian flag in the cup, and proceeds from its sale benefit an orthodox church in Delaware County that is helping Ukrainian refugees overseas.

Rosati's will release a new flavor next month to support the humanitarian efforts in Ukraine being led by a Catholic church in Delaware County.

The new flavor combines lemonade and blue raspberry water ice, side by side, in a traditional Rosati's cup to resemble the Ukranian flag, and it is being called "I Stand with Ukraine," the Clifton Heights-based company wrote in a press release earlier this week.

The flavor will be sold starting Sunday at 10 ShopRites stores in Philadelphia and the surrounding Pennsylvania suburbs, along with various ice cream shops and mobile-vending locations.

A portion of the proceeds from the sale of the flavor will be donated to the Holy Myrrh-Bearers Ukrainian Catholic Church in Swarthmore, which has been collecting money and supplies for Ukrainian refugees since the beginning of the Russian invasion.

All funds raised are "wired directly to the refugee centers in Ukraine and neighboring countries" and used to "provide food, clothing, medical supplies, transportation, and housing for those displaced," Daniel Troynan, the church's pastor, said in the press release.

The church, at 900 Fairview Road, is holding a fundraiser at 8:30 a.m. on Tuesday, May 3. Rosati's will be there giving away free cups of "I Stand with Ukraine" to volunteers and those who donate.

Rosati's has been making Italian water ice for 110 years, since it was started in 1912 by Sam Rosati, who began making the lemon water ice in his West Philly home.

The company's 110th anniversary is Tuesday, which is also National Italian Ice Day.