RSL 1, Union 0: Player grades and analysis of a team stuck in 'first gear' 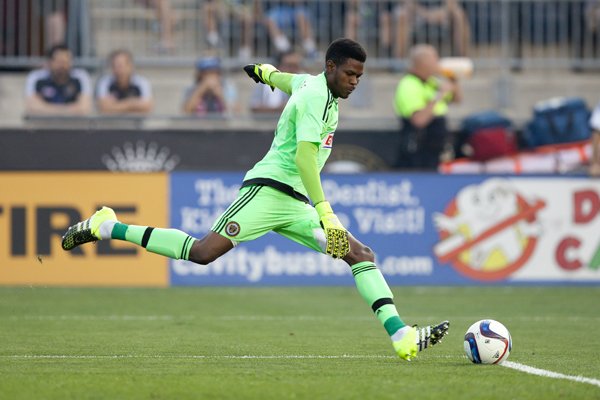 Andre Blake had seven saves in the Union's 1-0 loss to Real Salt Lake on Saturday night.

Union head coach Jim Curtin summed it up perfectly when he told reporters that his team couldn't "get out of first gear" in the 1-0 loss to Real Salt Lake.

Nobody expected this club to win seven games in a row, but a lot of elements that were key to the recent winning streak seemed to disappear on Saturday night in Utah.

The tenacious team defense was lacking as second balls fell to the opponent. A smaller and shiftier Salt Lake attack was able to control more of the game and limit time and touches for Haris Medunjanin in the middle of the park. Individual performances were not as impressive as they had been in weeks past, which is understandable considering the high level of play that probably was not sustainable, especially playing in altitude and on the road.

Philly did have two chances to open the scoring, striking the crossbar in the early going before having another attempt cleared off the line a short time later. It was the second half that was disappointing, with an underwhelming response to RSL's eventual game-winner.

What happened on the goal?

Here's another look at the game-winning sequence. On replay, it looks rather innocuous, right?

The Union have it defended well to start.

You've got the four members of the backline all within a yard or two of the four RSL attackers. Ray Gaddis has a far side assignment on Luis Silva while Fabinho tracks Tony Beltran's run. Oguchi Onyewu steps to Joao Plata and Jack Elliott is rotating over to pick up Jefferson Savarino. 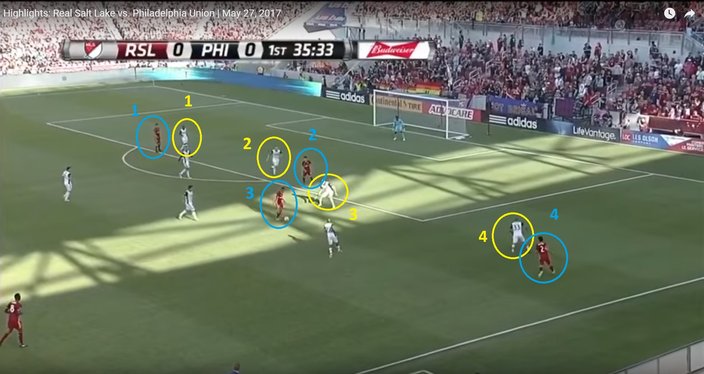 You see the Union fullbacks are stretched a bit laterally here. That's the product of smart movement and spacing from RSL. Medunjanin and Fafa Picault seem to be close enough to get involved, but it doesn't materialize in that fashion.

When the play develops, Onyewu stays with Plata while Elliott also steps to the same player. That little peel and slip by Savarino puts him behind the defense and I believe both Union fullbacks end up keeping him onside.

So it's a bit of everything here. It's clever attacking movement from RSL, the Union center backs step to the same player, the stretched fullbacks keep a player onside, and most of the midfield looks to the assistant referee for the flag instead of busting a gut to make a play.

It's antithetical to the "help" defense that the Union have been so good at this month. 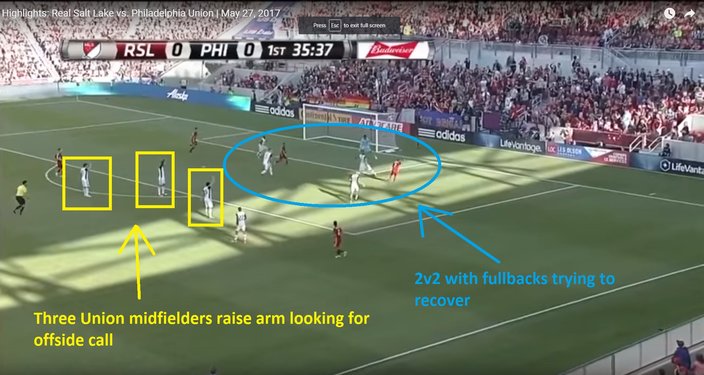 A lesson in possession

People spend a lot of time talking about possession, which can either be a very important or completely useless statistic.

The reason the numbers look so even is because of large swings in the interval data collected.

Take a look at the chart below: 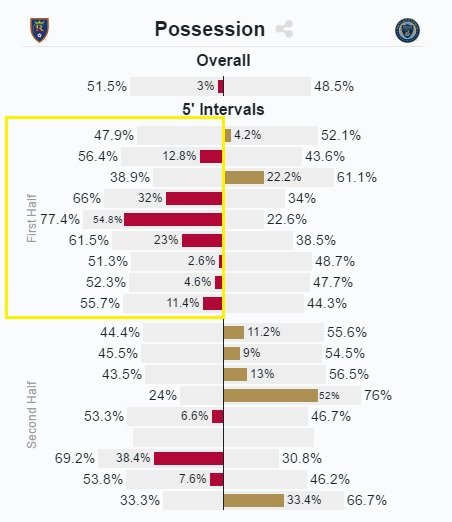 You see the overall possession numbers at the top.

What follows is five minute intervals for each half, illustrating the ebb and flow of the game. There are a couple of large spikes in Union favor, with that 76% number from minute 60 to 65. The Union had more of the ball in the first 20 minutes of the second half, playing down a goal.

What sticks out more is the yellow box, which shows a first half where RSL had more control for seven of the nine intervals. That chunk from minute 20 to minute 45 had some lopsided bars, where RSL attempted 25% of their shots in a smaller, 14-minute period.

For comparison, here's what the chart looked like in the 2-0 home win against Houston: 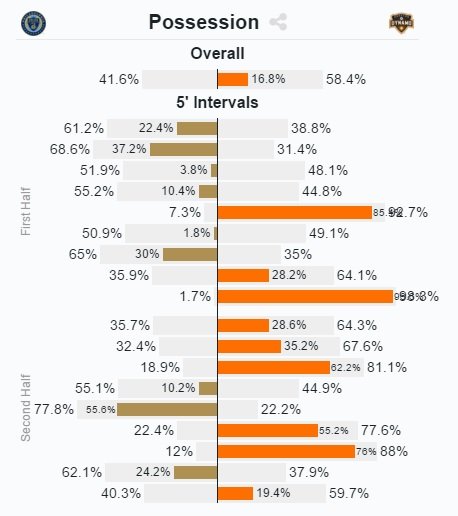 If you're partially colorblind like me, then the green vs. orange might be hard to see, but Houston finished this game with a 16.8% advantage in overall possession despite getting mostly slapped around by the Union.

For context, Philly comfortably controlled the four opening intervals and capped that off with a 17th minute Picault goal.

The next five minutes feature 92 percent Houston possession, which is a combination of a few things.

After the goal, Philly sat back a little bit on a 1-0 lead. Fabinho conceded a free kick and Houston won four balls that went out of play. Alejandro Bedoya also picked up a bit of a knock and decided to stay on the field. He wasn't chasing players and winning the ball, he was limping around trying to walk off the bruise. Those are a bunch of small things that don't mean much, but they explain why the Dynamo had ridiculous possession during that interval, skewing the overall number in their favor.

You also have to consider tactics and style, and in this case the Union scored the second goal off a turnover and quick counter movement. That's not the product of possession, which renders the stat mostly pointless for that scenario.

So that's the key with possession. It's less about the overall number and more about in-game intervals with appropriate context. In the RSL game there was only one instance where the Union put together multiple intervals of superior possession.

Playing on the road in altitude is going to be extremely taxing for a hard-working center forward.

Sapong finished with one off-target shot and spent more time tracking back defensively as the Union struggled with clear-cut chance creation.

Relatively quiet, he did manage a pair of first-half shots but just didn't see enough of the ball.

He had the dangerous transition moment in the tenth minute, but probably picked the wrong pass when he tried to hit Pontius on a 2v1 with the outside of his right boot.

Ilsinho finished with zero shots and zero key passes in a pedestrian performance at the number ten.

Unlucky to have his header cleared off the line, Picault was the Union's best first-half threat.

I was a bit surprised to see him subbed out after 60 minutes.

He had his work cut out for him as he tried to shackle a mobile RSL midfield.

Bedoya had 19 defensive actions and covered acres of space in his box to box role, understandably conceding a few fouls and picking up a caution in the process.

It feels like he wasn't as influential as he usually is, but when you watch the game again and look at the charts you see four key passes. One was played inside his own half and sprung Picault for the double-save that kept Philly off the board.

Defensively, he did have 11 actions, which is pretty solid. There were just too many moments where both he and Bedoya were having a bit of trouble closing down the smaller and quicker Luke Mulholland and Albert Rusnak, who made sharp and incisive decisions with the ball at their feet.

Sure, he kept Savarino onside on the goal-scoring sequence, but there was blame to go around on that play.

Going forward, he had two unsuccessful cross attempts and was dispossessed twice in RSL's half of the field. Those are situations where Keegan Rosenberry probably would have pumped the ball into the box.

Gaddis is the better defender but isn't going to belt the ball into dangerous attacking areas.

There was one clearance that came off a body and fell to Plata for a shot attempt. Later, he had the header that struck the crossbar.

I'm not sure if he could have played the goal-scoring sequence differently, but we'll see what Curtin says at Wednesday's press conference.

For the most part, the center backs did alright. Again, it was that one sequence where Savarino slips Onyewu for the give-and-go.

I think Gooch is supposed to follow in that case, but he's also thinking of stepping up to block a shot attempt, since Plata is already within shooting distance at 18 yards away. Think of it as defending a basketball pick and roll.

He won a few fouls, lost a few fouls, cleared some balls and intercepted others. You could argue that, among the four defenders, he was least culpable on the goal.

Probably the best Union player on the field, he kept his team in the game with a couple of fine saves.

Some nice touches in the holdup game, he was starved of service and couldn't get a sniff of the ball in front of goal in a 29 minute shift.

In 19 minutes, Alberg missed on a tackle attempt and played one pass without success. This is his entire chart: 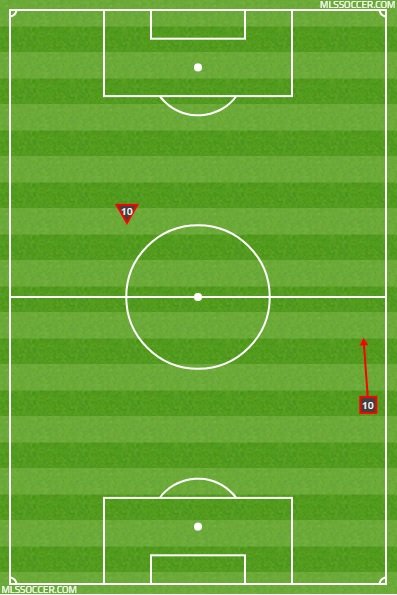 On his MLS debut, he snuck a key pass into the box and tried twice to run at defenders in space.

No issues that I recall. I think the four cautions made sense.