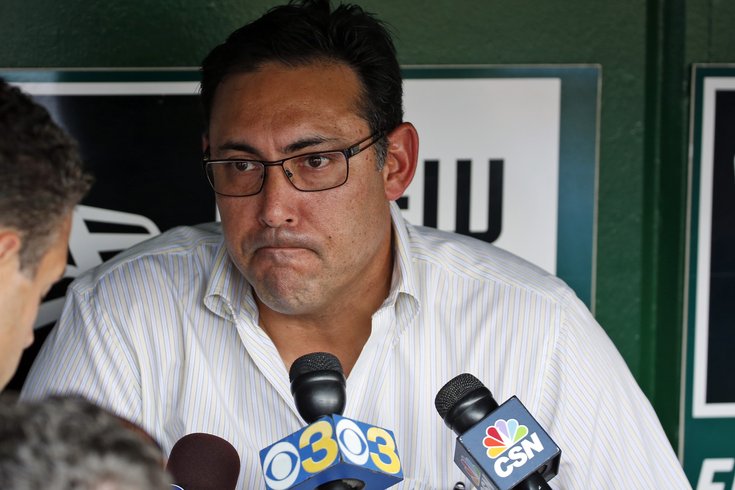 Phillies general manager Ruben Amaro pauses while speaking during a media availability before a baseball game against the Washington Nationals at Nationals Park Thursday, July 31, 2014, in Washington.

Phillies fans, general manager Ruben Amaro, Jr. wants you to know that he is sorry -- not for what he's done to the team over his seven years in charge, but for what he called "misguided quotes."

Earlier on Tuesday, Jim Salisbury of CSNPhilly.com published an interview with Amaro in which he said fans who "bitch and complain" do so because they "don't understand the game" and "the process" by which he is rebuilding the club.

“They don’t understand the game,” Amaro said. "They don’t understand the process. There’s a process. And then they bitch and complain because we don’t have a plan. There’s a plan in place and we’re sticking with the plan. We can’t do what’s best for the fan. We have to do what’s best for the organization so the fan can reap the benefit of it later on. That’s the truth.”  [csnphilly.com]

Throughout the day, Amaro went on a media tour filled with backtracking, softening and whole lot of putting-into-context.

But then, prior to the Phillies matchup with the Mets at Citi Field, Amaro met with the Philly media, and offered a long-winded apology to any fans he may have offended. Ryan Lawrence of The Daily News has the full transcript, but here are some highlights:

“Obviously it’s caused a bit of a firestorm in Philly,” Amaro began Tuesday afternoon. “The first thing I wanted to say about the comments I made is, one, I’d like to apologize to the fans. I’m a fan myself. I understand the passion and the knowledge that our fans have for our game and the other major sports, all the other sports in Philly. The comments weren’t meant to disparage our fans by any stretch of the imagination. I probably used my words incorrectly or poorly. I want to apologize for that.

“When (I was asked) about our club and the organization and some of the things that we’re doing with some of our young players, listen, I’m as excited about seeing these guys, the (Aaron) Nolas, the (Zach) Eflins, the (Roman) Quinns, and some of the other players who are having a lot of success right now and many of them. I’m as excited about seeing them in the big leagues as anybody else. But there’s a process they have to go through. There’s a process and a plan in place. And I think that was more of the point.

“I understand why the fans would want … because we’re not having a ton of success at the Major League level right now, why the fans would want to see these guys. But I think it’s incumbent upon the organization to make sure we do it at the right time and do it with the right plan in place. I will say this, if the fans are as excited about seeing these guys as I am, we’re one of those situations with the exception of Clearwater, they can go see these guys. Lakewood, there’s (Carlos) Tocci … there’s guys obviously in Reading. They’re not that far down the street. They’re close. They want to get a glimpse before they get to the big leagues there’s an opportunity to do that. And in Lehigh Valley when eventually some of these guys will be there at the appropriate time. It’s important for us to make sure that we don’t get … I get antsy about bringing the guys from Double-A to the major leagues. I got antsy about (Ken) Giles last year. I got antsy about a lot of guys. We also have to be at the tip of that, and try to make the right baseball decisions for the player and for the organization moving forward. I think that was kind of the gist of the conversation I was having and I used my words poorly.”  [philly.com]

The problem with Amaro's apology is that he continues to come off as a know-it-all, talking about "a process and a plan" again. He's not apologizing for what he said, but rather the reaction to what he said. It's not because he is any less convinced of his previous assessment of the fans.

To a certain extent, he's right. He does know more than you -- or, more appropriately, he should know more than you. He is, after all, in a position to have more information than just about any fan. It's what he does for a living. I don't pretend to know more than my doctor, but that doesn't mean I have to like everything he tells me.

Still, there was something in the subtext of Amaro's apology -- and perhaps I'm reading too far into this -- that made me recoil. A simple "I'm sorry" would have sufficed, but Amaro felt the need to parse every word of his quote, something defensive people tend to do.

Here are two other quotes from Lawrence's story -- again, I recommend checking out the whole thing -- that didn't sit well with me.

"I think the thing that bothers me the most about this stuff that happened today and the quotes I made is that I don’t want to detract from the fact that there are some really positive things happening here in a way that the fans can focus on those. Hopefully they can focus on the progress as opposed to my misguided quotes.” [...]

"If you look at the breadth of the story … our job is to make sure the fans love this club for a long time, and we have to do what we can to put the team in a position for the fans to enjoy it. Sadly, that point gets lost because of my quote.”

It almost seems like he's trying to quickly shift blame back on the fans, saying that he was taken out of context. If that's the case, then he shouldn't be apologizing to us. But that's not what's at play here. Not entirely.

He's lost any cache he's had with fans in the years since the Phillies won 102 games in 2011. And now that the team may lose 102 games just four years later -- with no end in site -- fans are naturally frustrated.

Amaro shouldn't be surprised fans reacted the way they did. He should know better. He's the reason for all this frustration in the first place...

Checking with the boss

Amaro acknowledged he spoke with team president Pat Gillick about those comments.

"Am I worried about it for me now? I'm more worried about it for the organization because the organization shouldn't have to suffer because I made a bad quote," Amaro said. "It's unfortunate, but I think it's been taken out of context in some ways. Take the quote out and pull it out of (the) story and look at the length of the breadth of the story."Philadelphia began the day fourth in the NL East at 19-28, and Amaro said he's as excited as anyone else about seeing the organization's best prospects in the big leagues.

"But there's a process they have to go through. There's a process and a plan in place, and I think that was more the point," he explained. "I understand why the fans would want — because we're not having a ton of success at the major league level right now, why the fans would want to see these guys — but I think it's incumbent upon the organization to make sure we do it at the right time and do it with the right plan in place.