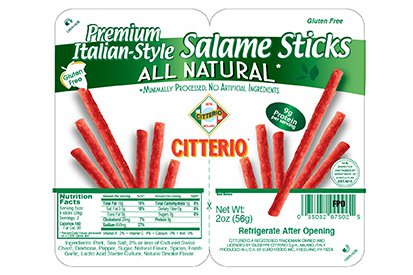 The Centers for Disease Control and Prevention is warning stores and consumers to not eat, sell, or serve Citterio brand Italian-Style Salame Sticks due to a Salmonella outbreak.

Citterio brand Italian-Style Salame Sticks, primarily sold at Trader Joe's stores, have been linked to a salmonella outbreak, according to the U.S. Centers for Disease Control and Prevention.

In the food safety alert issued Saturday, stores and consumers are warned to not eat, sell, or serve this brand of salami sticks. Trader Joe's has voluntarily stopped selling the product, while the CDC continues to investigate the outbreak.

Twenty people in 8 states – New Jersey, California, Kansas, Minnesota, Illinois, Michigan, Virginia and New York – have reported becoming ill after eating the product. Three of them had to be hospitalized. No deaths have been linked to the outbreak so far.

Because some people may have recovered without seeking treatment, the CDC said that the true number of sick people is likely more than what has been reported and may also affect more states.

The Citterio cured-meat sticks are sold at Trader Joe's grocery stores and may be sold at other stores as well. Investigators are still trying to determine if there are additional products that have been contaminated.

Consumers who have already purchased this product are advised to throw it away and wash any items that may have come in contact with it with hot soapy water or in the dishwasher.

Symptoms of salmonella are diarrhea, fever and stomach cramps. Symptoms can start between six hours and six days after ingesting the bacteria.

Most people only experience mild symptoms and recover without treatment within four to seven days. However, children younger than 5, adults 65 years and older and people with weakened immune systems may become more severely ill,. About 80% of the people affected so far have been younger than 18.

If you experience a fever higher than 102°F, diarrhea for more than 3 days, bloody diarrhea and severe vomiting where you cannot keep any liquids down, call your health care provider immediately. Dry mouth and throat, feeling dizzy when standing up and urinating very little are all signs of dehydration.

It is important to note that this outbreak is separate from other current salmonella outbreaks and is caused by a different strain of the bacteria. Another outbreak linked to raw onions has been reported in Pennsylvania and New Jersey as well 35 other states.