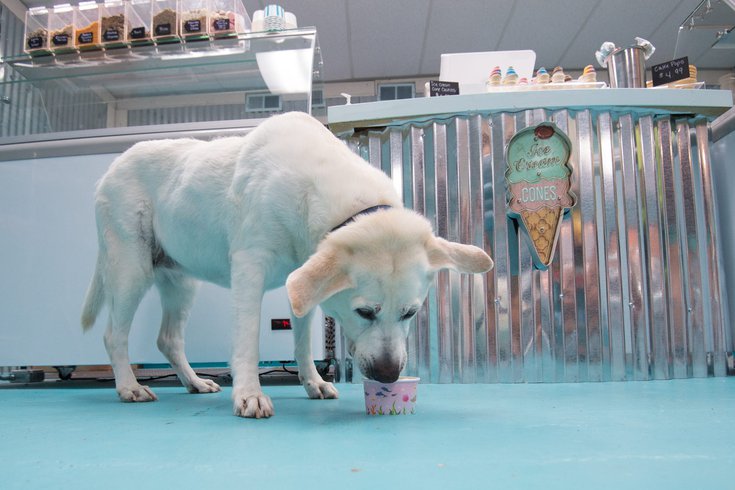 Dogs can enjoy ice cream, doughnuts and other treats at Salty Paws' new location in Rittenhouse Square. Above is a file photo of a dog enjoying a cup of ice cream at the company's original shop in Rehoboth Beach, Delaware.

Dog owners in Philadelphia who want to spoil their pups with a frozen treat can now do so at Salty Paws ice cream parlor and bakery in Rittenhouse Square.

The canine ice cream shop opened on Saturday at 211 S. 17th St., just a block away from the neighborhood's park that is constantly teeming with pooches.

This is Salty Paws' inaugural location in Philly and the shop touts itself as the first doggie ice cream bar in the city.

The company opened its first location in Rehoboth Beach, Delaware in 2018 and has gone on to open eight more, including one along the Jersey Shore in Stone Harbor, Cape May County last year.

Salty Paws' Philly location was started by Karla Shanesy, who recently moved to the city from Pittsburgh in order to be closer to her oldest daughter. After losing her job as a pharmacist, Shanesy said she was ready to start something new.

Shanesy, who has three dogs and two cats, said that Philly was the perfect spot for a Salty Paws shop given how dog-friendly the city is.

There is a full toppings bar with add-ons like meat crumbles, mini dog biscuits and yogurt chips for $1 each. One-scoop cups cost $5 and three-scoop dog bowls go for $7.

Salty Paws also has a dog bakery that serves doughnuts, cookies and cake mix. Bones, biscuits, toys and dog collars are available too.

Dogs can sit and enjoy their treats at one of the shop's tables or take their snacks to go. The shop sells powdered ice cream that can be made at home as well.

A dedicated event space is planned for the upstairs where customers will be able to have a dog birthday party, ice cream social, breed meetup or fundraising event.

The parlor's treats are safe and healthy for cats too and it has a selection of feline items for sale.