Historic Phillies memorabilia, including Baker Bowl seats, up for auction 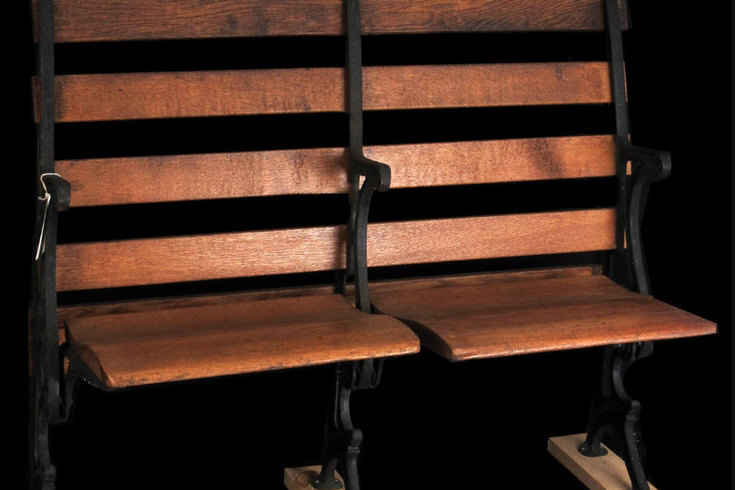 A pair of seats from the Baker Bowl, which housed the Phillies from 1887 to 1938, is being auctioned off by Huggins & Scott Auctions.

Phillies fans will get to revisit Philadelphia's rich baseball history this weekend when the team hosts the Oakland Athletics at Citizens Bank Park to open the 2022 season.

From 1901-1954, the clubs both called Philadelphia home before the Athletics moved to Kansas City in 1955.

But fans who are looking for a piece of early Phillies history now can bid on a collection of nearly 220 memorabilia items dating from the 19th Century through the post-World War I era.

But fans who are looking for a piece of Phillies history that will last beyond this weekend can now bid on a collection of nearly 220 historical items that are up for auction.

The highlight of the collection is a pair of seats from the Baker Bowl, the Phillies' home ballpark from 1887-1938.

Described as "jaw-droppingly beautiful and historic," the lower-deck seats are believed to be the first of their kind to survive the stadium and make it to an auction block. The auction group said the seats aren't damaged, despite the fact that they were likely in use when the North Philly ballpark was in disrepair and its lower-deck seating in right field collapsed in 1927.

The seats' cast-iron supports and wooden slats have been preserved, and the hinged seats are fully-functional, according to the auctioneers. The legs of the seats have been mounted to wooden supports for use and display purposes. Some replacement screws have been put in to stabilize any side-to-side wiggle that can damage seats that are at least 100 years old. "PHIL. Ball Club." is engraved into one of the arm rests.

However, if you want the Baker Bowl seats, it's going to cost a pretty penny. Bidding for the seats opened at $5,000 and currently stands at $5,600. There also may be additional shipping charges due to the size and weight of the seats.

Other notable auction items include a 1915 World Series press pin and ticket, a 1910-14 Phillies pennant and a Hall of Fame plaque postcard signed by pitcher Grover Cleveland Alexander.

Each of the items in White's collection can be bid on until Thursday at 11:30 p.m. The auction is being operated by Maryland-based sports memorabilia house Huggins & Scott Auctions.

The Baker Bowl, located on Broad Street between West Huntingdon Street and West Lehigh Avenue in North Philly, was built to fit inside a city block. The stadium's design resulted in some odd playing field dimensions.

The boundary of the entire outfield was defined by a brick wall standing at least 20 feet tall. That height compensated for a short right field, where the wall was just 310 feet away from home plate. But the left field wall stood about 500 feet away. Legend is that no batter ever hit a ball out of the Baker Bowl's original field.

Except for the brick walls in the outfield and those on the stadium's exterior, the Baker Bowl was constructed almost entirely from wood, which was not unusual for stadiums built in the late 19th century. However, in August 1894, the Phillies were practicing at the ballpark when a fire erupted in the grandstand and engulfed the wooden structure, leaving nothing standing except the stadium's brick walls.

The Phillies rebuilt the Baker Bowl, erecting a state-of-the-art cantilevered pavilion of steel and brick in time for the start of the 1895 season.

During a doubleheader against the Boston Braves in August 1903, a portion of the ballpark's upper deck collapsed, killing 12 people and injuring more than 200 spectators. The incident occurred after fans rushed to see a disturbance taking place on the third-base-line balcony, causing a sudden shift in weight.

The Baker Bowl was known by several names during its history – first as Philadelphia Park or Philadelphia Base Ball Grounds. The stadium's formal name was Philadelphia National League Park, and it frequently was called the Huntingdon Street Grounds. The ballpark's lasting moniker came from former Phillies owner William Baker.

During their tenure at the Baker Bowl, the Phillies won their first National League pennant in 1915 and advanced to the World Series, losing to the Boston Red Sox. The ballpark sat as many as 20,000 spectators in the late 1920s.

In 1938, the club moved to Shibe Park, the home of the Athletics, who played in the American League. The Baker Bowl was the first home field for the Eagles from 1933-1935 before the team moved to Philadelphia Municipal Stadium.

The stadium was demolished in 1950 and later named a Pennsylvania Historical Marker.