Sam Bradford did not want to follow Chip Kelly to San Francisco; explains why he returned 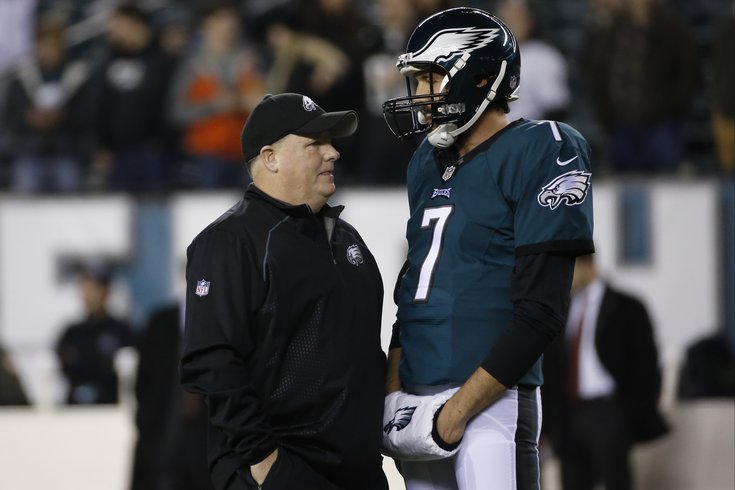 Sam Bradford has seen a lot of coaches over the course of his NFL career. In fact, Doug Pederson and Frank Reich will be the fourth head coach and offensive coordinator, respectively, for whom Bradford has played in seven years.

Back in December, Bradford said he wanted no part of learning a new system once again.

"I think throughout my career, I’ve learned that learning new offenses every year, it’s just hard to continue to improve," said Bradford. "You are always learning. You are learning new verbiage, learning new plays, learning new systems. And I would really like to stay in the same one and have the opportunity to play a second year.”

It turns out Bradford is a fan of Pederson's offense, as it is similar to what he ran his rookie season in St. Louis. It was also a "bonus" that Pederson himself is a former quarterback.

"My conversations with coach have been great," he said. "I think the fact that he played the position was a huge bonus for me. I think being able to have conversations with someone who’s been on the field and seen it from a quarterback’s perspective, I think that was huge.

"Also the fact that the offense is very similar to what we ran with Shurmur when I was in St. Louis. Obviously it’s going to be new, it’s going to be a transition and it’s going to take time, but it is something that I am familiar with. We’ve kind of briefly talked about some of the terminology, and some of the words and things that we use are fairly similar. Obviously it’s going to take some re-learning because it’s been a few years since I’ve heard and used those terms, but I think my familiarity with that type of offense in that system, and obviously his pedigree, and him playing the position are really why I really wanted to come back too."

Under Kelly, as we all saw for the last three years, the objective was always to get up to the line as fast as possible to run the next play. It doesn't appear as though Bradford favored that approach, and he seems to think it wasted part of his skill set.

"I think my mind is a great attribute to my game," said Bradford. "I enjoy being able to go to the line and make those checks, make those audibles. I think just talking to (Pederson) and the freedom that he gave Alex in Kansas City, I’m looking forward to that. That’s something that I’ve done in the past. Obviously, we did it a little bit more toward the end of the year last year, but I think that any time you can save yourself from wasting plays and you can get yourself into a better play, I think you have a chance to be successful."

In the final game against the Giants last year after Kelly had been fired, Bradford was given the freedom to call audibles at the line of scrimmage. Watching the tape of that game, Pederson noted that his offense will look similar to what Shurmur ran that day.

"That was very similar to what I bring to the table and the offensive structure that I'm going to bring, where he can have a little flexibility at the line of scrimmage to get in and out of plays," said Pederson. "I know Pat was kind of in charge that last game and he put him positions that way to be successful. Those are the things that I'm going to continue to bring and develop him."

Also, a strong market didn't develop for Bradford elsewhere. So, you know, that probably factored in too.