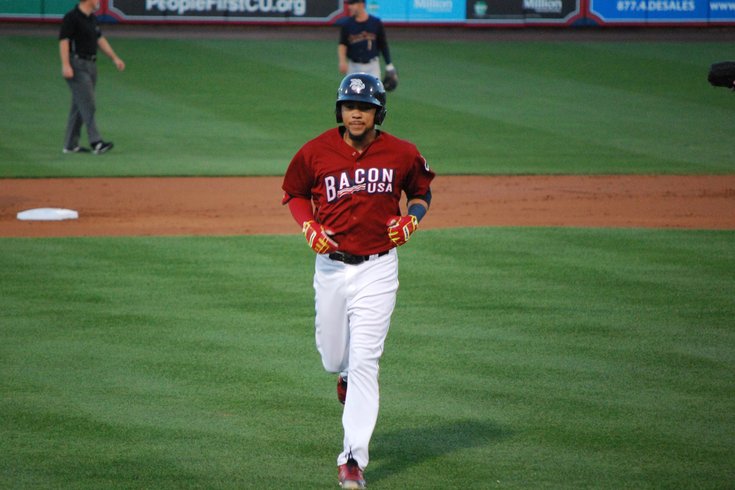 J.P. Crawford has struggled since the All-Star break at Triple-A Lehigh Valley, hitting .212 with a .306 OBP in 40 games.

ALLENTOWN – J.P. Crawford was the last man standing in the latest round of the intense ping-pong games that are a constant in the cozy home clubhouse at Coca-Cola Park, which isn’t surprising given his ultra-competitive nature.

When the doubles game was over, the top prospect in the Phillies organization (and a shortstop regarded as one of the top five of prospects in all of baseball, too) made a quick pit stop at his locker stall, grabbed his things, and made his way out to the field for more competition. The 21-year-old Crawford joined his teammates for pregame batting practice before Triple-A Lehigh Valley opened its International League semifinal playoff series against Scranton Wilkes-Barre.

But this hasn’t exactly been the kind of year most high-level prospects expect to have when they’re on the cusp of the major leagues. Crawford has struggled for most of the summer offensively.

“Definitely,” Crawford said before Wednesday night’s game in Allentown. “It was a year of learning new things, learning how to struggle and how to get out of slumps. I’ve definitely faced a lot of adversity, but luckily I’ve had a good team and good friends that we’re able to pick me up when I was down.”

Crawford, the 16th overall pick in the 2013 draft, said several veterans, including Emmanuel Burris and Cody Asche, have helped him throughout a summer that began with promise, jumping from Double-A to Triple-A in mid-May.

“He’s had some inconsistent runs along the way,” Lehigh Valley manager Dave Brundage said. “But he’s still finding himself. He goes about it the right way. I like his attitude, I like his approach. He’s got a keen eye and a great understanding of the strike zone, almost to a fault at times. He’s still trying to find himself and still trying to figure out who he is and what he’s going to be.”

Crawford doesn’t turn 22 until January and the Phillies aren’t competing for anything this month, so there really is no rush in getting him to the major leagues anyway. When you add in the fact that he doesn’t have to be added to the 40-man roster this winter (while nearly a dozen other prospects do have to be added, or else exposed to the Rule 5 Draft) and it’s actually not the worst thing in the world that Crawford is still “finding himself,” to use Brundage’s words.

If Crawford joins the Phillies early next season, he’ll be the same age Maikel Franco was when he became a major league regular. And obviously, Franco is still a developing player (and not a finished product) at the big league level. So, again, no rush.

Just four months ago, Crawford looked like he might push his way up to Philadelphia before the end of the 2016 season. After sporting a .398 OBP and playing solid and sometimes spectacular defense in six weeks at Reading, Crawford was promoted to Triple-A.

“It's weird to think I'm only one step away (from the major leagues),” Crawford said at the time.

Crawford showed he was worthy of the jump from Double-A almost immediately. He hit .292 with a .264 OBP, eight doubles, two home runs, and a triple in 36 games from the start of June through the All-Star break.

But then, like every player – regardless of talent, league, or level – Crawford endured a long slump.

Entering Wednesday’s postseason opener, Crawford has hit .212 with a .306 OBP in 40 games since the International League’s All-Star break. He has just five extra-base hits in 175 plate appearances over that span.

When the minor league season ends, Crawford will work to improve his game this winter.

“Just getting stronger, I think that’s the main thing for me,” Crawford said of his offseason plans. “Hitting the weight room better this year and see where things pan out for next year.”

As 2016 draws to a close, perhaps the good news for Brundage and Co. is that two of those aforementioned five extra-base hits since the All-Star break came in the final regular season series over the weekend, including a home run on Saturday.

“I think certainly he’s strong enough mentally and physically to handle it, the ups and downs,” Brundage said. “I see him starting to come out of it and having much better at-bats of late. Hopefully it carries over into the playoffs.”

With the way Freddy Galvis has held his own (despite his obvious flaws) in the big leagues, it would be more than a mild shock shock to see Crawford move from Allentown to Philadelphia as a late September call-up in the coming weeks. But the kid from Southern California hasn’t even let that enter his thought process as he bounces from the ping-pong table to the batting cage and onto the field with the ‘Pigs.