From 9/11 to father's fatal plane crash, New Jersey paramedic has learned lessons in coping with tragedy 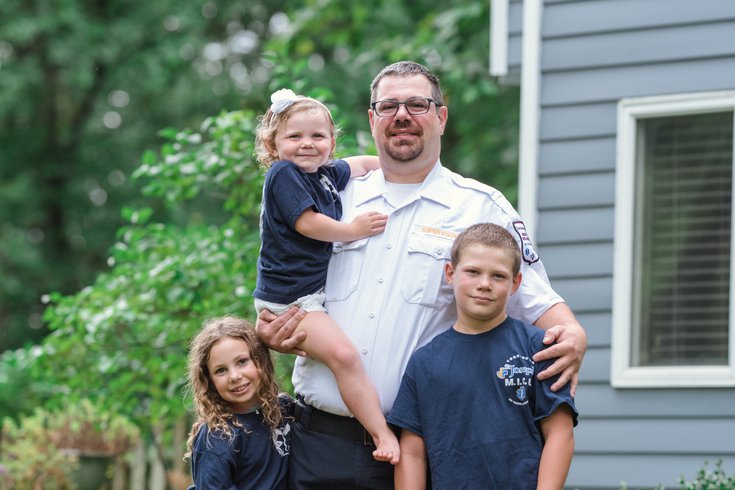 Scott Coppolo, pictured above with his children, was among the emergency responders involved in rescue efforts following the 9/11 terrorist attacks in 2001.

Scott Coppolo got the call that clear and sunny morning when he arrived to work in Newark. It was an all-hands-on-deck situation at the Jersey City pier just across from Lower Manhattan. Coppolo, then 20, was new to the EMS job in North Jersey.

"I was volunteering for the state squad," he says. He and a few others drove ambulances toward a site that would become synonymous with one of the most painful days in modern American history. It was Sept. 11, 2001.

"All you saw was smoke," remembers Coppolo, who heard the first World Trade Center building collapse in a matter of minutes. After that, it was havoc. Injured people covered in dust and debris were being brought in on ferries that usually transported tourists and commuters. "I remember feeling apprehension, but going into a kind of autopilot," he says. "We got inundated with people."

Coppolo had what he calls a "freak-out moment." He called his father, a retired Army major.

"It took me forever to reach him. I dialed, and dialed and dialed." When they finally connected, his father imparted a piece of advice that has stayed with him ever since. "He said, 'You need to do your job.'" Coppolo says, remembering those words 19 years later from his living room in Mt. Olive, New Jersey.

It would be a lesson that would stay with him through the harrowing days of 9/11 to hurricanes Katrina and Sandy, and even to the airplane crash site that changed his family forever. 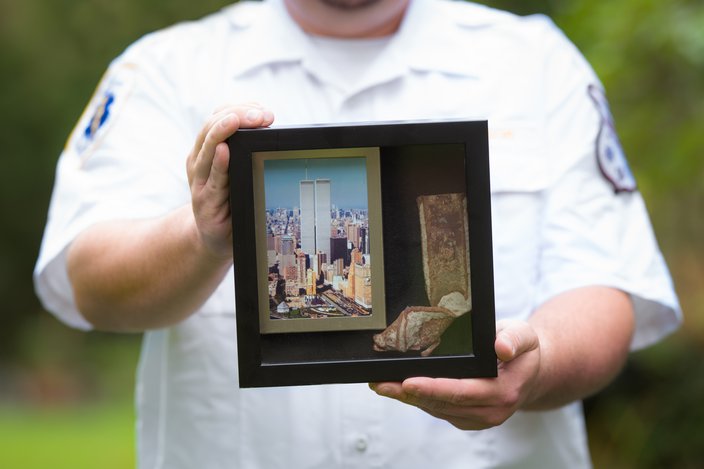 Scott Coppolo displays a frame with a photo of the Twin Towers and a twisted piece of metal from the wreckage of the towers.

Today, Coppolo is 39 and married with three kids. While he's unlikely to attend any 9/11 anniversary memorials this year – he never really has – he admits that terrorist attacks on New York City changed him as a person and as a paramedic. For years he watched fellow first responders develop respiratory illnesses and cancer and he worried.

But the calls kept coming and he continued to respond.

Like many in his field, Coppolo also has found a way to use humor to cope with daily tragedies he witnesses. He's a guy who genuinely laughs a lot. And he's humble. He tends to change the subject if someone spends too much time thanking him for his service, an occurrence that reached an apex after 9/11 and is spiking again during the COVID-19 pandemic.

"It's just my job," he says. "We are either born with it or learn it. You focus on getting the job done."

But even the most hardened EMT is put to the test when the job unexpectedly becomes personal.

Coppolo was among the first responders called to the scene of a small plane crash near Wayne, Passaic County, on a densely foggy night in January 2007. He arrived and quickly discovered the pilot was his father, Andrew.

The elder Coppolo was just 55 years old at the time. He had flown helicopters for the New Jersey National Guard, taught flying lessons and volunteered his plane to transport cancer patients as part of Angels Flight Northeast. Andrew Coppolo was alone in his plane when it crashed. He was returning from North Carolina and shortly before the crash had been cleared to land by the controllers at Essex County Airport.

"It was tough because I had to deal with it professionally," Coppolo says of working at the crash scene. "Seeing him like that was not as bad as the fact that I lost him."

Today, he thinks of each of these experiences as a layer, he says. "After layers and layers, they get covered up."

Coppolo was forced to take some time off after his father died, even though he wanted nothing more than to get back to work.

The day he returned the emotional weight he was carrying around became too heavy, and he broke down and cried. He cried and cried. It was a necessary and healing cry. He was crying for a lot of things. And he was learning, once again, how to cope.

He's even getting better at recognizing symptoms of PTSD, like when he gets angrier than he should because Dunkin' Donuts messes up his coffee order. He laughs about it, and he's a guy who can laugh at himself.

It makes you wonder if seeing so much tragedy in one lifetime can remind a person of the importance of the day to day, which can so easily be overlooked.

In 2005, Coppolo volunteered to help in New Orleans days after Hurricane Katrina had flooded the city. The lessons he learned about emergency response during 9/11 provided some stability in a city that felt like it was broken, he says.

The same for his work in the aftermath of Hurricane Irene in 2011 and Hurricane Sandy in 2012. Coppolo was on the front lines of the emergency responses, unraveling the lessons he accumulated over the years. It was another way to cope – to take tragic experiences and make something useful of them. He was saving people and himself along the way.

The instinct to impart these lessons onto a next generation of emergency responders is something Coppolo spends a lot of time thinking about these days, too.

Rather than dwelling on the horrors he saw, he reminds himself of the men and women who bravely navigated search and rescue in the debris of the fallen Twin Towers, people who became mentors to him. He says he wants to be the same to new recruits coming up. He seems to understand them because he sees himself in them.

His calling to become an EMT came a couple years before he would find himself standing in Jersey City looking at the ruins of the World Trade Center towers. A classmate was having a seizure and Coppolo sprung into action, calling upon his lifeguard training.

While the school nurse panicked, Coppolo says he stayed calm and made the student comfortable with a jacket under his head until an ambulance arrived: "They said I did a pretty good job. They told me I should volunteer for them."

That same day he drove to pick up an application to do just that.

Fortunately, the mental health services available to first responders have greatly improved in the past few years.

"There was nothing mandated (after 9/11)," Coppolo says. "Now, it's, 'You're going to talk to someone right now.'" Therapy is mandatory as first responders are called to face some of the most challenging events of our time – like terrorist attacks, school shootings and COVID-19.

The first time he had a child die on one his calls, he quickly realized it wasn't a topic he could discuss with his family. "It's easier to talk to people in the field," he says. But he still doesn't talk about 9/11. 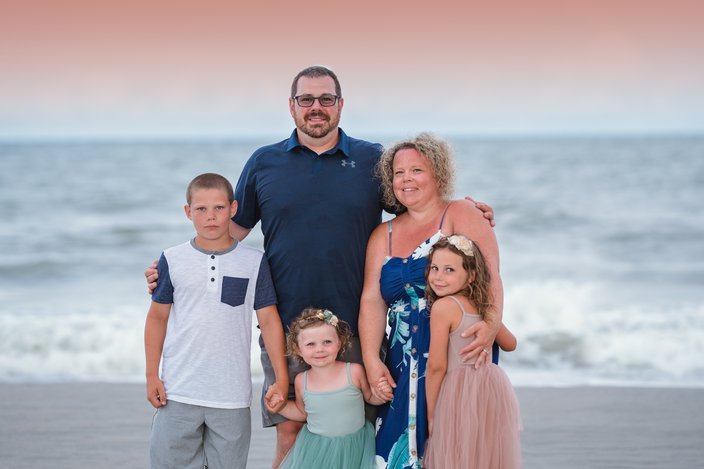 Scott Coppolo and his wife Dawn are pictured above with their children.

His own children didn't even know their dad been a first responder on 9/11 until recently when they were learning about it in school, and his wife, Dawn, told them.

As Coppolo and his co-workers are still reeling from the New York metro area being the early epicenter of the coronavirus pandemic – two of his fellow EMTs died – the calls have never really stopped coming. On Wednesday night, for example, he responded to a woman in labor – the baby came so quickly police officers delivered it.

He also spends a lot of time having fun with his family. In a recent photo on his Facebook page, the burly first responder, chest out, proudly wears a Star Wars T-shirt, featuring a Han Solo decal that's reminiscent of the old iron-ons from the 1970s. The shirt has a quote from Solo from the movie, which is also appropriate for Coppolo: "Sometimes I amaze even myself."

"I try not to think about it all too much," Coppolo says. As his Dad told him, "You need to do your job."

If you're experiencing symptoms of PTSD, depression, anxiety or suicidal feelings, please call the National Suicide Prevention Lifeline at (800)-273-8255.