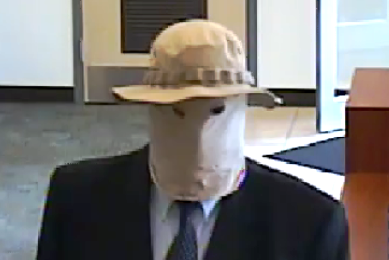 A man who authorities believe to be a serial bank robber known as the "Straw Hat Bandit" struck again Saturday in Montgomery County.

The Federal Bureau of Investigation and Montgomery Township Police Department said the incident occurred around 10:10 a.m. at a PNC Bank located at 1216 Welsh Road in North Wales.

The suspect entered the bank wearing a tan hat and a mask with eyeholes cut out to hide his face. Brandishing a black semi-automatic handgun, the man ordered customers to the ground and demanded money from bank employees. After receiving an undisclosed amount of cash, the suspect fled the area on foot.

The FBI believe the suspect is also responsible for 10 other bank robberies in Montgomery and Bucks Counties:

• September 28, 2012 at the First Federal Bank located at 803 Park Avenue in Wrightstown

• January 2, 2014 at the First Priority Bank located at 10 Sentry Parkway in Blue Bell

The suspect is described as a white man in his 50's between 6-foot and 6-foot-2-inch tall with a muscular or stocky build.

PNC Bank is offering a $10,000 reward for information leading to the arrest and conviction of the suspect.