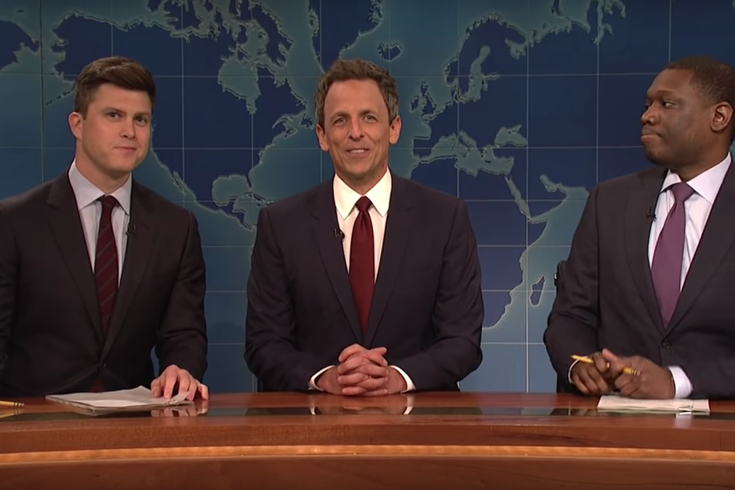 Seth Meyers returned to 'SNL' after five years to host the Oct. 13 show.

Former 'Saturday Night Live' head writer and cast member Seth Meyers returned to the show for the first time since his departure in 2014 this week to host alongside musical guest Paul Simon and fans were expecting a few more surprises than they got.

Meyers, a cast member since 2001, was on the show with cast mates Amy Poehler, Tina Fey, Fred Armisen, Andy Samberg and Bill Hader, who all contributed to his most successful bit 'Weekend Update,' which he joined in the 2006 season alongside Amy Poehler.

So during his host performance, it was a no-brainer that Meyers would join current anchors Colin Jost and Michael Che behind the desk for his famed 'Really?!?' segment during the Oct. 13 show.

But, according to social media, fans were disappointed that there wasn't a single cameo appearance from any of Meyers' former cast mates — especially Bill Hader, who played the singular Stefon character on the show with Meyers.

Stefon and Meyers, AKA the hottest couple of 'SNL,' is one of the most iconic bits from the show's recent years. The nightlife correspondent had been hitting on Meyers for years and the last we've seen of them was five years ago when they got married.

#SNL Finally @sethmeyers is back!!!! Only thing that could make this even better is Stefon making an appearance pic.twitter.com/eYrKtLmNJz

You mean to tell me that I watched the entire @sethmeyers on @nbcsnl and Stefon didn’t make an appearance? #SNL #sethonsnl

But on the bright side, Meyers did appear in a ton of sketches during the episode. And his monologue was basically just a bunch of stuff from behind the scenes of his time on the show, so super fans will be pleased.