The Sisterhood of the Mellowing Plants 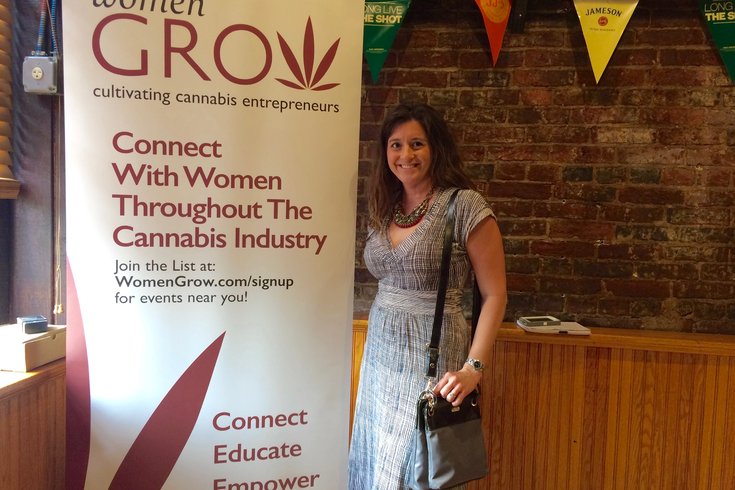 Stephanie Thomas, chairwoman of the Philadelphia Chapter of Women Grow, a national organization of women interested in the growing cannabis industry, smiles while displaying a purse from Annabis, a New Jersey-based business that makes accessories that conceal the scent of cannabis.

About 40 women sat together Thursday evening in an upstairs room of Cavanaugh's Headhouse, a bar near 2nd and Lombard streets in Society Hill, gathered around sharing stories, snacking on cheese and sipping wine.

And talked about weed.

Medical marijuana, specifically, which was recently legalized in Pennsylvania, was the focus of the monthly gathering of the Philadelphia chapter of Women Grow.

According to Stephanie Thomas, chairwoman of the local chapter, women – and men, too – are drawn to its events to learn how they might stake a claim in what might be the modern gold rush as the market for marijuana is just establishing a foothold here.

Local meetings of the organization introduce women to marijuana as a business and teaches how the product can be cultured, grown, harvested and sold.

The national organization, founded in 2014 in Denver, says it is now the largest network of cannabis industry professionals, claiming its members are about 70 percent women and 30 percent men, a ratio that seemed reflected in Thursday night's attendance. Its goal is to start more than 1,000 women-owned marijuana-related businesses.

Thomas said a stigma still surrounds marijuana due to the decades-long prohibition on the plant, but the industry is slowly getting over it as marijuana legalization efforts expand across the country.

Twenty-one states, including Pennsylvania, New Jersey and Delaware, have legalized medical marijuana. Four states – Alaska, Colorado, Oregon, Washington – and the District of Columbia have also legalized recreational use of marijuana.

"People will be nervous to talk because they might not be ready to talk about the industry in case their current employers find out," she said.

As an industry, women are making a strong impression on marijuana. According to CNN, women account for 37 percent of all executives in the legal and medical marijuana industry, surpassing the 22 percent figure for women in executive roles in all other industries.

"There's a lot of curiosity out there," Thomas said. "It's exciting to see all the interest ... [There are] so many people coming out of the woodwork."

'IT'S GOING TO HAPPEN'

Danielle of Bryn Mawr, an attendee who proudly said she'd spent "years in the industry," said women can secure a foothold in the growing industry if enough of them get involved.

"It's all about getting involved as this starts to get going," she said. (Like the other women in attendance, Danielle spoke on condition of withholding her last name and refused to discuss specifics of her experience with marijuana because it is still illegal in Pennsylvania as a recreational drug.)

Danielle compared the current state of the marijuana industry to that of the internet in the early '90s, as cannabis slowly inches its way to market and increased profitability as society begins to accept and embrace it.

"There's lots of room for ancillary [cannabis] businesses. This could really be dominated by women. We've just got to get in there and do it." – Stephanie Thomas, chairwoman, Philly chapter of WomenGrow

"I'm just dying to know when they will finally legalize it," she noted. "It fascinates me that there's such a big stigma on it."

According to Brian Staffa, a cannabis production expert and featured speaker at Thursday's meeting, the industry is on the cusp of something big.

He said that events like those held by Women Grow allow individuals to learn about the fledgling industry and potentially get in on the bottom floor of a business that could be booming in "5 to 10 years" if marijuana is fully legalized.

"As this gets going, you're going to see more and more professionals transitioning in," he said. "It's just change; some people are going to fight it, others are going to jump on. But, it's going to happen."

Staffa, a Rowan University graduate and director of production for the Compassionate Sciences Alternative Treatment Center in Bellmawr in Camden County, shared information about marijuana growth cycles, cloning the plant, the right types of greenhouse lights and how to run a large growth operation with cutting room, grow space and a "mother stock" of the plants clones are grown from.

But, there's more room in the industry for businesses other that marijuana production.

Ancillary industries, Thomas said, are popping up as marijuana legalization expands across the country. Members of Women Grow, she said, include individuals that produce everything from things typically considered marijuana paraphernalia – like glass pipes – to clothing companies.

"There's lots of room for ancillary businesses," she said. "This could really be dominated by women. We've just got to get in there and do it."

Thomas pointed to one woman-owned company, Annabis, a New Jersey-based company, that makes fashionable purses and accessories that, well, you can hide weed in – safely. Its products feature secret, aroma-controlling compartments for keeping one's stash.

Jeanine Moss, CEO and founder of Annabis, said that she got the idea for her company after spending more than 30 years doing marketing for large corporations and nonprofits. But, as a user of cannabis, she said, she was tired of not having a stylish accessory for her and her friends to carry their weed.

"We were all pulling baggies out of our purses every time we wanted to have a social cannabis experience," she said. "That just didn't go with our style."

Moss said other women in Women Grow helped her start her business in 2014 by sharing their knowledge about the market for cannabis-related products.

"This is a really great thing," she said. "We are very cognizant of the barriers faced by other women ... I want to see other women in executive roles."

As a member of the baby-boomer generation, Moss said that she "had to fight hard to do well," but now she's excited to see women able to enter this new industry as leaders, instead of having to try and prove their worth before being accepted in the workplace, as women have had to in the past in other industries.

"We want to include men, but we want parity. We want fairness," she said. "We are in the middle of a culture shift ... and, I think, this is our first shot."

If Moss is confident about women making a mark on this industry, others aren't so sure.

Two young women in attendance Thursday said they were attending to learn about possible job opportunities in the – pardon the pun – blossoming field of marijuana production.

But, taking notice of several men at the meeting, they said they worry that if women don't step up now, the fledgling industry might be dominated by men.

"You want to think things will change. But, look around, will it?" asked Jordan, from Northern Liberties.

"This is definitely progress," interrupted her friend, Jamie from South Philly.

"Well, I'd love to see it as a woman-dominated industry," Jordan continued. "If women could dominate this field, that would be like heaven."