Who brings the skills the Sixers need the most: Doc Rivers, Mike D'Antoni or Tyronn Lue? 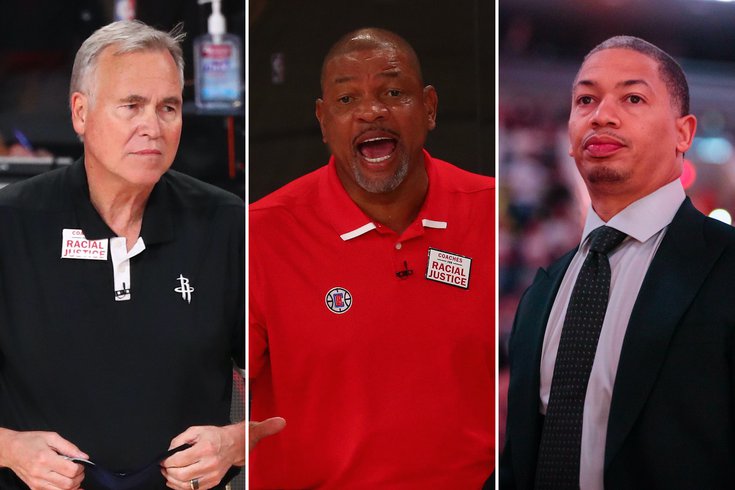 The Sixers' head coaching search appears to be nearing a conclusion, and unless another surprise candidate parts ways with the Los Angeles Clippers falls out of the sky, there are only three possibilities for Brett Brown's replacement: Doc Rivers, Mike D'Antoni, or Tyronn Lue.

While we've written about the coaching search and each candidate extensively at PhillyVoice, to date we have shied away from comparing them head-to-head. So before the club ultimately makes a decision, I thought we'd go through the qualities the team is looking for and assess what each guy does or does not bring to the table.

Before we start this exercise, some notes — these rankings are based on a future where you are trying to build the best team without moving one of Joel Embiid or Ben Simmons. This is a Sixers-specific exercise, not a reflection of my feelings on how they'd work for any of the league's 30 teams. These are not opinions based on what I think is going to happen or what I've been told by people in the know, rather a big-picture view of these three from following the league and knowing the team they'll be inheriting. And lastly, ranking last in any of these categories is not me claiming any of the three are actually bad at something, just behind their competitors.

This was probably the hardest category to rank, which is why I have it first. None of these guys are bad leaders, per se, but leadership comes in all forms and doesn't work the same for all people.

The only reason I didn't put Lue first in this category is because of a lack of experience/lack of exposure outside of the LeBron James machine. As I've written on several occasions, Lue took the league's biggest star to task throughout his tenure in Cleveland and managed to command respect while juggling a James/Irving partnership that was clearly more fraught than people realized at the time. He has cache as an ex-player, all stepover-related jokes aside, and he's not afraid to challenge anyone.

So why Rivers, particularly after the Clippers' flameout this season and the discord of the Lob City teams? He just has a different level of cache/gravitas. He is widely respected around the league by former players and career opponents alike, speaking in measured terms while never being afraid to push back and prod when it matters. Thrust into crisis mode during his first year with the Clippers as a result of the Donald Sterling fiasco, Rivers led the franchise forward with dignity.

Those qualities count for this organization in much more than the huddle. The Sixers are in need of someone who can bring sanity and stability to the operation, and Rivers has the goods.

I think this is a closer battle between Lue and D'Antoni than many would think. Once again, this is about volume as much as anything. D'Antoni has a lengthy track record of optimizing offensive talent, including offensive talent that didn't look like it had another level to go to.

Steve Nash was an All-Star before Mike D'Antoni and an MVP/all-time great after him. James Harden was an offensive machine before D'Antoni and an even more ruthless one after him. Bad as his Knicks tenure may have been, D'Antoni was the guy who helped foster "Linsanity," a wonderful story that unfortunately tailed off after the return of Carmelo Anthony (and D'Antoni's midseason resignation) that season. On a team that needs help offensively, D'Antoni probably offers the most help right away.

Rivers sits third here pretty comfortably for me, in spite of good regular season results and a fairly strong package of dead-ball plays. When it comes to drawing up something late in a game, I actually have a ton of respect for Rivers. I'm a little less bullish on broad scheme stuff — the defensive concepts he used successfully in Boston were heavily influenced by Tom Thibodeau, and those have fallen out of favor as the league evolved over the last decade. His Clippers team didn't have much of an identity or a plan in the playoffs this season, and a lot of that falls on him.

(There are defensive concerns for Lue as well. The Cavs were second-to-last in defensive efficiency in 2018, his last full season there, and they played an aggressive defensive scheme that probably would not be feasible with this Sixers group. Too soon to tell if he's married to that.)

This is a category where I think Lue is the winner going away, mostly because he's the guy who is actually willing to make sweeping changes at a moment's notice. During Cleveland's time at the top of the Eastern Conference, the Cavs consistently made switches during the playoffs that made an impact.

The 2018 Cavs were a great example of this. Kevin Love was the starter at center for much of the year, including in the team's Round 2 defeat of the Toronto Raptors. That was the case in Game 1 of the Eastern Conference Finals against Boston, right up until Al Horford came out and set the tone for Boston early. Instead of waiting or hoping for the matchup to normalize, Tristan Thompson started the second half at center and kept that spot the rest of the series. It didn't make a difference in the result of Game 1, but the Cavs would prevail in part because of quick changes like that from Lue.

Neither D'Antoni or Rivers is known for doing the same. Rivers sticking with "his guys" and holding onto past beliefs in spite of growing evidence is the way he's most like departed Sixers coach Brett Brown. D'Antoni, on the other hand, is the guy most married to a system and general style of play, though he did shift the offensive style in Houston to feature a lot more isolation than he tends to prefer.

We'll see if this holds up, but Lue was not the guy pulling the strings and calling the shots in the front office in Cleveland. Rivers has already been basketball ops leader in title and authority, and with Philadelphia's front office situation in flux, we'll see if he's able to secure some managerial power if he takes the job.

D'Antoni doesn't strike me as a guy who wants to run the show, but again, his marriage to a style of play often has the consequence of guiding the front office's hand.

Fit with Embiid and Simmons

Rivers' practical experience with players like Kevin Garnett, DeAndre Jordan, Blake Griffin, and Rajon Rondo is a great starting point for someone who needs to unlock Embiid and Simmons offensively. His arrival also doesn't signal any favoritism or spell doom for a style of play that either guy prefers. There is room in Rivers' world for slowing it down, pushing the pace, or whatever the moment demands, and his general belief is that individual problems warrant individual solutions.

While there's a misconception that Tyronn Lue would represent "a Klutch hire" (he's not represented by Klutch at all, in fact), he does have the distinction of being LeBron's preferred coach, the guy they originally tried to lure to the Lakers before Lue backed out due to compensation. I don't think that necessarily means anything, but with the relationship between Simmons and LeBron being what it is, you would have to wonder about how he would receive Lue being hired.

D'Antoni is another matter entirely. Reports have suggested he may indeed be on board for the MDA experience, but the veteran coach is against post-ups and players who thrive with them as a matter of general principle. We've never seen D'Antoni even interested in working with that sort of player. He is a creative enough offensive mind to make something out of this group, but he is not a plug-and-play option by any stretch of the imagination.

If you're asking me, I think Lue offers the best blend of qualities they need in a person and a tactician to move this team forward. I think he would use a healthy amount of experimentation in the regular season, refuse to back down in the face of big personalities, and make fearless changes when they matter if he thought it would help the team win. Sprinkle in that he might have the least interest in getting involved with front office shenanigans, and you have a strong candidate. However, he does appear to be the least likely option at this stage of the game.

Lue would not come without risk. He has the shortest track record of all three and the good fortune of being part of the LeBron machine. But there are different sorts of risk baked into any of these hires. Are you willing to risk MDA alienating Embiid? Are you willing to live with Rivers' high floor and low comparative upside, given his track record of face-planting in big moments? Another person might be more willing to buy into the MDA offensive rejuvenation dream than I am.

But at the end of the day, I think all three of these guys are good coaches who represent a meaningful upgrade over Brown in one form or another. For all the bluster about how they should have fired Brown a long time ago, the timing actually turns out to have been a blessing for Philadelphia. Rarely will a set of candidates with qualifications as good as this trio become available at the same time.

There isn't a "wrong" choice, even if they all represent something different for the future of the organization.