Kings 114, Sixers 110: Despite loss, Okafor holds own against Cousins 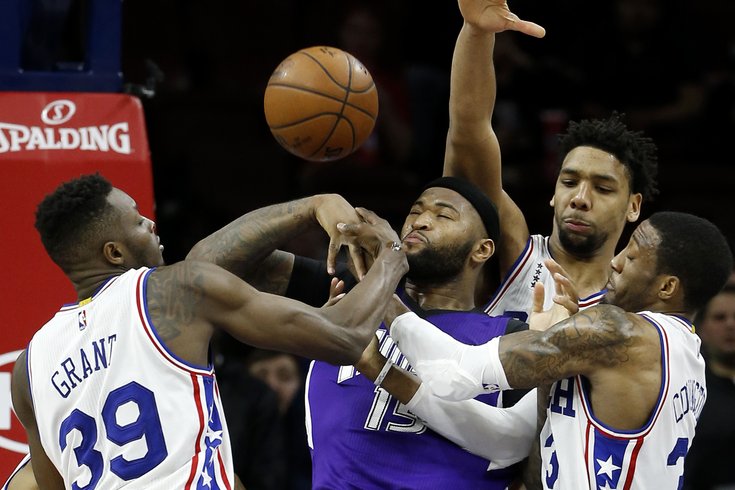 Things appeared to be shaping up nicely for the Philadelphia 76ers on Wednesday night.

Their opponent, the Sacramento Kings, have been nothing short of a dumpster fire recently, losing four straight and eight of their last nine coming into play. A few days ago it looked like their coach, George Karl, was on his way out, only to get an endorsement from GM Vlade Divac on Tuesday.

And as the Sixers opened a 17-point lead in the third quarter, it appeared as though the home team would be completing the season sweep of Sacramento. Their threes were dropping. They were protecting the ball. And the Kings looked listless, to say the least.

Then, the fourth quarter happened.

After committing just 10 turnovers through the first three quarters, the Sixers (8-45) turned it over nine times in the game's final 12 minutes and were outscored by 16 points as the Kings stormed back to pick up the 114-110 win.

Here are some observations from the team's final game before the All-Star break.

•   Against one of the more physical big men in the league -- Kings power forward DeMarcus Cousins -- rookie Jahlil Okafor more than held his own. He finished with 26 points, 10 rebounds, 5 assists, and two blocks. And although he turned the ball over six times, Okafor didn't seem afraid to take it right at Cousins.

"I think that Jahlil is young and is going to have to learn to battle against guys like that," coach Brett Brown said after the game. "I thought he was good a lot of the game, especially in those extended minutes with Noel being a late scratch."

The problem, however, was that those extended minutes forced Okafor to play 39 minutes, tying a season high, and his fatigue began to show late in the game. There were a few mishandled passes and some sloppy ball handling by the rookie, including one play in which Okafor pumped, and when he brought the ball back down, Boogie Cousins ripped it right out of his hands. Furthermore, several of Okafor's second-half turnovers led to points for the Kings.

Cousins finished with 28 points on 8-of-18 shooting and 12-of-17 from the free throw line. He also added 12 rebounds and five assists.

•    Robert Covington led all scorers and set a new career high in points and three-pointers. He scored 29 points on 9-of-16 shooting, including 7-of-11 from three. Unfortunately for the small forward, he turned the ball over even more than Okafor (seven times). He did, however, more than made up for that with his hot shooting and six (!) steals.

•    Nerlens Noel was a late scratch for the Sixers. Originally listed in his typical starting power forward position, the team decided to rest Noel (right knee tendonitis) just a few minutes before opening tip against the Kings. Jerami Grant started in his place.

After the game, Brown said that he didn't know enough to comment on the extent of Noel's injury, but he did say that he expects his forward to miss this weekend's Rising Star Challenge. He also wouldn't give a timetable as to when Noel could return.

•    Grant played well -- as has been the case of late -- against a formidable frontcourt that features Cousins and rookie Willie Cauley-Stein. He had three blocks in the first quarter alone and was plus-14, while the next closest Sixers player was plus-three.

Go ahead and have yourself a block party, @JeramiGrant!https://t.co/dy4JhZpYHe

And although he finished with just 7 points, he added some fireworks on offense as well.

Late in the fourth quarter, however, Grant left the game and headed to the locker room with what turned out to be a hip strain. And while that's certainly good news for him going forward, his absence certainly hurt the team down the stretch.

Grant final line looked like this: 7 points, 6 rebounds, 6 assists and four blocks to go with a plus-11 in 28 minutes. Meanwhile, Richaun Holmes recorded four blocks of his own in just 15 minutes.

•    Meek Mill was in the house, but he was far from the biggest star in attendance. That's because Allen Iverson was also on hand. The Answer received a standing ovation, as you might expect, when he was introduced by the team. And as he walked off the court and passed the Kings bench, he stopped to give a big hug to Caron Butler before disappearing for the rest of the night.

•    Boy, did George Karl dodge a bullet. After it was reported earlier this week that Sacramento would part ways with Karl once they hit the break, Kings GM Vlade Divac said Tuesday that the coach's job was safe -- at least for the time being. And for most of the game, it seemed like he was going to fall to 0-2 against the NBA's worst team.

As Rich Hofmann wrote last week, teams have not responded well to losing to the last-place Sixers -- and firing a coach is certainly not out of the question. Divac was in attendance Wednesday night, and you can't help but wonder if the game gone differently -- they were in danger of losing their fifth-straight and their ninth in 10 games -- would that have changed his mind about Karl's future with the team.

•    Sauce Castillo nearly got a bit of revenge against his former team. Stauskas finished with 16 points ... as well as this buzzer-beater to close out the first half and put the Sixers up 15 heading into the break.

•    Stauskas, along with Robert Covington, highlighted a strong outside shooting night for the Sixers. They played a large role in the Sixers building a 17-point lead in the third quarter and combined to go 11-for-16 from three. They led the way for the home team, who shot 44.1 percent from deep and 46.2 percent overall from the outside.

The Sixers will now get the next week off as they head into the break -- and the NBA trade deadline. For some members of the team, Wednesday night's loss to the Kings may very well have been their last in Philadelphia. Their first game after the break will come next Friday (Feb. 19) in New Orleans, where they'll face the Pelicans at Smoothie King Center at 8 p.m. They'll then travel to Dallas to take on the Mavericks that Sunday before finally returning home on Tuesday, Feb. 23 when they host the Orlando Magic.