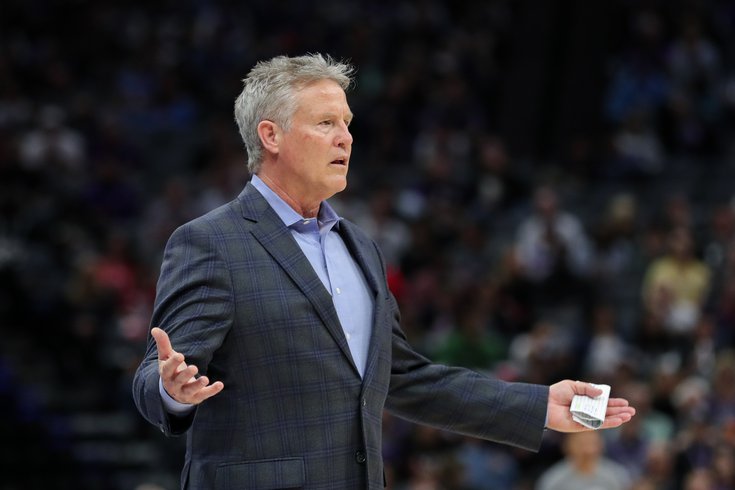 It's a unique Memorial Day Weekend for all of us in the middle of a pandemic, so you might as well have something to read during it. No better time than now for another Sixers mailbag, months removed from the last time the Sixers actually did anything on a basketball court. Not surprisingly, some of the only pressing questions people still have are about head coach Brett Brown.

As always, if you have any additional questions, feel free to reach out on Twitter, shoot me an email, or find another way to get your message through to me, and it'll get taken into consideration along with the rest.

Is it finals or bust for Brett Brown?

I don't think I would go this far, but I don't think it's far removed from the truth. As I've said on multiple platforms over the past two months, I think Brett Brown needs the season to return more than anybody else with the team. His only realistic path toward being the head coach again next season is leading the Sixers on a deep playoff run that shows the growth and progress they need to year-to-year.

A Finals run is certainly the ideal scenario for Brown, in that it would represent a significant step forward and on some level a reflection of things outside his control, e.g. a team "built for the playoffs" saving an extra gear for when the games matter more. I don't think that's an acceptable excuse for their performance this season regardless, but internally and externally it would be evidence that they were better than everyone thought during a tumultuous regular season.

It all depends on the context. If the Sixers end up in the Eastern Conference Finals and lose a seven-game dogfight to the Milwaukee Bucks, and Brown makes adjustments and lineup tweaks that help get them to that point, are they going to part ways with him? That's a hypothetical I discussed on a smaller scale last season when many insisted his job hinged on making it to the Eastern Conference Finals at a minimum. As we all know, that ended up not being the case, with Brown earning a wave of public endorsements from his players during exit interviews last season.

The difference now is that public sentiment, by my estimation, has shifted in a big way from the end of last season to now. A sizable group of skeptics questioned Brown's fitness for the job for years, and that group has only grown in numbers during a disappointing 2019-20 season. For a beleaguered front office and ownership group, selling the fanbase on simply needing a new voice feels like the simplest, and perhaps even correct route to take if they don't deliver the necessary results.

I don't think, by the way, that Brown would be in a position to get anywhere near the same protection from his roster as in years past. The history isn't there with this group and cracks have shown throughout the year. Al Horford has grumbled about his role, and Ben Simmons didn't just ignore a public request for more threes from the head coach, his loved ones not-so-slyly hinted in a national story that he craved more accountability. Joel Embiid's fondness for the head coach and their history together matters, but that will only carry Brown so far.

I'm not predicting hirings or firings of anybody months away from the season even restarting. But the seat is hot.

Which Sixer would make it the furthest on the #HoleyMoley extreme minigolf course?

Great question. Mini golf is decidedly a dad sport/actitivity, so we have to look at the group of players who have kids. This includes (as far as I'm aware of, anyway):

By my estimation, Horford is the apex dad on the team. How do I know this? O'Quinn recently told Sixers.com's Brian Seltzer that he has gone to Horford for parenting advice.

"He's super involved with his family and his kids love him to pieces," O'Quinn said. "I had to ask him some questions that he had to give me straight answers."

By virtue of winning the dad off, Horford opens as the -200 favorite on my board. We only take cash bets, for the record.

Not a fan. Even when Chuck Taylors and skater shoes became "a thing" again when I was roughly in middle school, I never understood the fascination with them. Trying to replicate that is not my idea of a good sneaker look, though opinions will vary.

What are the chances the Sixers receive the Thunder first round pick this year with an alternated version of the season likely to resume in a few months?

This is going to hinge on too many factors to think about for a single mailbag question, so let's just zoom in on the Thunder. What does their schedule look like, and what will their motivation be if more regular-season games are played?

Let's say the magic number is 70, with teams clearing that bar in large part to guarantee regional sports network money around the league. 64 games into their season, that would leave Oklahoma City with six games to play to decide their draft fate. This is what their slate would look like, assuming the NBA doesn't alter matchups upon resuming the season:

Three of those teams (Minnesota, Washington, Atlanta) would have nothing to play for, unless you believe the Wizards outside shot at a playoff berth would motivate them. They sit 5.5 back of Orlando as it stands, so that seems farfetched. That leaves three meetings with playoff teams of varying stakes, though some of the juice will be taken out of them as a result of the likely neutral-site relocation.

As one example, OKC is just a game back in the standings from Utah for homecourt in the first round, but there's not going to be any homecourt to fight for, which could weaken the fight in both teams for that game. It could be a player-to-player issue as well. Chris Paul, whose body betrayed him during the worst possible time in Houston's 2018 conference finals run, might be more liable to ease into things than teammate Shai Gilgeous-Alexander, or young players on an opponent like the Grizzlies.

This is sort of my issue with the whole idea of playing regular-season games, not that there's a great solution either way. My ideal outcome would be holding televised scrimmages between playoff teams as a pseudo preseason and leaving the season standings as is. The NBA loves selling "Finals preview!" and "playoff preview!" games as it is, and they could turn this into a multi-week event ramping up to the actual playoffs, giving fans an appetizer without bringing teams back who have nothing left to play for.

Money talks though, so I expect some bullshit July games that everyone will embrace at first and quickly groan at. And to answer the original question, that means it will be a crapshoot. They'll probably sweat that pick out until the last moment.

Just a comment, not a question: the DH is horrible for baseball, and adding it to the NL for a shortened season this year is a slippery slope.

My editor had to chime in on this topic so let's just set the record straight — resistance to the designated hitter rule drives me insane. The arguments are always some nonsense about additional strategy or tradition or some other nonsense to justify the National League staying in the stone age. Hogwash, all of it. Do you know what I tune into sports to see? The best players in the world doing what they do best. Do you know what I don't tune into sports to see? Pitchers who suck ass at hitting wasting my time in the first six innings of games.

Sure, they come up with the occasional hit and every so often by some miracle a pitcher comes up with a huge moment, as Joe Blanton did when he hit his signature home run in the 2008 World Series. But those moments are too few and far between to justify watching a bunch of specialists fail spectacularly over and over again. The last pitcher to hit a World Series home run before Blanton did so in 1974. I'm not inclined to sit through 34 years of sport-wide slop, entire summers of wasted time, to hope for another one of those moments.

If a real batter is in that spot instead, teams still have to be strategic about pitching changes and righty-lefty matchups, and the world will keep spinning. You want to watch people swing and miss repeatedly, go to any popular Philadelphia bar on a weekend evening.

What number should Chris Paul wear for the Sixers next season

There's a great backstory behind this one. Paul was tight with his grandfather growing up, and after his tragic passing in 2002, Paul decided to pay tribute to him by scoring a point for every year of his life in the next game he played.

Since No. 3 is retired and spoken for in Philly, Paul could do worse than bringing back the tribute. Unless he wants to talk to The Answer about borrowing it for a little bit. But I don't think Mr. Paul is going anywhere.