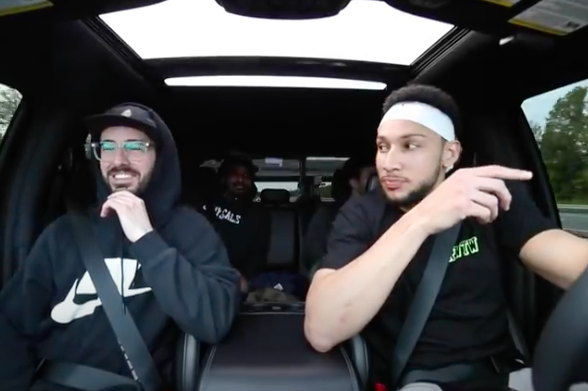 Philadelphia 76ers star Ben Simmons went on a fishing trip during the NBA's suspended season, sharing highlights of the day in a YouTube video. The Sixers and the rest of the league hope to return in the summer.

Momentum is building for a possible return of the NBA season in July, but Philadelphia 76ers star Ben Simmons hasn't wasted his time off during the COVID-19 crisis.

The two-time All-Star has launched a COVID-19 fundraiser, played pranks on his mom, released a new sneaker and recovered from the back injury that hurt so badly it made him puke.

Simmons, 23, posted a video on YouTube this week of a road trip he took with several friends to an apparent lake or marshland, though it's not clear exactly where they were.

The trip starts on a high note with Simmons at the wheel making a series of "blub blub blub" fish noises. For a guy who's intensely stoic on the basketball court, he's also evidently a goof.

"The one thing I notice about driving in America," Simmons muses, "people don't get over in the fast lane. They're like ... going slow. They're not getting it. It's like, if you're not overtaking, go in this line. Go in the right lane, please. But if you're a speed demon like me, then get in the left!"

At various points, Simmons claims to have caught alligators while in college at LSU, pretends to be struggling to reel in a fish, and nearly bumbles into the dirt. At least his back looks solid again.

The entire group failed to catch any fish during the trip.

"It was dead," Simmons said.

With any luck, we may soon see a safe return of the NBA and Simmons back on the court with his teammates. For now, little diversions like this are a fun way for athletes to stay connected with fans.