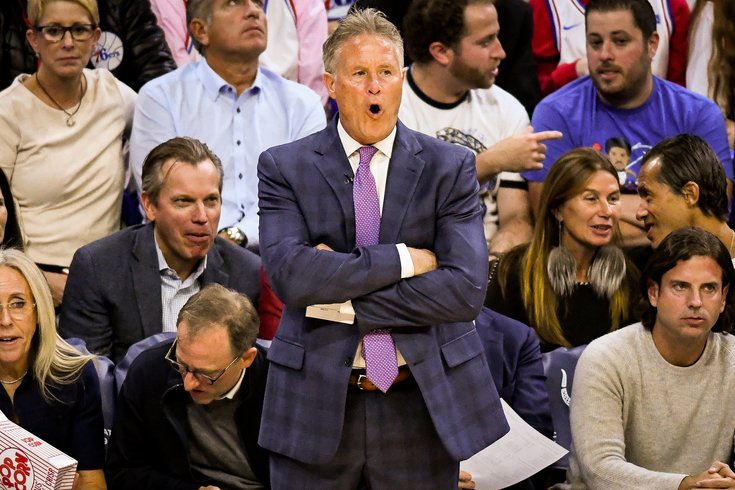 Just over two months into the pandemic, Sixers head coach Brett Brown sounds like he did before it started. Road woes, roster fit, and various other issues aside, his vision remains on competing for a championship behind the Ben Simmons/Joel Embiid duo, excuses and mitigating circumstances be damned.

In an hour-long Zoom call with reporters on Friday afternoon — many of whom, myself included, desperately need to see a barber — Brown was asked about a variety of topics, from the team's behind-the-scenes prep to his own future to the state of his best players. What follows below are the finer points, leaving out less important topics like his crockpot recipes, quarantine reading material, and other non-essential information.

Reflecting on his future

No one in the Sixers' organization stands to lose more than Brett Brown (save for ownership) if the 2019-20 season is cancelled and the team can't prove their worth in the playoffs. At this point, the most realistic way for Brown to keep his job is for the team to make the deep playoff run people expected before the season and prove all the regular season hemming and hawing isn't that important.

So yes, that's a thing Brown has had to weigh while carrying on planning and prepping his guys for a season everyone hopes will resume at some point.

"I wouldn't say you think about it to the point that it weighs you down, but I get it, I've been doing this for a long time," Brown said. "This thing is, for me, so incomplete. We had our starters 19 out of 65 games. I think this team was built for the playoffs...we get we needed to be better on the road, we weren't, we were dominant at home. Somewhere in the middle, I felt everything was pointing to us landing the plane, getting good health, and letting that environment be judgment day."

"I've been with you in this city for seven years. We've gone through naviculars, pandemics, and five GMs and 100 whatever players, and here we are. I feel it's incomplete, we need to be able to come back to the table, take the team that we have, the work we've been putting in, and let that be judgment day. Let that environment be, you know, you-did-or-you-didn't type stuff."

Like many around the world, job security is not promised to Brown during the pandemic, and that has not stopped him from trying to lead the team in various ways. There are Zoom calls with his players, checking in with Kyle O'Quinn and his children or with one of his internationally born players and how things are back home. He has weekly, hours-long calls with smaller groups on his coaching staff, bench staffers on Wednesdays and developmental staff on Thursdays, in an effort to build some sort of routine for the group.

And then there are the soul-searching moments, reflection on what their defense did and didn't do well, why the offense wasn't as good as it needs to be, all the way down to their success on after-timeout plays and out-of-bounds sets. Each member of the staff, from "defensive coordinator" Ime Udoka down through the development staff, they are reflecting and using it to prep for playoff opponents.

The mindset internally is to set everything aside and focus on what they can control. Brown has monitored the worldwide pandemic, from the herd mentality solution in Sweden to the contact tracing in South Korea, and still comes away thinking they have to focus on contending for a title.

"In order to not use any of this as an excuse, that is the message," Brown said. "When it's go time, we've got to go. We are hunting to still contend for a championship. That hasn't changed."

A gameplan and fitness base for Embiid

The health and fitness of Joel Embiid is no less pressing a matter now than it was before the world shut down, and the head coach is doing what he can to make sure Embiid knows that.

"I've had many conversations with Jo and spoke with him 30 minutes ago. He's got a real desire to be at a playing weight that equals his best since he's been in the league," Brown said. "With the restrictions everybody has, if you live in a home and you've got a yard, or a one-bedroom apartment and have to take those parameters into account, our medical staff and strength and conditioning staff have been all over that part of it."

Talk is cheap here, and Embiid has not been shy about the fact that he struggles to stay in optimal shape when he doesn't have the benefit of basketball games to play in. That's the sort of thing that feels like it can only be exacerbated by this lockdown, though the big fella has posted the odd Instagram story or two from the floor of a gym, letting everyone know he hasn't simply been resting on his laurels.

The differences in approach from player to player are important on the strength and conditioning side. Later in the call, Brown named specific examples from player to player — Ben Simmons being in a house vs. Matisse Thybulle being in an apartment/Tik Tok studio — as things the staff have to take into consideration as they guide the players along. There are restrictions on the equipment NBA teams are allowed to provide their players, with the league ruling certain equipment would constitute salary cap circumvention, but they've done their best to provide resistance bands, bikes, and other necessary items to keep guys healthy and safe.

That includes studying the past. Brown noted that post-lockout seasons traditionally have coincided with increased risk of injury, which has been part of the messaging to their guys throughout quarantine. The three-week ramp-up period that has been floated publicly is a number Brown says he is comfortable with as a mandatory minimum, though as with any coach, I'm sure he'd take more prep time if he could get it.

In the case of the big man, they've also envisioned a concrete gameplan for him when the league returns and (presumably) the playoffs begin.

"My ideal thing is I'd want to play him about 38 minutes," Brown said. "I really would. In a playoff situation as the head coach, that's my ideal number. In the regular season, you bring him along, and I think 30 was the number where he ended up...Joel is completely aware that kind of how he goes with his health and his fitness, we go."

There's obviously going to be peaks and valleys in minutes even during a playoff run, as last year's second-round defeat proved for Embiid. With Embiid dealing with nagging pain in the Brooklyn series, the team kept his minutes count low, aided by blowouts in Games 2 and 5 against the Nets. It was a different story against Toronto, with Embiid playing between 30-35 minutes most nights only to step up and play 45 in the pivotal Game 7 they lost at the buzzer. Stars need to provide more as the competition gets tougher.

Something that wasn't addressed on the call — how would 38 minutes for Embiid impact Horford, who was removed from the starting lineup prior to the pandemic? Brown noted that his favorite performance of the year was their home win over the Clippers, where they were able to effectively play some "big ball" with the Embiid/Horford frontcourt in spite of the lineup change. But something has to give here.

Lessons from 'The Last Dance'

Like the rest of the sports world, Brown has been glued to The Last Dance documentary series on Michael Jordan's legendary run with the Bulls. The takeaway that stood out to this writer? His assertion about what it shows a team needs from their best player.

"The notion that your best player has to grab stuff by the throat and lead," Brown said. "And it can be done a little bit by committee, but the weight of a lot of that, and I put my hand up as the head coach too, I like our guys seeing all of this stuff."

I wouldn't say that's a "shot" at anyone on the roster, but it's certainly a clear stance on who drives winning on an NBA team. And though Brown acknowledged that leadership takes different forms in the long-winded version of that answer — he did see Tim Duncan up close, after all — he views maniacal competitiveness as the baseline for success.

That doesn't stop with players who are currently on the roster. Brown said that although you need to factor in team needs, like shooting or defensive viability, The Last Dance has been a reminder that a trait to look for in the draft process is a player's competitive fire, and how that will set them up for development and success.

Ben Simmons was in how much pain, exactly?

Back injuries, for those who have never suffered one before, are both tricky to pin down and extraordinarily painful, issues that radiate throughout your body. When the Sixers provided initial updates on Ben Simmons' troublesome back months ago, medical experts made note of the fact that they weren't necessarily telling us about the underlying issue, rather the type of discomfort he was feeling.

About that discomfort — it appears to have been far worse than perhaps we were aware of.

"For those of you who remember [the game] in Milwaukee, that for me was as distributing a memory as it relates to a player as I can think of," Brown said. "He's lying on his back, he's vomiting primarily because of pain, and trying to get him back on the plane and build him back up to some level of health where he can play basketball again with us. That timeline was always an interesting one as a head coach."

Vomiting from back pain? I am in pain even thinking about that scenario (puking feels like it would amplify pain in your back, creating a vicious cycle) and it's the first we've heard of the severity in the moments after Simmons tweaked his back against the Bucks. If there is s silver lining from this hiatus, it's that Simmons was not forced to make any decisions about rushing back to play in a playoff game.

And Brown, like Brand before him, was thrilled about the approach Simmons has taken in quarantine, not using the pandemic as an excuse to half-ass his effort to get back to full strength. In possession of a medical pass to get into the facility in Camden to receive treatment, Brown says he has gone above and beyond to get his body right and prepare for a return.

Brett Brown's dog — out with a hamstring injury

Brown, who says he has the fittest dog in the Philadelphia area from walking it during the pandemic, revealed late in the call that his 16-year-old pooch recently pulled a hammy.

Not even the Sixers' veterinary staff can get their act together. Don't expect a reliable timeline on this one.