Which teams do Philly sports fans hate the most? A top 10 list 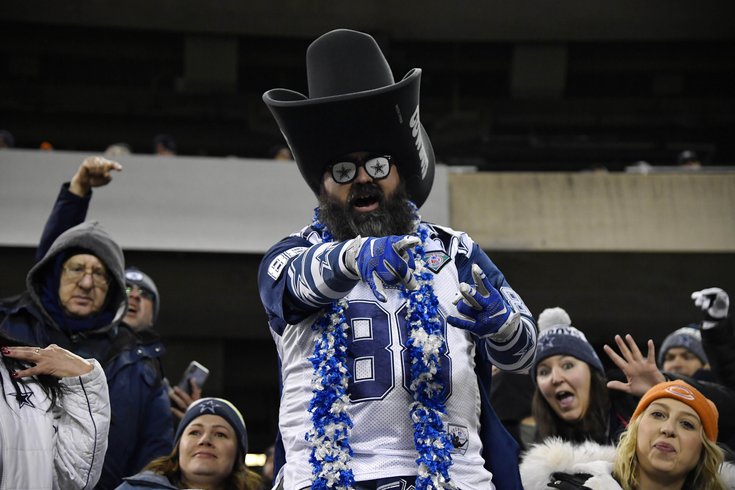 Dallas Cowboys fans make rooting against their team rather easy.

It would be hard to argue that any other city's sports fans bring the passion more than Philadelphia's does. And because of that, we have bones to pick with quite a few franchises.

Even without games currently being played in any of the four major sports, simply naming the teams we are about to name will no doubt bring some feelings.

We know you miss hating on opposing teams during our current sports dry spell, so lets take a journey through the top 10 most hated Philly sports teams:

The Eagles have not beaten the Seahawks since 2008, having faltered in their last six straight games against Seattle. Their two most recent setbacks both came in 2019, as they first lost a 17-9 regular season battle at home, and then lost by the exact same score a month and a half later in the NFC Wild Card.

That most recent game was particularly difficult to take, as a "cheap shot" from Jadeveon Clowney ended Carson Wentz' season. The Eagles also reportedly passed on Russell Wilson, one of the best quarterbacks in the league over the last almost decade. The two play again in 2020.

This became a rivalry again in 2010, when Jayson Werth took more money to play in Washington. It was a running joke around that time that National's Park was Citizens Bank South, as so many Phils fans traveled to see the team there it made it feel like a home game. The duel kind of cooled a bit as the Phils fell out of contention, but has gotten a little more intense in the last two years. That's because the Phillies signed the Nats' all-time best player in Bryce Harper.

The Nationals, the year after losing Harper in free agency, went on to beat the Astros to win the 2019 World Series, putting a target on their backs once again. If the 2020 regular season does commence, Philly's games against the Nationals will take on a big level of importance and should have some juice.

Simply being an NFC East team is enough to make this list — that's how ferocious Eagles fans are. But the 'Skins are eighth because they haven't been good in several years, and the last time they won a game against Philly was four years ago. Since 2016, the Eagles have won six straight, out-scoring their neighbors to the south 185-108. The DC defense has been positively atrocious with the Birds scoring almost 31 points per game over that span.

That could change. With their first-round pick this year the Redskins selected beastly defensive end Chase Young, who will join Ryan Kerrigan and recent pass-rushing picks Montez Sweat, Daron Payne, and Jonathan Allen. Their front four could give the Eagles some more trouble this season, but until they find a franchise quarterback Philly should continue to dominate.

The Braves aren't a team that is hated in quite the same way as, say, the Cowboys are in Philadelphia, but Atlanta's young and talented core is going to make it hard on the Phillies for years to come as the Phils try and get back into playoff contention again.

The thing that makes the Braves easy to hate is how they pretty much took the Phillies' rebuilding model and did it better. Both teams were absolutely dreadful from 2014-2017 but Atlanta proved to have a much better front office. They made better draft picks, better international signings and moved on from the core players who led them to playoff berths in 2010, 2012 and 2013 at the right time. They turned their 72-90 record in 2017 into a 90-72 record a year later. Last year they won 97 games. By contrast, the Phillies have not had more than 81 wins since 2011. Frustrating.

We've reached our first truly great historical rivalry. It's also the first of three NY-PHL rivalries on this list. The Flyers and Rangers have dueled in 11 playoff series dating back to the 1974 Eastern Semis (the Flyers won in seven en route to the Stanley Cup). More recently, the Flyers faltered in a Game 7 vs. the Rangers in 2014.

The two are in the same division, the Metro, and are geographically very close. Due to that fact alone the two are rivals. With the Flyers having ended the regular season — or what was played of it — amid such a hot streak they are currently on a three-game winning spurt against the Rangers.

The Phillies and Mets don't really ever seem to be good at the same time. At least not since the Phillies' epic comeback to end the 2007 and 2008 regular seasons to knock the Mets out of the playoffs:

As you'll no doubt notice, both teams have been pretty mediocre the last few years but they certainly have history. After each team spent time as spoiler for the other in the 1980s and 1990s, the two really got into it in 2007 when Jimmy Rollins said the Phils were the team to beat in the NL East, and the Mets proceeded to blow a seven-game lead with 17 to play that following September. The next year, the Mets and Phils went back and forth for the division before New York was eliminated in their final game ever at Shea Stadium. Rebuilds and injuries have since slowed down the rivalry.

They call it the 'battle of Pennsylvania' when these two hockey-crazy cities see their teams do battle on the ice, and the clubs have tangoed relatively frequently in the postseason, facing off four times since 2008. Their outdoor game at The Linc in 2019 was an overtime thriller that had everything one one want from a hockey game. So many of the Flyers-Penguins match ups provide a punch, with players and fans always ready to rise to the occasion.

One of the best parts of the rivalry in recent years has been Sidney Crosby, the Pens MVP center who has riled more than a few boos from Philly fans. Crosby has played 70 career games against the Flyers, more than any other opponent. In those contests, he has scored 105 points, the second of two teams (the Devils) he has 100 or more points against. His 43 goals against Philly are his most against any team by a long shot. For whatever reason, Flyers fans screaming that he sucks seems to get under his skin and get the best out of him. They'll probably never learn.

*While they don't have any regular season matchups this year, if the 2019-2020 regular season doesn't resume and they go right to the playoffs, the Sixers and Celtics would face off as the 6 vs. 3 matchup in the East.

This truly is a storied rivalry. The Sixers and Celtics have done battle in meaningful playoff series over six decades now, beginning with the 1950s (which were dominated by the then Syracuse Nationals), the 1960s, (dominated by Bill Russell who bested Wilt Chamberlain six of seven times) and the 1980s (which saw Julius Erving and Larry Bird split postseason battles 2-2). The Iverson Sixers lost to the Celtics in 2002, and the pre-Process Sixers lost in seven games in 2012. In 2018, the post-Process Sixers faltered against the C's in the second round.

The modern rivalry between these two teams is extremely complex. Most of the fuel stems from the 2017 NBA Draft that saw the Sixers swap their third overall pick with the Celtics to take Markelle Fultz at No. 1 overall. Danny Ainge and Boston's front office seemed to "trick" Philly into trading up with them, as they appeared set on taking Jason Tatum regardless. Adding insult to injury (kind of literally?) the Sixers spent a boatload of money on former C's center Al Horford, who definitely appears to be past his prime now in Philly. Whether Ainge had any idea what a disaster Fultz would be is hard to really say, but the Sixers have had renewed animosity ever since.

Yes, the Eagles have been recently dominant, winning seven straight games against their I-95 NFC East rivals, but history is what makes this match up so much more hate-filled than the Eagles-Redskins rivalry. There are almost too many memories to recap, but we'll list our favorite few here:

• That time in 1960 when Chuck Bednarik ended Frank Gifford's career

• The Miracle at the Meadowlands, Part 1 in 1978 when the Giants failed at taking a knee, fumbled, and lost

• The Miracle at the Meadowlands, Part 2 in 2010 when DeSean Jackson had a walkoff punt return touchdown

The Eagles and Giants always seem to bring drama when they face off. Currently, New York is in the midst of a rebuild as the Eli Manning era is finally over and a mess of a management team tries to get the most out of Saquan Barkley before he gets too much mileage on him.

It's a joke that's been made by Philly fans for decades — that their second favorite team is whoever is playing the Cowboys, but it really is true. This city absolutely hates Dallas. From the Bounty Bowls of the 1980s to more than a few de facto NFC East Championship games, there is no shortage of "playing for keeps" when it comes to these two teams.

In the past decade, the Eagles and Cowboys have split their season series seven (of 10) times, with the away team winning six times in a row from 2013-15. The rivalry has been renewed generation after generation, with the current iteration pitting the two best (and only) good teams in the NFC East. Which quarterback is better, Dak Prescott or Carson Wentz? Which offensive line is supreme? Is Ezekiel Elliott on a course to becoming the next most hated player for Eagles fans (the last one was probably Tony Romo... or maybe Dez Bryant)? No player will ever be hated more than Jerry Jones, the Cowboys eccentric owner. And Jones will never be more hated than Cowboys fans, who travel well and who seem to be located everywhere due to the team's success in the 1990s and prominent TV coverage.

Dallas Weeks are the two most important on the Philadelphia sports calendar every year. It's doubtful any team on this list will ever have a chance at unseating Big D from being the most hated Eagles opponent.

Honorable mention: Philly fans also hate the New England Patriots, the Boston Bruins, the New Jersey Devils, the New York Yankees, the Los Angeles Dodgers, and the Los Angeles Lakers, but each fell short of being considered top 10 most hated.