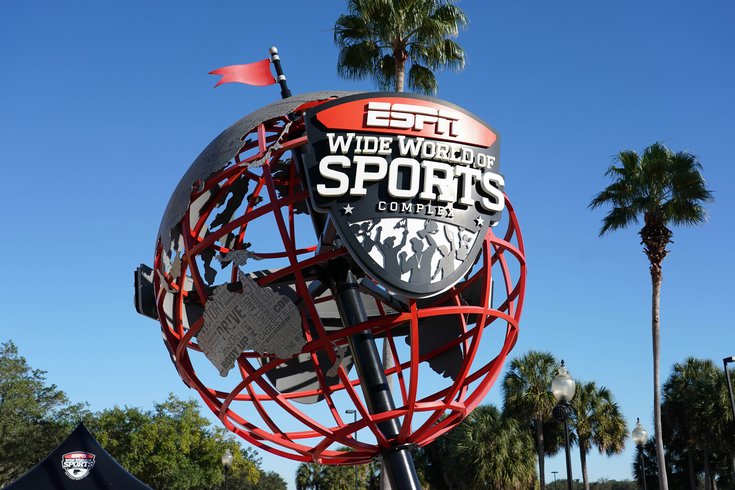 General overall view of globe at the entrance to ESPN Wide World of Sports.

Orlando's Walt Disney World has emerged as the "clear frontrunner" to host the NBA's eventual restart of the 2019-20 season, according to a new report from Shams Charania and Sam Amick of The Athletic. Despite competition from other markets vying for the right to host the league, including Las Vegas and Houston, Mickey Mouse appears to be too powerful a man to turn down.

Perhaps more notable is the emergence of a potential return timeline for the league, which has tried to avoid being married to a specific timeframe for a variety of reasons. But Amick and Charania suggest a mid-June training camp with a mid-July restart is the most popular idea that has been floated internally.

The NBA is in serious discussions with Disney about the property, which has gained clear momentum over cities such as Las Vegas, sources said. It remains unclear when the games would begin, but multiple sources say the prospect of players fully training in mid-June and playing by mid-July has been the most popular and possible scenario discussed. NBA commissioner Adam Silver told the Board of Governors on May 12 that he aims to decide on the season in two-to-four weeks, and that he wants to wait as long as he can to make final decisions.

While the league has explored the possibility of holding games in multiple cities, it appears likely that Orlando would be a sole host. Sources confirmed that Houston has also received serious consideration as a host city, but Orlando is on track to win its bid so long as final details regarding testing and hotel use are resolved. For the NBA, Orlando/Disney World’s controllability as a playing site — with a private property having the necessary complexes, hotels and amenities — has been the most appealing of all the possibilities all along.  [The Athletic]

This tracks with reported timelines for other American sports, specifically Major League Baseball, who approved a proposal last week planning for a start in early July. There have been other hurdles for baseball stemming from that agreement, most notably a battle over compensation between owners and players, but all parties are interested in somehow bringing back the sport in one way or another.

Additional reporting from ESPN's Zach Lowe and Adrian Wojnarowski lends credence to the timeline here, with Wojnarowski tweeting Wednesday that beginning in June, teams will be able to begin recalling out-of-market players for expanded workouts in their practice facilities leading into a formal ramp-up period

Reporting with @ZachLowe_NBA: NBA teams are expecting the league office will issue guidelines around June 1 that will allow franchises to start recalling players who’ve left their markets to return as a first step toward a formal ramp-up for the season’s resumption.

While keeping in mind that this situation could change at any given moment, pending outbreaks, improved test availability, or a variety of developments on either end of the spectrum, the need for a training camp type period is going to be a requirement for the NBA to come back. Players around the league have had to work within the same restrictions as the rest of us, albeit with access to better at-home equipment, and some guys have even lacked access to basketball hoops for the duration of the shutdown.

The Sixers, for what its worth, have spent a lot of time working on this issue and studying any relevant data to prepare for a comeback.

The NBA placed restrictions on how much teams could provide for their players (a rule meant to avoid owners circumventing the salary cap), but Philadelphia provided equipment like resistance bands, bikes, and even elliptical machines for players to use in their homes while they lacked access to gyms. Lockout seasons that started late and featured abbreviated preseason periods have been studied internally, with the Sixers aware of the increased threat of injury in those years.

"The runway that you have to go play basketball again, I know will be thought through as it relates to the players' health, and I'm not talking the virus health," head coach Brett Brown said in a conference call last week. "Three weeks as the minimum window is the duration, timeframe I'm hearing the most. My personal opinion would mirror that. I think the notion of how do the players come in influences kind of everything...the three-week thing I think can be achieved, provided the fitness base of the players coming in is at the standard I'm saying it needs to be."

Philadelphia's head coach and GM have said nothing but positive things about their two franchise players, praising Joel Embiid for his commitment to staying in shape and Ben Simmons for attacking his rehab with a vengeance during the down period. But that will ultimately have to be proven on the hardwood, rather than a video conference call.

With Embiid's own admission that he can struggle to stay in peak shape without the benefit of regular games, his fitness coming out of quarantine is perhaps the biggest story to watch for the Sixers.

"He's got a real desire to be at a playing weight that equals his best since he's been in the league," Brown said. "With the restrictions everybody has, if you live in a home and you've got a yard, or a one-bedroom apartment and have to take those parameters into account, our medical staff and strength and conditioning staff have been all over that part of it. We give the players, within the reality of what they have to work with, the best we can give. Both [Embiid and Simmons] are in good places."

And there are a number of other considerations here too. Do the Sixers lose more value in a neutral-site playoff than most teams do, given their discrepancy between home and road performance, or does it level the playing field for everyone? Does resetting season-long momentum weaken their competition, or does their own inability to build chemistry to date leave them behind the eight ball?

For now, we're still a long way from answering those questions. But it appears we're drawing closer to the league's return, and debates about whether star players should have been riding Space Mountain in the hours before a pivotal game.