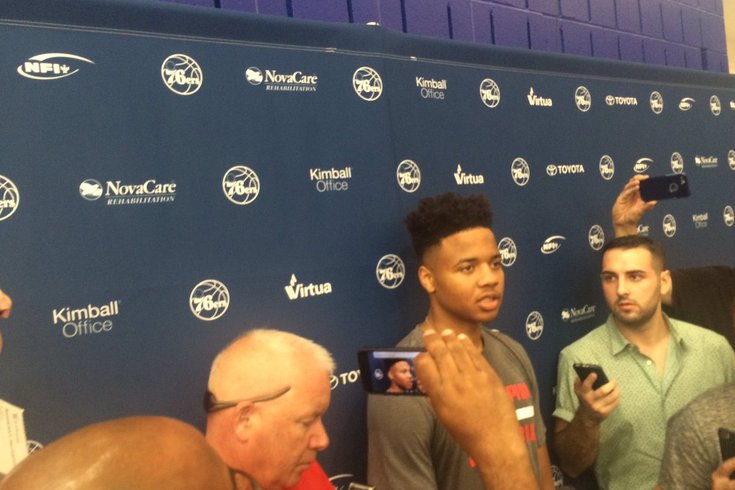 Markelle Fultz speaks to the media after his Sixers workout.

A couple of weeks ago, the prospect of Markelle Fultz walking into the Sixers practice facility in Camden for a workout seemed very unlikely. But Saturday night, as a potential blockbuster trade with the Boston Celtics is reportedly being discussed, the projected top overall pick in the 2017 NBA Draft was in South Jersey.

Here's @MarkelleF walking into the building with his #Sixers cap. Photo by the GREAT Yong Kim. pic.twitter.com/YRBznX2uNg

When Fultz was asked how his last few days have gone, with all of the late trade rumors and speculation concerning where he might end up, he answered honestly about the two-day process (no pun intended).

“I’m just anxious to get to [draft] day and just get it over with so I can know where I’m going and put full investment to whatever team I’m going to.”

With plenty of members of the Sixers roster, coaching staff and front office in the gym on a Saturday night, the University of Washington guard worked out in front of them. It remains to be seen if the Sixers and Celtics can land the plane and the trade becomes official, but here’s what we saw and heard from Fultz.

•    Compared to what we the Sixers had in store for Malik Monk and De’Aaron Fox, this was a light workout. You could say that this was the type of workout that the only the potential top overall pick can agree to. From what we saw, Fultz went up and down the floor a few times and took some jumpers:

•    So, how did Fultz shoot? Like Phillip Seymour Hoffman in Along Came Polly.

Obviously, the on-court work was by far the least important part of Fultz’s trip. The Sixers mostly want to talk to him and get his medical information.

“I think it would be pretty cool just being with a young team,” he said of potentially getting drafted by the Sixers. “The upside of it would be crazy and like I said, I’m close to home so a lot my friends could show love. This city has great fans.”

•    Fultz said it was about a three-hour drive from his home Maryland. In terms of possibly being tired, he said, “Not really, I mean it’s almost like AAU, driving out of town wherever you’re going to play some AAU games. Like I said, it’s something I love to do and any chance I get an opportunity to do it, I’m going to be excited.”

•    See that Sixers cap that he had on in the picture up above? That was one Fultz already owned.

•    When asked about potentially playing with a ball-dominant guard in Ben Simmons, Fultz didn’t sound worried at all. Then when he was asked about how he could fit in the Sixers system, Fultz mentioned their emphasis on defense.

I found that interesting, because while Brett Brown and his staff have done a nice job on that end of the floor, Fultz didn’t show much defensively at Washington. He certainly has the tools to be a good defender, but Fultz needs to make a commitment to actually playing it in the NBA.

•    When his visit to a Sixers game at the end of the season was brought up, Fultz said he was impressed by the fan support at a meaningless game against Brooklyn.

“I think it would be pretty cool just being with a young team,” he said of potentially getting drafted by the Sixers. “The upside of it would be crazy and like I said, I’m close to home so a lot my friends could show love. This city has great fans.”

This should be legendary if it happens #TheProcess pic.twitter.com/234a42aoZW

•    Fultz didn’t seem to know about (or at least didn’t want to reveal) the rest of his itinerary in Philly, specifically if he would dine with the Sixers brass. But there is one thing he’s going to do.