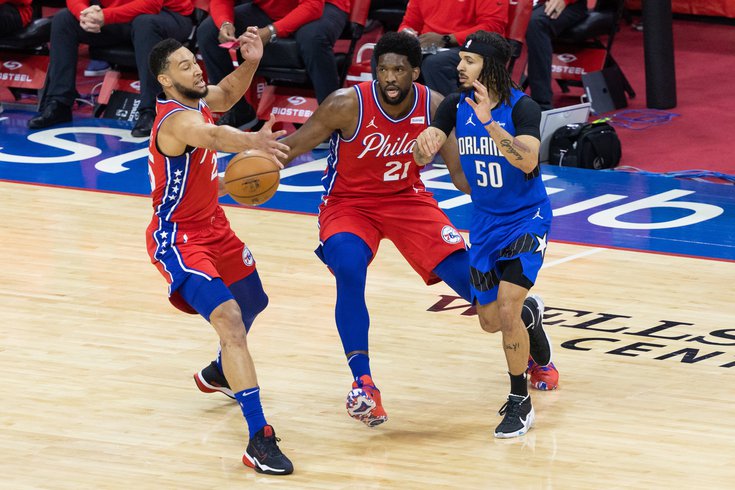 Sixers guard Ben Simmons, center Joel Embiid, and backup wing Matisse Thybulle were all named to the NBA's All-Defense teams on Monday night, a reflection of Philadelphia's tremendous defensive season and the embarrassment of riches they have on hand to get stops. Simmons was named to the first team, while Embiid was joined on the second team by Thybulle.

For Simmons, it is the second consecutive year he has been recognized as one of the very best defenders in the NBA, and no surprise considering his bid for the league's Defensive Player of the Year award. Though he lost out on that honor to Rudy Gobert, Simmons was undoubtedly one of the five best defenders in the league this season, and an easy choice for the honor.

After some hot and cold stretches on the defensive end early in his career, Simmons has become a night-to-night leader on Philadelphia's elite defense, taking on top assignments whenever asked and shutting guys down with regularity. He got the credit he deserved from voters — Simmons was joined by Gobert as the only two players to be selected to the first team unanimously.

Neither of the other two names are surprises, though they had factors working against their cases if voters had decided to look at it differently.

The almighty retort of "games played" was not enough to keep Embiid off of one of these teams, and that allowed him to make the third All-Defense team of his career. Embiid has continued to have a dominant statistical impact on the floor for Philadelphia, and that's on top of the things that don't necessarily show up on paper — the drives that fizzle out, the kick outs that come when players fear him in the paint, and the number of makes in the lane that come on difficult shots over his length. Embiid being able to play MVP-level ball on offense while remaining one of the league's best defenders is a testament to the pride he takes in shutting down opponents.

Thybulle, on the other hand, is an absolute menace but was fighting an uphill battle in some respects as a bench player for the Sixers. But it's impossible to deny his impact when he's on the floor, with the young wing coming up with steals, deflections, and hustle plays at a level comparable to guys who play more minutes than he does, a no brainer in on-court merit. Thybulle's 20 minutes per game are the fewest of any player to make an All-Defense team (the next fewest were Bobby Jones' 20.4 for the Sixers in 1984-85).

As it turns out, Thybulle was not in much jeopardy of being left off when the votes were all counted — the second-year wing received 20 more vote points than Kawhi Leonard did, who received the lowest point total of any player on the two teams. This would seem to bode well for Thybulle moving forward if we assume his role expands over time, with his name and his game already recognizable to people around the league. I think we all probably expect him to be a fixture on these teams moving forward.

The full rosters for both teams:

The full voting results for the 2020-21 NBA All-Defensive Team are below.

The Sixers may not have won the big hardware they were hoping for, but this is an honor that their head coach and members of the organization might argue is more important than MVP trophies and Defensive Player of the Year awards. Being able to fill up the All-Defense teams with guys from one team usually means one thing — people don't like playing against you, especially when it's playoff time.