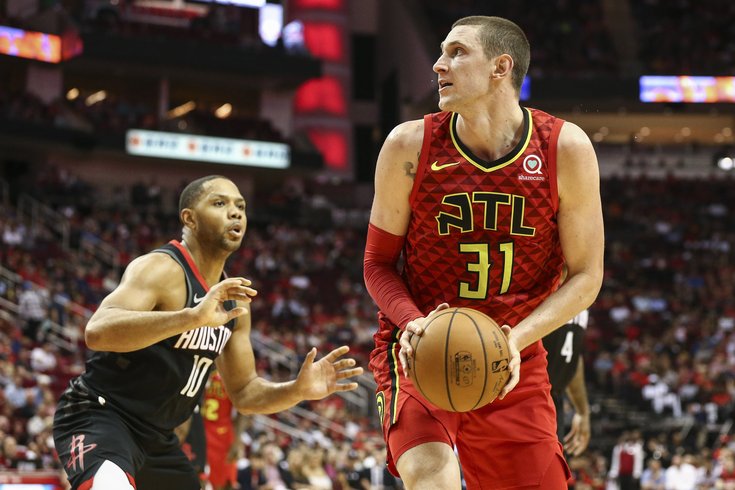 As part of the Carmelo Anthony trade executed by the Oklahoma City Thunder, the Sixers have acquired Atlanta Hawks big man Mike Muscala in exchange for a pair of their young wing players, a team source confirmed to PhillyVoice on Thursday afternoon.

Former first-round pick Timothe Luwawu-Cabarrot will be sent to the Oklahoma City Thunder, while swingman Justin Anderson will reunite with former Sixers assistant coach Lloyd Pierce in Atlanta. Chris Vivlamore of the Atlanta Journal-Constitution was the first to report Philadelphia's involvement in the trade.

On the surface, it seems like a bit of an overreaction to the situation that unfolded with former Wolves stretch big Nemanja Bjelica over the past week. After initially agreeing to terms with the Sixers on a one-year, $4.4 million deal early in free agency, the Serbian big man backed out of the agreement earlier this week under the guise of focusing on family. Reports followed that suggest he's chasing a more lucrative offer with the Sacramento Kings.

In sudden need for a stretch big off the bench, the Sixers appear to have found their replacement. Muscala is a career 37.8 percent shooter from beyond the arc, and, unlike Bjelica, can play more of a hybrid role between the four and five spots as Ersan Ilyasova did during the stretch run last season. That much is valuable, and Muscala isn't necessarily a total sieve on defense, either.

With where the league is headed, the question is whether that skill set is worth punting on the development of two young wings. Granted, neither of Anderson or Luwawu-Cabarrot is especially young, with Anderson turning 25 in November and TLC having turned 23 in May. Neither has exactly shown out in the time they've been given so far in the NBA.

However, the general archetypes Anderson and TLC represent are the sort of guys the Sixers really should be holding onto and trying to develop. Their problem in the playoffs was generally not that they needed stretchier bigs, but that they had a complete dearth of competent wings to put on the court. Boston burned the Sixers over and over again by targeting the weakest links in their perimeter defense.

Were Anderson and TLC going to develop into guys who can alleviate that problem? Maybe (perhaps probably) not. It's still discouraging that Philadelphia's developmental program hasn't managed to turn up a trustworthy backup behind Robert Covington over the last few years. And with the Sixers now turning to younger options to step into those roles, the cycle begins anew.

If we're splitting hairs, I would posit that Anderson is the bigger loss here, even if that's ultimately splitting hairs. He's the only one between the two who was ready to compete in a playoff atmosphere, and though his defense was ultimately overrated he was at the very least a consistent competitor on that end. In an outcome where the Sixers decided to play smaller more this year — which I advocated for the other day — he would have been a useful, switchable player to throw into funky lineups.

As we discussed recently, Anderson and Luwawu-Cabarrot were likely candidates to be victims of the roster crunch anyway, so moving both and bringing in a player whose skill set they clearly want is a productive move for the team. The Sixers have a lot of developmental minutes to distribute this season anyway, particularly between Zhaire Smith and Markelle Fultz, and it should come as no surprise that they're seeking to solidify the rotation with dependable players around them.

This move should also tell you that despite some pleas from fans and media alike (ahem), Brett Brown is focused on playing some more "traditional" lineups with this group. It's not a decision I necessarily agree with — I think the Sixers are limiting the potential versatility a team built around Ben Simmons can lean into — but it's not indefensible. They need shooting wherever they can get it, including at either big man spot.

And so an offseason of unspectacular moves marches on for Philadelphia. The Sixers have done a perfectly fine job upgrading their bench relative to where it started last season, but if you came into this summer expecting something spectacular, you're ultimately going to walk away waiting for another shoe to drop.