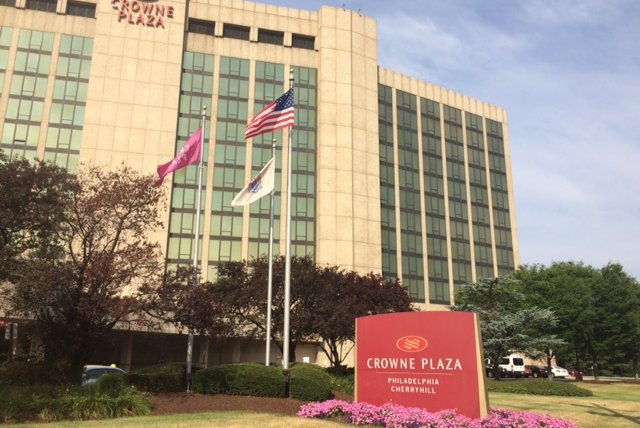 When making plans to house state delegations to the Democratic National Convention, not a single hotel in South Jersey was booked by the DNC. The state of Oregon's delegation, for instance, is staying at a Crowne Plaza Hotel in Valley Forge, which is at least 45 minutes away from the convention site -- and double that on bad traffic days. The Crowne Plaza in Cherry Hill, on the other hand, is about 19 minutes away from the Wells Fargo Center.

That’s what happened to hotels in South Jersey when it came time for the Democratic National Convention Committee to arrange lodging for nearly 5,000 delegates.

Not one of the 57 state delegations to the mega-event, which begins Monday at the Pennsylvania Convention Center in Center City and the Wells Fargo Center in South Philadelphia, is booked into a hotel room in nearby South Jersey.

The snub has some real logistical consequences.

The New Jersey delegation is, for instance, relegated to accommodations near the Philadelphia Airport.

And then there is the Oregon delegation.

They are staying at the Crowne Plaza hotel in King of Prussia, Montgomery County, about a 50-minute drive away from the South Philadelphia arena. But as any veteran commuter can tell you, traffic into Philadelphia via the Schuylkill Expressway is unpredictable and can easily double commuting times.

The commute to the Courtyard by Marriott hotel in Lansdale, Montgomery County, which is hosting delegates from Guam, Northern Mariana Islands and American Samoa, is even longer.

On the other hand, the Crowne Plaza Hotel on Marlton Pike in Cherry Hill – it dubs itself the “Philadelphia-Cherry Hill Crowne Plaza” – is less than 20 minutes away from the arena. And traffic from Cherry Hill to South Philadelphia is typically less of a hassle because there is more than one route.

“If there is an accident on the Schuylkill Expressway, you can forget about it,” a cab driver waiting for a fare outside the Cherry Hill hotel said Friday. "You would need a helicopter to get to South Philadelphia. From here, there are two bridges and more routes. On the expressway, there are no options, no good alternative routes.”

Repeated requests by PhillyVoice to explain why New Jersey hotels were not included among the delegate hotel selections were not answered by the DNCC over the course of two days.

The management of Crowne Plaza in Cherry Hill, which also operates the hotel where the Oregon delegates are staying, did not respond to repeated requests for comment on the snub. Nor did several other hotels in South Jersey and the New Jersey Hotel and Lodging Association in Trenton.

Ed Grose, executive director of the Greater Philadelphia Hotel Association, which includes parts of South Jersey, said the DNCC planned and booked the delegate room blocks on its own, without assistance from the association.

One consequence of the DNC’s exclusive use of Pennsylvania hotels is that convention staffers, tech personnel and journalists are largely staying in New Jersey hotels.

The cabby at the Cherry Hill Crowne Plaza, for instance, said he delivered four engineers to the Wells Fargo Center early Friday morning.

In 2000, when the last convention in Philadelphia was held – by Republicans – delegates were housed not just in Pennsylvania, but in New Jersey hotels, some as far as Atlantic City’s casinos.

And while Atlantic City is nearly 60 miles away from Philly, a bus ride from the resort – where presumptive candidate Hillary Clinton has derided the business practices of her Republican rival, former casino-owner Donald Trump – to Philadelphia is about an hour long and an easier commute than driving from King of Prussia to Philadelphia on a bad traffic day.

Because the DNCC is stonewalling, there's no word on whether or not Trump's alliance with New Jersey's governor, Chris Christie, may have influenced the decision to not house delegations in the Garden State.